Share All sharing options for: Louisville Starts March To Atlanta With Blowout Of North Carolina A&T

Unlike the last time Louisville was the NCAA Tournament's No. 1 overall seed, there were no uneasy moments for the Cards on Thursday night in Rupp Arena.

Paced by Russ Smith's 23 points and eight steals, U of L dominated North Carolina A&T in a game they never trailed. Wayne Blackshear chipped in 12 points, while Peyton Siva notched eight assists and four steals. As a team, Louisville recorded 20 steals and turned the Aggies over 25 times.

--Dark Slime received a standing ovation inside Rupp Arena tonight. That is all.

--Chane Behanan told Kent Taylor earlier in the day that he thought the game would be a "dunk fest." He then proceeded to record an offensive goaltend and embarrassingly blow a breakaway dunk in the game's first 10 minutes. Pump the breaks on the pregame talk, my man.

Stephan Van Treese on Chane Behanan's missed dunk: "I expect those out of me, not Chane."

--Denny and the bird mask: 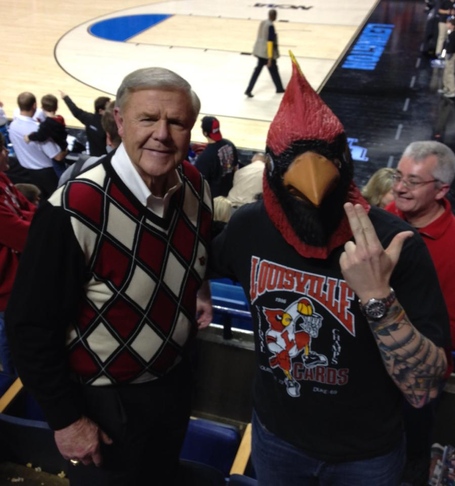 --Montrezl Harrell is one of the five coolest people on the planet.