Share All sharing options for: Ten Belated Thoughts On A Big East Championship

It feels like the Big East championship was won three weeks ago, but there are still a handful of quick thoughts I'd like to send out to the Interwebz before we dive headfirst into the mayhem that the next (hopefully) three weeks will bring.

1. I'm quite certain that I'm not the first to make this comparison, but Trez's performance on Saturday was insanely similar to Kyle Kuric's against Syracuse in the last game at Freedom Hall. Obviously, they did their damage in different ways, but the surprise, the emotion, the fact that it just kept coming; it was almost eerie.

Outside of helping us to one of the more memorable wins in recent memory, the other big thing about Harrell's performance is that it instills confidence in a player Louisville is going to need early on in the tournament. I think U of L's Round of 32 opponent is probably going to be Colorado State, a team which makes a living off of beating opponents on the glass. With Chane in such a rebounding slump, having Trez entering the tournament on such a high couldn't be more important. He might be relied on more heavily than we could have imagined a couple of weeks ago.

2. Also, how about the alterations to Montrezl's free-throw form? He showcased a completely new style with an exaggerated staggering of his feet, and he responded by burying 6-of-9 attempts from the stripe. Almost as important was the fact that his three misses were more or less on target. There were no more airballs or glass chippers.

Kudos to both Trez and the staff for working hard to improve this.

3. The Rick Pitino/Kevin Ware ass slap is one of the five best moments of the season so far. 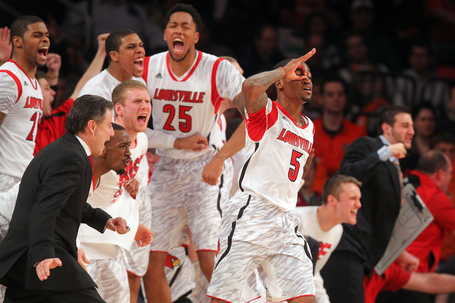 4. Three notable records that I don't think we've had a chance to mention yet on here:

--Peyton Siva and Patrick Ewing are now the only two men to have ever won back-to-back Big East Tournament MVPs.

--Siva is also now U of L's all-time leader in steals.

--Russ Smith has set the Cardinal record for most made free-throws in a single season.

5. The best text message I've gotten this postseason comes from Card Chronicle Big East Tournament Correspondent Eric Wood, who dropped this gem after Louisville cut the lead to one in the second half:

"If Trez has another dunk look for my jeans on the court."

This put him ahead of previous leader/consistently questionable decision-maker "Dan," who threw out: "do me little rick" after Florida International's upset of Middle Tennessee in the Sun Belt Tournament.

So congrats to Eric.

6. How does Zach Price keep slipping out of his warm-up undetected? He's the David Blaine of bench magicians.

7. Steve Andress with a good wrap of the night/tournament:

Dead. Even last year. Dead. Nobody else. Us.

8. Luke Hancock will head into the NCAA Tournament having hit 17 of his last 32 three-point attempts. In addition to that, he was our best halfcourt defender for stretches on Saturday night. On two separate occasions he single-handedly kept Michael Carter-Williams from getting to the basket, once knocking the ball away from him and creating a steal. This was something the smaller Russ Smith and Peyton Siva showed no signs of being able to do during the first half onslaught.

I'm not sure the fan base has ever done a bigger 180 on a guy in a single season. There have been times where U of L fans have been hard on star players whom they've thought to be underachieving a bit, but this is different. The consensus two months ago was that Luke Hancock didn't deserve to wear a Louisville jersey, and the consensus now is that the Cards probably can't win a national title without him...and that he has the biggest balls in the city...I added the last part, but try and disagree with me.

9. For all the dunks and momentum plays on Saturday, my favorite moment was the shot of the bench after Trez missed the first of two free-throws early in the second half. The shot showed Kevin Ware, Chane Behanan and Wayne Blackshear all up out of their seats, clapping enthusiastically and shouting words of encouragement.

Those three or four seconds said all that needs to be said in terms of what this team is all about. At the time, I thought we were going to lose the game convincingly, and that moment still made me optimistic about the weeks ahead, and totally at peace with the state of the program.

This might be the best "bench" team I've ever cheered for. The enthusiasm is contagious. From a guy like Logan Baumann, who thought he was going to be a student manager on this team before the season, to a former McDonald's All-American like Wayne Blackshear; everyone is into the game at all times. No one sulks, no one looks as though they're secretly hoping the guy playing their position screws up, no one ever looks for a second like they aren't totally invested in the team achieving its ultimate goal.

There's never been an easier time to be a Louisville basketball fan than right at this moment.