Taylor Forns and his crew have been there for Gorgui with their Senegal from the beginning. They've earned this CC moment out front.

For those who have asked, Louisville's open practice inside Rupp Arena will take place between 4:25-5:05 on Wednesday. The U of L student athletes will have their media press conference from 3:45-4 p.m. on that same day, and Rick Pitino will be at the podium from 4-4:30. You should be able to catch both live on ESPNews.

In every tournament I can remember, Louisville has either played its opening game during the first session on Thursday or the last session on Friday. This being the case, I'm not really sure how to approach a Thursday evening game at 6:50. There's going to have to be a routine that I'm completely unfamiliar with, which kind of excited me.

The cover of Monday's USA Today....just like we all predicted. 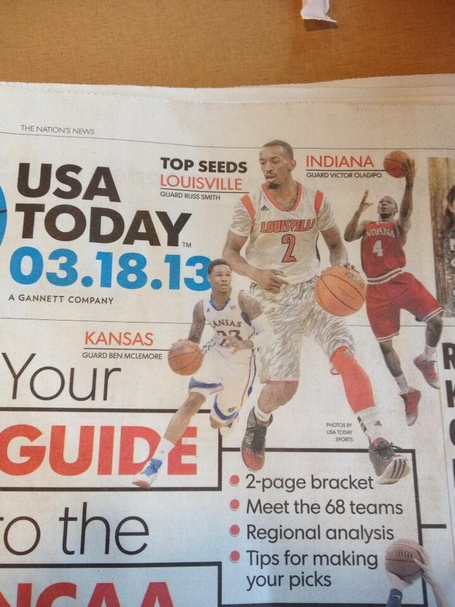 In other news we all saw coming, Russ Smith is in Cosmo for being one of the "hottest guys of March Madness 2013." 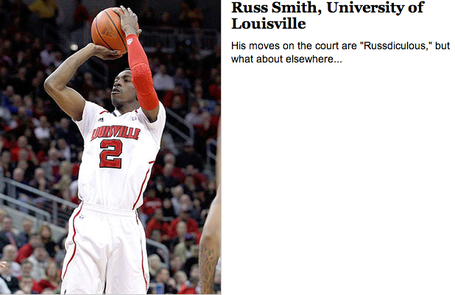 I'm not sure life gets better than that blurb.

Somewhere today, Elisha Justice saw this, looked out into the distance, cracked an ever-so-slight smile before pulling it back in, and then nodded slowly to himself.

The Louisville women's team found out on Monday that it has earned a No. 5 seed in the NCAA Tournament. The Cards will host 12th-seed Middle Tennessee (25-7, 17-3 Sun Belt) at the KFC Yum Center in the first round of the tournament on Sunday, March 24 at approximately 2:30 p.m. The game will be televised on ESPN2.

Tickets can be purchased through Ticketmaster.com or by calling any Ticketmaster outlet, including the KFC Yum! Center box office. All-session tickets for adults are $32 and $18 for youth/seniors/college students.

Fans without an allegiance are hopping on the Cardinal bandwagon just because it feels like the right thing to do.

Cardinals starting point guard Peyton Siva had it rough as a kid. According to a November ESPN article, the Seattle-native grew up surrounded by gang violence in a household where his mother worked three jobs to support the family. His father struggled with drug and alcohol addiction, and spent time in and out of jail.

At age 13, Siva taught himself how to drive, and went looking for his dad after he'd gone missing one night. He came across the elder Siva in a drug den, holding a handgun. That was the night Peyton successfully talked his father out of killing himself.

Peyton then dedicated his life to basketball, ignoring persistently disparaging remarks about his size. This month, the 5'10" point guard will try leading his team to an NCAA championship.

How can you not root for this kid?

I understand my position is questionable from a fan perspective. Is my support of the Louisville Cardinals devoid of any personal or geographical connection to Kentucky? Yes. Am I a bandwagon supporter? Yes. Will Louisville basketball even cross my mind once the NCAA tournament is over? Probably not.

But this is March Madness, people. Everybody needs a team to root for.

Join me on the Cards bandwagon. You won't regret it.

Liberty has opened as a 1.5-point favorite over North Carolina A&T in the battle for the right to play Louisville. We'll have an open thread for the game, which tips off tomorrow night at 6:40 on TruTV.

Tom Jurich is a finalist for the Athletic Director of the Year award, which would be the second most prestigious honor he's received over the past four months.

A quick note from the world of Cardinal football, where Wednesday's planned open practice has been closed due to bad weather. U of L will still hold open practices on Friday at 3:45 p.m. and Saturday at 7:45 a.m.

Today on "Around the Horn," Woody Paige - a professional sportswriter who was doing a job he received compensation for - made the statement that Louisville - the team with the highest adjusted defensive efficiency rating in the history of Ken Pomeroy's 20-years of tracking such things - "just isn't that good defensively."

Adding to the CCBM's big weekend, here it is at Big Russ' Barber Shop: 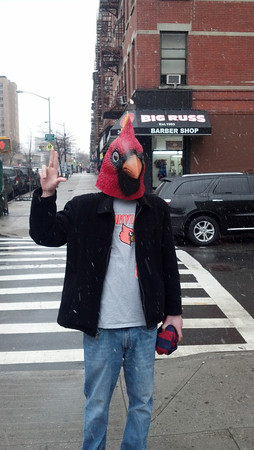 I picked the same championship game and champion as Joe Lunardi. The irony is not lost on me.

In honor of March Madness and the Cards being the tournament's No. 1 overall seed, GQ has posted a "Louisville Playlist" in its #NowPlaying section.

For all those who have asked, yes, I saw it.

I'm also very aware that when they were reading the comments, Darius saw all the ones about Card Chronicle that were at the top at the time.

I think I'm finally ready to back off of Washington. He seems like he's turned into a humble dude, which I didn't think was possible during his stint at Memphis or the first couple of years after. Good for him.

Nate Silver, who's best known for getting basically every prediction about the last presidential election correct, has a Final Four of Louisville, Gonzaga, Indiana and Florida.

I'm still amazed by this stat: 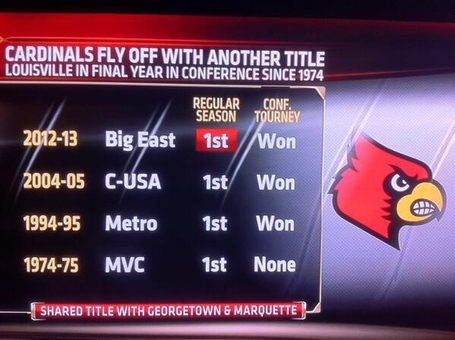 If you hadn't heard, Kentucky didn't make the NCAA Tournament and Big Blue Nation isn't thrilled about it.

Check out THE rickmbari in his element and showing off his inner-CC at the same time.

Quick reminder that our bracket challenge is live and ready for business...so to speak.

For those heading to Lexington this weekend, here's a good guide to Fayette County for Louisville fans. 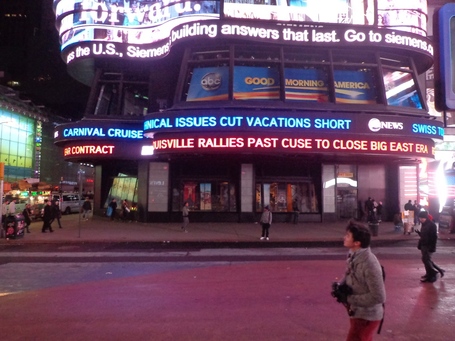 Mike DeCourcy of The Sporting News says that while Louisville is the best team in the NCAA Tournament field, it's Indiana who is the most likely to win it all.

The NCAA Tournament run of Chris Jones' Northwest Florida State team began without him on Monday. The future Louisville point guard was forced to sit out the game after being hit with two technical fouls in the Raiders' last game at the Region 8 Tournament. They still advanced by a score of 81-54, and Jones will play in the team's next game on Tuesday. You'll be able tow watch that one live online right here.

Worst case: Siva commits his second foul 90 seconds into the round-of-32 game against Colorado State, slapping a dribbler 80 feet from the basket, just because he can. He charges twice in the first two minutes of the second half and then fouls out, scoreless, with eight minutes remaining. Smith goes haywire in his absence, forcing one kamikaze drive after another into the Rams' stout interior defense, shooting 5-for-20 for the game. Still, the Cardinals have a chance to win late when Smith fires a pass to wide open Chane Behanan beneath the basket. He fumbles it out of bounds and Louisville is stunned in Rupp Arena. Impromptu Big Blue street party erupts a few blocks away on Kentucky's campus. Entire starting five goes pro. Pitino, snubbed for the Hall of Fame, abruptly retires. John Calipari lands every remaining unsigned McDonald's All-American.

The words "vivid" and "imagination" made constant appearances on Pat's progress reports growing up.

Probably as many times as the words "achievement does not reflect apparent potential" and "pants-wearing needs work" appeared on mine.

The CCBM is just rubbing it in at this point. 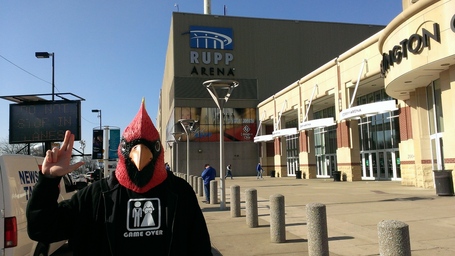 A look at how a rule change resulted in Louisville getting a much tougher draw than they would have in years past.

Peyton Siva is one of Scout's ten players to watch in the tournament.

And finally, we didn't have a post up about it today, but Louisville will head into the NCAA Tournament ranked No. 2 in both polls. The Cards received 20 first-place votes from the AP, and one from the coaches.