Macklin Perellis just turned one and doesn't know anything other than Big East championships. That's why he's got that casual lean rocking in his game chair. I'd kill for that peace of mind...and to be able to pull of those shorts.

An update on some notable statistics heading into tonight...

--Russ Smith needs to make just two more free-throws to break the school's single season record of 177 makes set in 1967-68 by Wes Unseld. His 176 makes from the charity stripe are still 43 behind national leader MoMo Jones from Iona.

With our powers combined...

Notre Dame has been to the Big East Tournament semifinals in each of the past three years, but still have never played in the championship game. Their run has been ended by Louisville the past two years, which, apparently, has only made the Fighting Irish that much hungrier for another shot.

The Irish found themselves in a five-overtime game against Louisville earlier in the season, so it's fitting this match-up has happened in the Big East Tournament. This is the third straight Notre Dame-Louisville semi-final match-up. The Irish have never made the title game.

"I would have been really upset if Louisville lost," Notre Dame senior Jack Cooley said. "I would have texted [Louisville guard] Peyton [Siva] and been pissed."

Congratulations on not being really upset, Jack. I'm happy for you.

I love this tidbit from the same story linked in the last blurb.

Villanova turned the ball over 18 times in the first half and Louisville finished the game with 58 deflections, a total that would count as a good month for most teams. Louisville sophomore Chane Behanan credited the success to the Cardinals' "Hey drill," a defensive drill when Louisville players get up into offensive players and yell, "HEY, HEY, HEY, HEY." It's likely a bit more complicated than that, but that's how Behanan explained it.

It's nice to see that my dating technique has finally made its way to the basketball court. 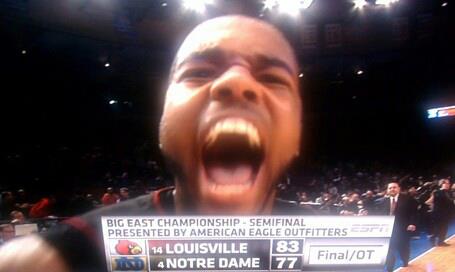 VUHoops.com reviews what went wrong for the Wildcats against Louisville last night.

So creepy and yet so awesome. 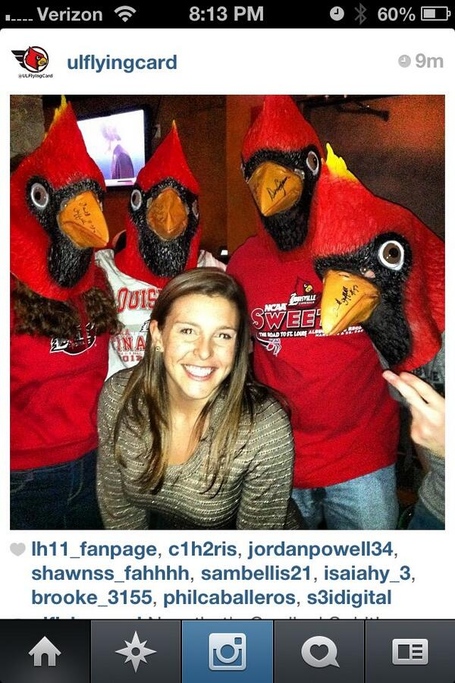 Coincidentally, So Creepy and Yet so Awesome is also the title of the upcoming Card Chronicle Bird Mask biopic.

Jay Wright on Louisville: "This team could win the national championship."

I love your suits.

Eric Crawford has the full quote:

A photograph from Chane Behanan's Instagram account is headlining a CBS news story. Of course it is.

Along the same lines, the new Pope is the only thing in the world bigger (figuratively) than Wayne Blackshear right now.

Mike Brey has encouraged him to not pass up semi-contested looks, and Connaughton has responded in a big way. The Cards will have to know where he is on the court at all times.

Also, talented freshman Cameron Biedscheid will be back in uniform. He was suspended for the game in the Yum Center after getting into a fight in the Irish's win over St. John's.

For the 11th straight year, Louisville is ESPN's top market for college basketball.

Louisville Takes Top Spot… Again
For the 11th consecutive year, Louisville was the highest-rated metered market for ESPN’s regular-season telecasts, averaging a 4.5 rating. Greensboro finished in second place for the second straight year with a 3.1 rating. In addition:

This was also the most-watched college basketball season ever for ESPN, which is something given the number of vocal critics the sport has faced over the past six months or so.

I appreciate him being a Cards fan and all, but JR Smith's new R&B song might be the worst thing ever.

Notre Dame site One Foot Down takes a look at tonight's showdown.

Notre Dame now plays Louisville for the third straight season in the Big East tournament semi-finals (Tonight, 9 ET, ESPN). I've said it before, but the Irish still owe them for two years ago. If you remember, the Irish - at the time a top five team in the nation - had as much as a 16 point lead in the second half that the Cardinals erased en route to a double overtime victory. Notre Dame gets a second chance at MSG redemption, following a laugher in last year's tournament, with each team playing very well so far in their combined 3 wins in the tournament.

As much as the Irish seem to be clicking after last night's impressive victory, Louisville may very well be the hottest team in the country, winning 11 of their last 12 games dating back to January. That one loss was to Notre Dame in the 5 OT thriller, but the miraculousness of that comeback does not exactly instill confidence that the Irish can beat them again, especially after last weekend's loss at the Yum Exclamation Point Center.

Throw all that out, though. This is the Big East tournament, and stranger things have happened in the Garden over the years. This will be one of these two team's final Big East game, so let's hope the Irish surprise everyone and send Louisville home early this time. If they play like they did last night, this is a very real possibility. 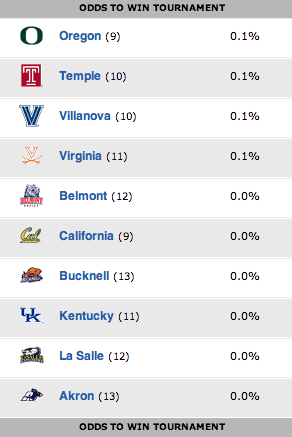 The more I think about it, the more I think that tonight's Big East Tournament semifinals (outside of not including UConn) are pretty perfect. You've got the best rivalry in the conference and probably the two names that are more synonymous with it than any other, and then you have the two teams that have probably played the most exciting collection of games during the new era.

It's going to be a special night in the Garden.

I get a lot of dog pics during Big East Tournament week...like, A LOT of dog pics...but this is one of the best I've seen in a while. 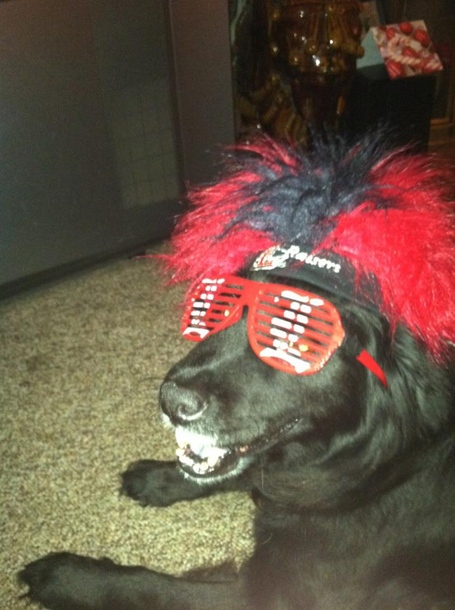