Share All sharing options for: Louisville Basketball And The Big East Tournament

Until then, here are some notable facts and figures to chew on.

--Louisville will be making its eighth appearance in the Big East Tournament, an event in which it owns a 10-5 all-time record. The cards have won two of the last four titles, and been to the championship game in three of the past four years. Overall, Louisville has won nine of its last 11 games in the event.

--U of L has the most victories in the Big East Tournament over the last four years, posting a 9-2 record (.818) with two titles (2009, 2012) over that stretch. The Cardinals have four more tournament wins than the next closest participant in this year's event. 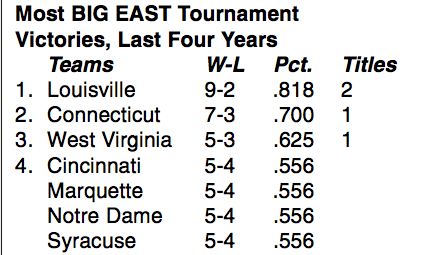 --Louisville has an all-time 27-26 record in Madison Square Garden and the Cards have won five straight there, seven of their last eight and 12 of their last 17 games there. U of L won the 1956 NIT Championship in the Garden, the 2009 and 2012 Big East Championships, and the 1971 Holiday Festival.