Share All sharing options for: Russ Smith The Front-Runner For One Player Of The Year Award

Though his national Player of the Year campaign has fallen off a bit over the course of the last month, Russ Smith is still the MVP choice of one college hoops expert.

Statistical guru Ken Pomeroy still has Russ on top of his kPOY standings, just ahead of Indiana's Cody Zeller and Michigan's Trey Burke. 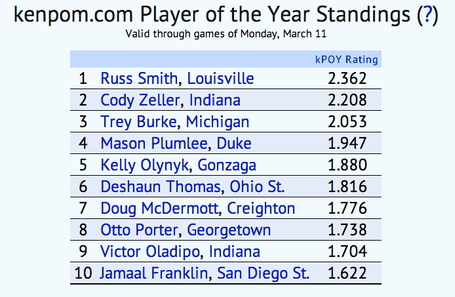 The distinction grabbed the attention of Sports Illustrated's Luke Winn, who believes Smith is deserving of more national love than he's getting right now.

The Forgotten Man in Player of the Year debates is Russ Smith, whose candidacy may have been derailed by the many crimes against sane basketball he committed during Louisville's five-overtime loss to Notre Dame on Feb. 9. But due to his super-high-usage, moderately efficient offensive profile and vital role in the nation's best defense, Smith is No. 1 in Ken Pomeroy's kPOY formula, which should offer solace when someone else wins the Wooden and Naismith Awards.

There are only eight guys who can realistically be shortlisted for those honors, and although my mind changes about this on an hourly basis, here's how I ranked them as of 5 p.m. Tuesday:

Smith was named first team All-Big East on Monday. Just like we all predicted.