"I don't think I could have choreographed a better night."

Those were Rick Pitino's first words after Saturday's Senior Day romp over Notre Dame, in which the Cards wrapped up a share of the final Big East regular season championship. I don't think anyone reading this would disagree.

Saturday's game was pretty much the antithesis of Louisville's loss to the Fighting Irish earlier in the year, a game where the Cards seemed to have victory well in hand almost a dozen times before ultimately falling in five overtimes. It was a positive night for the obvious reasons - U of L clinched a share of the Big East title, put itself in a position to earn a No. 1 seed, and the senior duo of Peyton Siva and Gorgui Dieng both played extremely well - but more importantly, it was the type of dominating effort over a good team that you expect to see from a national championship calibre squad at this point in the season. I know I wasn't the only one thinking it.

This was the final line of the opening act to the four week stretch we've all been waiting for since last March 31, and I don't think it could have gone any more smoothly.

I feel like I'm stating the obvious here, but if thats's the Gorgui Dieng we're going to see for the next four weeks, then it's also going to be the last Gorgui Dieng we see in a Louisville uniform. Gorgs looked like a pro on Saturday, and I don't think anything else needs to be said.

I think a lot of people brushed aside Rick Pitino's comment about Peyton Siva "playing up to the level of the moment" after his forgettable performance against Syracuse, but on Saturday he definitely looked an awfully lot like the guy we saw inside Madison Square Garden 12 months ago...except he shot the ball even better.

While I think the "this team will go as far as Peyton Siva can carry it" stance is an inaccurate one, I don't think there's any question that the senior co-captain and floor general has to be very good for the Cards to have a shot at cutting down the nets in Atlanta. He was very good on Saturday.

The Siva family and their leis will be one of the lasting images of this era of Louisville basketball, and one of the more memorable Senior Day moments any of us will experience. The shot on the big screen of Peyton talking with leis up to his chin and then cutting to Pitino smiling while wearing three leis of his own was priceless. 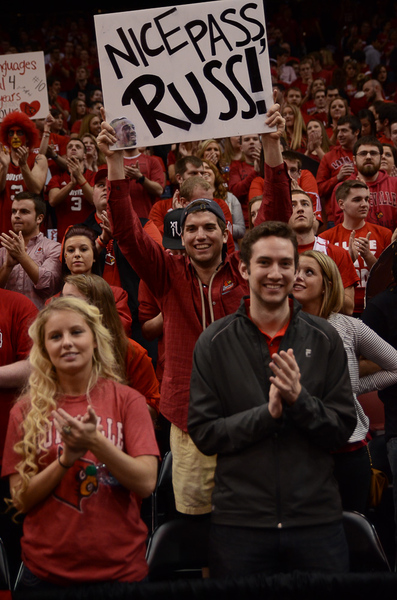 There was no part of me that was surprised to see any of Luke Hancock's first three shots go down. Remember that against Cincinnati his only miss was about 3/4 of the way down. The man is absolutely locked in right now, which couldn't be a bigger positive heading into March. I would say let's make sure to keep him coming off the bench, but Bench Wayne has been almost as hot since the start of February. So weird.

Even though it was meaningless by that point, Luke did revert to the old not following through from from the beginning of the season on his last attempt. Hopefully it was just because the game was already well in hand. I don't want to see the old Luke squirt shot ever again. Really need to think of a better name for that.

I don't know if it's possible for it to happen before the end of this season, but Wayne Blackshear needs to find a way to absorb at least a quarter of Russ Smith's confidence. There were two occasions where he had the ball with absolutely no one near him, and he didn't even think about dribbling. On another possession, he went up strong for an offensive rebound and then shot a fadeaway air ball instead of attempting to score by going towards the basket.

Adjusting to Rick Pitino's style is difficult for guys who have always been stars and never really had to play system basketball, I get it. But someone needs to remind Wayne that he was a two-time Player of the Year in Illinois who averaged around 30.0 ppg for the better part of his high school career. That doesn't happen without some serious skill.

The only situations in which Wayne is confident offensively right now are when he has open three-pointers, and when he ball fakes to create an open midrange jump shot for himself. Outside of that, it seems like he's out there simply trying to not make a mistake. That mindset doesn't help us.

For Wayne Blackshear to help this team to a national title, he needs to start doing the little things to get himself into the flow. He's got to cut harder, he's got to get better at using screens, and he's got to get more active on the glass. Doing those things will create easy baskets and allow himself to get more confidence and more into the game. There's no question that he's capable, it just feels like there's one last mental barrier that needs to come down.

Before Saturday, introducing Wayne as the "fattest, sloppiest McDonald's All-American to ever play for the University of Louisville" was the coolest thing Kevin Ware had ever done.

That is no longer the case.

I can't get over how bad that call was.

Also, I'd almost be bothered by the "Kevin Shimmy" if it weren't for Verne Lundquist saying "a little saucy behavior from Kevin Ware." For whatever reason, that's enough to make me be 100% in favor of it.

I will be Kevin Shimmying my ass off for the rest of the month.

I'm the biggest Logan Baumann fan you know. Light Slime is not getting nearly enough credit for his tremendous end of the bench work and unbridled timeout enthusiasm. Kid's at midcourt giving high-fives before I even realize there's been a stoppage in play.

Not sure anyone's seen a worse five-minute stretch than the one for Tim Henderson that included him nearly shooting a three-pointer behind the backboard and then slipping on a towel when running to check back into the game a few minutes later.

I think he was just trying to make the seniors look even better. The consummate team player.

No one has ever been happier to be wearing a candy lei. 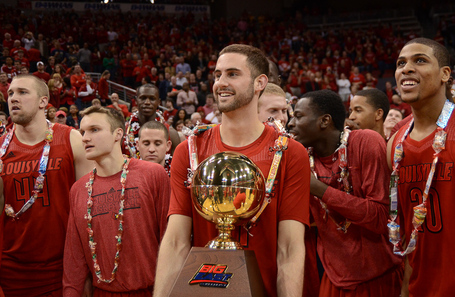 Another year without being in the general vicinity of a t-shirt or mini-ball. Sunrise, ball-less-let.

No idea what that even means, I've been up for a long time.

We give officials grief all the time when we lose games, but we won this one by 16 and I'm still going to mention how horribly officiated it was. Those guys were atrocious on both ends of the floor. 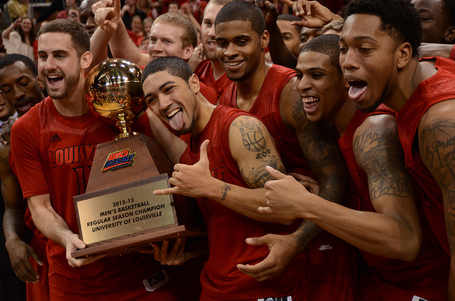 Not sure when the "Skinny Jeans Mangok" era began, but I'm not sure I'm a fan.

If the girl who was sitting behind me at the Joyce Center last month is reading this...heh.

If there was one negative aspect to this game it was that I thought Chane Behanan played very poorly. It wasn't that he was missing easy put-backs or making silly decisions, it was that he was consistently out of place or outworked, which is even more disappointing at this point in the season.

Chane wants to be a pro, I think everyone knows that, but that's not going to happen without an increase in effort and focus starting Thursday night.

Not only did Rick Pitino get too choked up to tell his planned Peyton Siva story before the game, but the same thing happened when he started to talk about Siva during his postgame interview with Paul Rogers. There are a number of reasons why Pitino wants to win a championship at Louisville "badly," but the connection he has with guys on this team like Siva might be at the top of that list.