This Is The Notre Dame Preview

Share All sharing options for: This Is The Notre Dame Preview

Where: Purcell Pavilion (11, 733) at the Joyce Center; Notre Dame, Indiana

Radio: WKRD 790 AM, joined in progress on WHAS 840AM, with Paul Rogers (play-by-play) and Doug Ormay (analyst). Also available on SIRUS channel 91 and XM channel 191

Notre Dame's Last Game: Jack Cooley was limited to 10 points and Notre Dame shot just 35% from the field as the Irish fell 47-63 at Syracuse on Monday

U of L As ESPN College Gameday Participant: 4-2 overall

Notre Dame Last Year: Notre Dame finished the 2011-12 season with a 22-12 overall record, 13-5 in the Big East. The Irish promptly lost their first 2012 NCAA Tournament game to Xavier because of course they did. 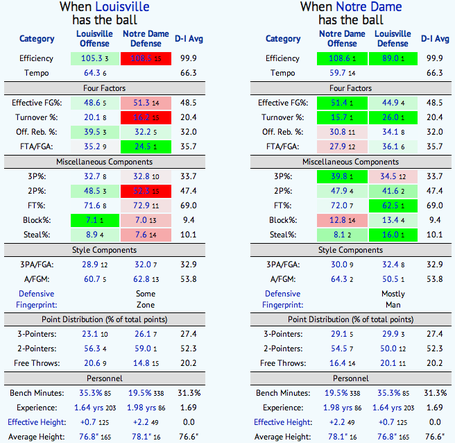 Don't Fear The D: Notre Dame's defense is the opposite of good. Like, bottom 10% of power conferences opposite of good. WORSE THAN DEPAUL OPPOSITE OF GOOD. And the majority of this defensive rep was built with the services of six-year vet Scott Martin, who was recently put down due to a severe case of the knee swells.

Pat & Cam: As in Connaughton and Biedscheid, the wings for Notre Dame who hit jump shots and look fancy doing so, but do not defend. This sets up well for a Make It Wayne™ game, assuming the late tip makes him hungry. #FeedWayne.

Fun Fact: Jack Cooley looks similar to former Notre Dame center Luke Harangody. This will be referenced in the game thread and by your friend who makes this joke a lot. Cooley is an elite rebounder and will finish with a double double vs. Louisville. That's not a joke, he's actually very consistent at doing this.

Atkins & Grant: Notre Dame's backcourt. Eric Atkins is on the shortlist for Most Improved Big East Player this season, while Jerian Grant is Horace Grant's nephew. One will have a good game, the other will struggle. This is not a prediction, it is fact. If they both play well, Notre Dame has a chance. But they won't.

Passing: Notre Dame rarely makes bad decisions with the basketball, as evidenced by their top-ranked assists-to-turnovers ratio. Though the Irish haven't faced the on-ball defense of a Russ Smith or Peyton Siva this season, Louisville can't rely solely on turnovers and transition buckets to defeat Notre Dame. Expect a healthy dose of Siva drive & dishing and for Gorgui to get his David Padgett on from the high post, to the tune of 4+ assists.

Defense: Prior to Scott Martin's knee swelling issues, Notre Dame ran a mix of 2-3 zone and man-to-man with some half court trap 2-3 zone. Expect a heavy rotation of 2-3 zone on Saturday night. The Irish want Louisville to shoot long threes and will hedge out on Siva pick-and-rolls like Villanova. Peyton hitting his first jumper will give him space to operate the offense, but the Cards have several other options. None of this should surprise you, but it's still relevant.

Analysis: Many of the recent Louisville-Notre Dame regular season games have involved an overtime period but that doesn't mean I'm gonna do what everyone thinks I'm gonna do and predict a close game. We can talk about Jack Cooley all we want too, but if Louisville shows up interested defensively--Troy Murphy, Austin Carr--whomever you want to put back there, has no shot. Wayne Blackshear, Russ Smith and Chane Behanan will all score in double digits and Gorgui will have 4 assists as the Cards roll by 10.

Medium Percentage Prediction: Wayne Blackshear hits a three in the first half