One of the biggest mysteries in college basketball since Louisville joined the Big East in 2005-06 has been the success Notre Dame has had inside the Joyce Center.

It's not an especially hostile environment for visiting teams to walk into, and though the Fighting Irish have consistently fielded solid teams over the past seven seasons, they haven't had one good enough to make it out of the first weekend of the NCAA Tournament. And yet Notre Dame has been almost unbeatable at home, a status best cemented by a 45-game home winning streak that lasted from 2006 to 2009.

Few teams know more about the wonders of the Joyce Center than Louisville. Though the Cardinals have had success against Notre Dame both at home and the Big East Tournament, the Fighting Irish remain the only team in the conference that U of L has yet to beat on the road since it joined the league.

A largely forgotten depressing night of Louisville basketball since so many U of L fans were just getting back from the Orange Bowl, and since the Cards ended up turning their season around.

Still, this was the low point of the season and one of the greatest periods of fan unrest during the Pitino era. The Cards had disappointingly wound up in the NIT the season before, and a similar fate seemed to be on the horizon after this pummeling in South Bend to open Big East play.

Russell Carter (remember him?) scored 19 points to lead Notre Dame. Luke Harangody chipped in 15 points and Rob Kurz added 10 points, nine rebounds and six assists for the Fighting Irish, who improved to 13-1. This was also the coming out party for then unheard of freshman point guard Tory Jackson, who came off the bench to score 14.

T-Will scored 18 points for Louisville, which trailed by as many as 23 points in the second half.

This game was also the same night as the Sugar Bowl between Notre Dame and LSU, which meant there were about 200 people in attendance. The football game did not go as well for the Fighting Irish.

You're probably a bit more familiar with this one.

It would be the last time the '08-'09 Cards would lose before the Elite Eight, and they definitely made it count. In hindsight, it was the perfect storm: Notre Dame needed a win to keep its NCAA Tournament hopes alive (they wound up in the NIT), I took Almost Dunking Marques Maybin off the game thread for the first time in weeks, and the team was pretty clearly looking ahead to DePaul Day that weekend. 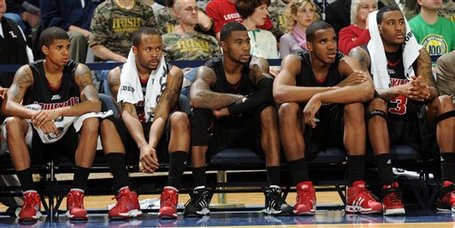 Louisville, which entered the game ranked No. 5 in the country, missed 14 of its first 15 shots and fell behind 17-4. It got worse. The Cards shot 23.3 percent in the first half and went into the locker room down 20. It still got worse. Notre Dame shot 53.3 percent from the game and wound up with the most lopsided Big East win in program history. It's still the worse Big East loss U of L has ever been handed.

Kyle Kuric's dunk has become the lasting image from this game, but Louisville fans forget just how much the final result from this one stung at the time.

This was the intro to our game wrap the next morning.

You can almost always accurately qualify the austerity of a loss by the time the morning after rolls around.

This one still stings.

Common thought says this shouldn't be as bad as it's been this year. Louisville lost to Drexel at home, handed Providence their first league win of the year, was drubbed by arch-rival Kentucky on New Year's Eve, and squandered opportunity after opportunity in a Big Monday loss at Georgetown last week.

This Notre Dame team is ranked 7th in the country and hasn't lost at home all year. Not that the latter fact is particularly unusual, the Fighting Irish rarely taste defeat at the Joyce Center, even in down years. Louisville knows this first-hand. The Cardinals have tasted crushing defeat twice in South Bend, including a 33-point drubbing in 2009 when they went on to win both the Big East regular season and tournament championship.

And yet half a day after the fact it still feels wrong to see a black "L" next to the game on the calendar. A few questionable calls, a pair of poorly executed last-minute possessions, a defeated overtime effort, and infuriatingly-biased announcing made the entire Wednesday night experience a painfully insuppressible memory.

Ah, yes, who could forget about the announcing team that night.

Bob Knight was nearly as bad as Phelps (the Jason Lezak of horrific commentating), but I'd prefer not to spend another two minutes writing about the announcing.

I'll just say that a man who is known every bit as much for his on-court intimidation antics as his coaching success calling a one-second glance "idiotic" is more than a touch ironic.

I'm going to be in South Bend at the same time Digger Phelps is for College GameDay. I'm just going to go ahead and apologize right now for any potential incident.

But the fact that Phelps and the ESPN crew will be in the building should only make Cardinal fans that much more uneasy about Saturday's game. Does Louisville have the better team? I don't think there's any question, but they've also been much better than the Irish in years past and made the trip home without a win.

This might be the last shot we get to cross the final name off our Big East road trip hit list. 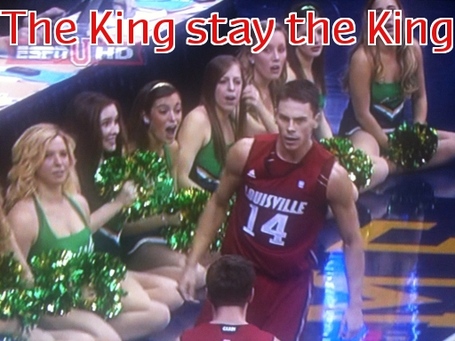 Let's get it done.