Share All sharing options for: The Night Big Blue Nation Went Too Far

When dealing with a rival fan base that is as consistently infuriating/confusing/depressing as Lexington Basketball Academy's, you have to pick and choose your battles. If you addressed BBN every time one of them or some of them did something that instinctively made you want to respond, you'd never get anything else accomplished.

All that being said, there are certain transgressions which simply cannot be brushed aside, for doing so both weakens and retards the progress of all mankind.

One such occurrence took place Tuesday night inside Rupp Arena. Now what you're about to see is going to give rise to a host of emotions that you may not have even known existed. I ask that you brace yourself as best you can... 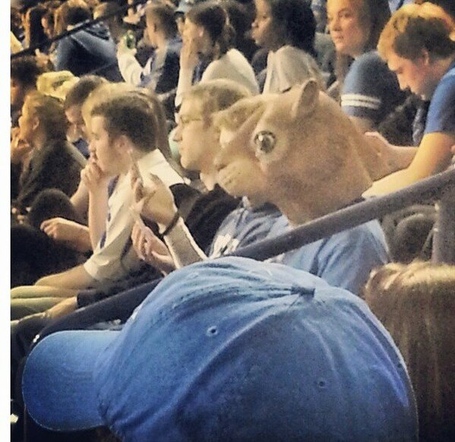 You can't just mascot mask swagger jack and expect nothing to happen in retaliation.

First of all, that piece of sh-t looks like a combination of a squirrel and one of those dancing hamsters from the Kia commercial, not a Wildcat. Second, is there a Kentucky sports website whose original logo came anywhere close to resembling that mask? I don't think so. So basically you're just looking like a dancing hamster/squirrel freakshow for no good reason.

A pox on you and a pox on anyone else even thinking about sporting this monstrosity either in public or in the comfort of their own home. You're not going to like what happens if this becomes a trend.

Thanks to Angel Russell for bringing this calamity to light