Andy Katz has an interesting and fairly lengthy Q&A with Rick Pitino up over on ESPN.com.

What will you miss most about the Big East?

What are you most looking forward to in the ACC?

Why do Peyton Siva and Russ Smith work so well together?

Pitino: I think Peyton Siva would work well with anybody. It doesn't matter who he's with. He doesn't care about the other person getting exposure. There are some people who are seniors would be upset by the attention someone younger was getting. Peyton doesn't let it bother him at all. He just does the best job for the team.

What type of player fits your style?

Pitino: Something that has been lacking the last couple of years, we've had the defensive intensity, but [have] not been able to shoot the basketball. And that's the last two years, more than any other time in 35 years in pro and college that I didn't have shooters. I made up my mind this time to go out and get guys who could shoot the basketball consistently. I think we've done that with our recruiting.

Jeff Goodman's latest rankings of the 101 best NBA draft prospects includes three Cardinals. Gorgui Dieng (37), Russ Smith (62) and Chane Behanan (95) all make the cut. I'm not sure that standing would be enough for any of the three to leave college after this season.

I'm really, really trying to not let myself get too excited, but it's not working.

I don't know if @cardchronicle will be able to handle it, but Russ Smith is on pace to break 1,000 points for his career on DePaul Day.

Louisville slides up four spots to No. 10 in Luke Winn's latest power rankings.

A chart in last week's Power Rankings showed that Cardinals guard/relentless basket-attacker Russ Smith was the national leader in transition possessions per 40 minutes. He's still No. 1 this season, but I wanted to take it a step further and find out where Smith ranks in the past four seasons, from which we have reliable Synergy Sports Technology data on power-conference players:

Smith comes in second only to The Jimmer, but the BYU star was far, far less efficient than Russdiculous is in the open court. It seems that in transition, Jimmer deserved the "reckless" label far more than Smith does.

(I computed Poss./40 from Synergy possession logs and playing-time data.)

Very interesting. But what effect does the Russhawk have on all of this?

Congratulations to Russ Smith, who has been honored with a 2013 Academic Momentum Award. The award was presented to him by something called the "Scholar Baller Program" because of course it was.

The Louisville soccer team is once again having to reload with transfers after losing another talented crop of players to the professional ranks. Ken Lolla announced Tuesday that six newcomers have enrolled at U of L for the spring semester. I have no doubt that the man will have these guys doing big things once the fall rolls around.

How hammered are Jody Demling and Howie Lindsey right now? 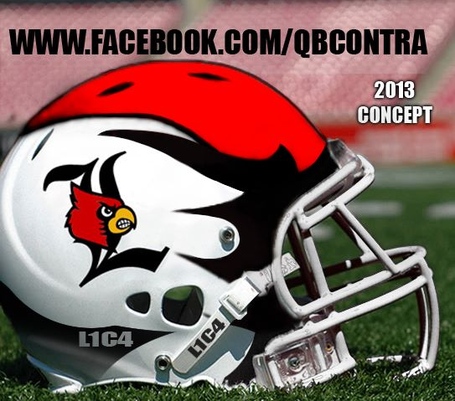 Those are always fun.

If you missed the comments section from yesterday's news and notes, you missed this pretty unreal story from freedom_cards:

I've met Gus Johnson and talked with him several times

He used to hang out and get drunk at this bar my soccer team drank at every game night. About a year and a half ago, I went up to him and introduced myself., said I was from Louisville and that we all really appreciated everything he had done for college basketball. Then he started asking about soccer, and told me his new boss at Fox had hinted that there might be some work for him in soccer, as Fox was really getting into it. I told him how awesome it would be. He was not sure at all about it. He never played it, and he didn't really watch it.

So we kept talking and I got one of my teammates (tottenham fan from London) to come over and start explaining some stuff to him, to kind of show him the passion they had. An hour later, we're still talking, he's still taking notes, writing shit down on bar napkins, just absorbing it all while clearly drunk. He buys me a shot and starts signing the napkins, and hands me one. On it, it says, "To Stephen, thanks for making me a million dollars tonight. Rise and fire, Gus Johnson." I cannot wait to hear him broadcast games on Fox, especially the World Cup. Imagine him announcing Landycakes' goal from WC 2010 vs. Algeria...

And here's a link to a photo of the autograph in question. Pretty outstanding story.

The final totals are rolling in for the St. Baldrick's Cancer research fundraiser, and Card Chronicle helped raise a little over $1,100. The winners of the tickets have been drawn and will be announced tomorrow. Thanks to all who helped out with this.

If you missed it last night, Chris Link synched up the famous Gus Johnson "here comes the pain" call from the '07 Stanford game with his recent alley-oop dunk.

And speaking of Earl, he's the subject of a nice feature piece from ESPN's Dave McMenamin today.

Alex Collins' mom running away with his national letter of intent because she doesn't want him to go to Arkansas is without question the best sports story of the day.

"Harry Douglas" was given as an answer to "Name a Famous Harry" today on Family Feud. Just throwing that out there. Shoutout to the Willinger family for making big plays.

I'm not entirely sure what this, other than the greatest wedding shower gift ever. 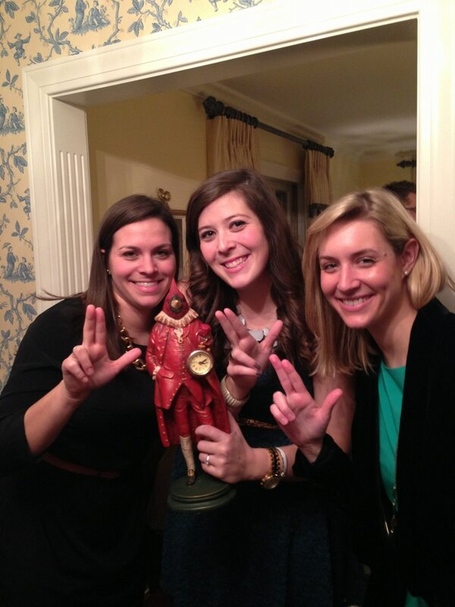 Also, I really, really want one. Believe it or not, "bird head classy" is a rare shopping genre.

Rutgers is hoping to put the brakes on a four-game slide, with three of the setbacks coming on the road. The Scarlet Knights are still a favorable 12-8 on the year, but their 3-6 league ledger has them just two games out of the Big East basement. The team is 8-3 at home this season, but has lost two of its last three at the RAC. This is the second straight game and sixth since the calendar turned to 2013 that RU has faced a ranked opponent, and its last such outing took place at Cincinnati last Wednesday and resulted in a 62-54 loss.

The Louisville Cardinal takes a look at the record number of U of L athletes on the honor roll.

The Scarlet Knights know that handling Louisville's pressure is a primary concern tonight at the RAC.

So, you're a point guard in the Big East. You're playing Louisville - owner of the most vicious press in college basketball - and your task is bringing the ball up the floor. Say you manage to break that press. Now you've got the back line to deal with, including one of the nation's better shot-blockers. You're panicking. Chances are you've run too many seconds off the shot clock. There's commotion, distraction.

What happens next you don't see coming.

The sneakiest part of the Louisville pressure defense isn't the full-court press, or even going up against 6-11 Gorgui Dieng, 6-8 Montrezl Harrell and 6-6 Chane Behanan once in the lane. It's the false sense of security that every point guard experiences after getting past midcourt with the ball. The Cardinals lull you, then they strike.

It's the secondary steal. And it's sure to make Rutgers' guards miserable tonight.

"It's Dieng in the back," sophomore guard Myles Mack said. "But then Russ Smith and Peyton Siva are trying to back-tap the ball from you. You've got to be as careful as possible when you're dribbling and dribbling through the press."

I love that lede. Really forced me to get into character for a second.