Rick Pitino was unavailable for Tuesday's pre-Rutgers press conference, so he sent the trio of Stephan Van Treese, Monrezl Harrell and assistant coach Kevin Keatts to handle the duty. 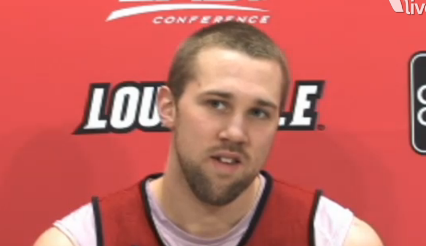 --Feels like he's able to lift the team when he comes into the game by hitting the glass and playing with energy. Sometimes we lack energy and he's able to help change that.

--Rebounding has definitely been stressed a lot in practice. Coach Pitino has been sending a lot of guys to the treadmill recently as punishment for not rebounding. I think he likes doing it.

--Everything was clicking for us against Marquette. It was like the Charleston and Missouri games.

--The environment at Rutgers is definitely hostile, but it's not the worst in the Big East. They have some good chants.

--Isn't surprised by his role. "Gorgui is the man." I just try to come in and be the enrgy guy.

--"I feel like we're doing the right things right now." We just have to keep listening to coach and buying into what he's saying and we're going to be fine.

--His parents didn't allow him to play football growing up.

--"In my head, when Russ has the ball, I'm preparing to rebound." When he does pass it, he's incredible. It makes our team that much better.

--Is kind of jealous of the other three guys have horses named after them. If he finds a big one then he'd like to be considered. 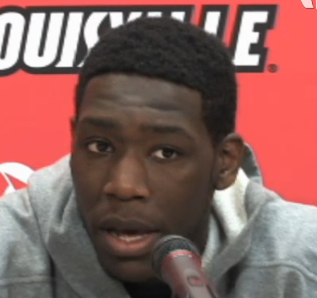 --The team is starting to play a lot better right now. Everyone is listening to coach more and paying the right amount of attention to the scout.

--During the losing streak, we weren't being aggressive enough with our press and weren't creating enough turnovers. Guys getting into foul trouble took away from our aggression on defense. We've really picked the energy back up and gotten back to the way we were playing at the beginning of the season.

--We probably underestimated some teams and they ended up beating us because they played harder than us.

--When I come into a game I try to play harder than anyone on the court.

--We're not underestimating anyone anymore. We know we have to pay attention to the scout and then go out and play hard.

--I try to listen to everything coach has to say and take advice from the older guys, they all try to help me out.

--I think I've gotten a lot better at rebounding outside of my area. When I first got here I could only rebound balls that I could reach for without moving.

--Having to learn to play both the four and the five has been the hardest part of adjusting to college basketball.

--He and Van Treese practice on the same team all week, so they kind of know where one another are on the floor when they're in the game together.

--He and Chane go really hard against each other in practice. Neither one wants to let the either get the better of him.

--"I play the game with a lot of emotion because this is what I love to do."

--Doesn't want Coach Pitino to name a racehorse after him. He's trying to stay away from that. 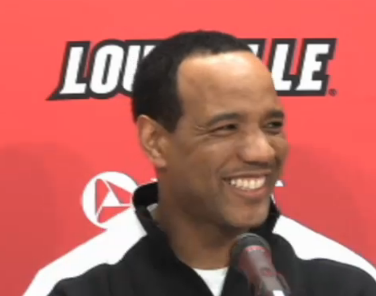 --Montrezl has come a long way. Coach has worked a lot with him in individuals. Everyone knew that he was an athlete coming in, but he's really becoming more of a complete player. He came in the game the other day and provided a lot of energy when we needed it. We consider him a starter at times.

--The Big East is still the most physical conference in the country. Thought Steven Adams of Pittsburgh got away with some pushes last week, but that's how this conference is.

--The thing about Rutgers that scares me is that they have three guys they can put on the floor at the same time that can really shoot the basketball. Their post guys are also really underrated. They're a team that can be really dangerous when they start well. Look at the Pitt game for example.

--The Pitino/Russ relationship is the most unique relationship I've ever seen. Rick treats Russ like he's Richard, like he's his son. He praises him when he needs to, but he'll also put him over his knee. Russ has a pretty good situation because coach is going to let him take some shots that nobody else would. There are probably only two or three coaches in America who could coach Russ.

--"When I first came here, I thought Russ Smith was one of the worst players I'd ever seen. A month later I thought he was one of the best players I'd ever seen." It was the same with Kareem (Richardson) when he got here. He was at practice and he was like, 'I hate watching this kid, he drives me crazy.' I used to think the same thing about Josh Howard, but when the lights come on, both of those guys know how to turn it on.

--Both Wayne Blackshear and Luke Hancock are doing a really good job at the three position for us. Combined, they're averaging about 12-14 points and six or seven rebounds a game. It was good to see Wayne come in after his shoulder injury and not show any side effects.

--Somebody told me the other day (about Trez), "all this kid does is dunk." I said, "that's pretty good." Right now he's a young guy playing his role on a team full of veterans. You're going to see him really develop in the future.