Dawit Armstrong apparently enjoys wearing this hat because his dad refers to him as "Santa Strong." I'd give every pair of pants I own to have "strong" somewhere in my last name.

The biggest news of the day generally gets delivered at the beginning, and this afternoon is no exception.

Russ Smith has a mohawk: 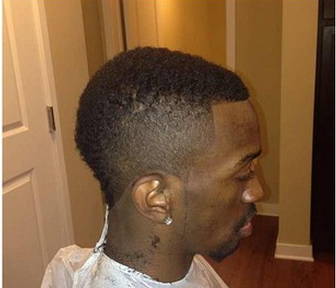 I'm generally anti-mohawk and think they've been kind of played out in recent years, but I'm completely behind this. I can't explain it, but it works...just like Russ.

"Do whatever you want and swag all day."

For the blissfully unaware, tomorrow is national signing day. Louisville currently has 16 commitments for its 2013 class, 13 of which are expected to sign tomorrow (three have already signed and are currently taking classes at U of L).

The biggest question mark heading into the day is four-star linebacker Jermaine Grace (Fla.), who is expected to choose between the Cards and Miami at 2 p.m. on ESPNU tomorrow. For what it's worth, six of Rivals.com's eight recruiting bros are predicting that Grace will wind up a Cardinal. The Miami Herald, conversely, says that The U is the front-runner to land his services.

Charlie Strong will be discussing the class during a 2 p.m. press conference.

The imaginary Card Chronicle signing day party will once again be held at Andy's TV on Shelbyville Rd. Imagine you're there with me and it will be so.

U of L has put in a significant amount of work recently trying to get South Florida commit Lamar Robbins - a four-star DB - to flip for the Cards. Though Dobbins' high school coach says his former player is still firm in his commitment to USF, the young man himself doesn't sound so sure.

Even if you're not as enamored with My Morning Jacket as the rest of the world seems to be, you have to love Louisville native Jim James' description of his city in this NYT feature piece.

THE MUSICIAN JIM JAMES lives in Louisville, Ky., a city that he says defies expectations.

Today is the last day you can donate/enter to win our St. Baldrick's Cancer research ticket contest. The winners will be drawn and announced tomorrow.

Shoni Schimmel has been named the Big East Player of the Week following her career-high 38-point effort against South Florida.

In case you missed it, Earl Clark made SportsCenter's top play on Sunday night with this finish of an alley-oop pass from Kobe Bryant.

Clark, who is an unrestricted free agent after this season, has already said that he "really wants to stay" with the Lakers.

According to an exclusive report from Sports Illustrated, Fox Sports is grooming Gus Johnson to the be the voice of the 2018 World Cup.

This might be the biggest play the "make soccer happen in America" movement has ever made. Gus is basically the Luke Skywalker of American soccer: If he can't make it happen, it's not going to happen.

Marquette tries to get at least 50 "paint touches" per game. Here's a detailed look at how they fared in that regard in Sunday's loss to Louisville.

Pat Forde forecasts that Louisville will emerge as the best team in the Big East by the end of this month.

Louisville (13) will have emerged from the scrum as the best of the Big East. Heading into Monday night, nine teams were within two games of first place in the loss column. Although four the Cardinals' six remaining February games are on the road, expect to see them on a roll heading to Syracuse on March 2. Louisville is the best defensive team in the league and perhaps the nation; when its half-court offense is functioning even adequately (which is largely on the shoulders of point guard Peyton Siva, this is the team to beat in a very competitive league.

Believe it or not, we are just a couple of weeks away from the start of the 2013 Cardinal baseball season. Check out the team's schedule poster for this year. 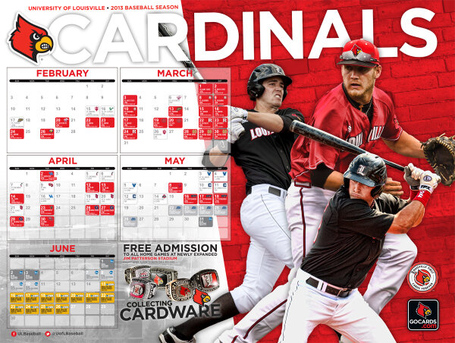 Despite some reports to the contrary on Monday, ESPN tweeted last night that Louisville is still set to replace Maryland in the Atlantic Division when it joins the ACC in 2014. Even though it appears to be the tougher of the two divisions (at least for the moment), it will be cool to play Florida State and Clemson every season.

A nice profile of U of L softball coach Sandy Pearsall from Brian Davis of the NFCA.

With all due respect to San Diego State's Jamaal Franklin, this is the college basketball dunk of the year so far.

I swear to God I will buy this shirt if somebody points me in the right direction. 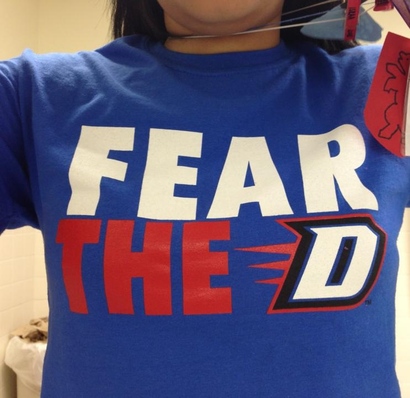 It's my favorite thing in the world right now.

In related news, check out VUHoops.com dropping some knowledge on where the "Blue Demons" nickname came from.

DID You Know... In 1900, when the first athletic team to represent DePaul University was organized, the monogram "D" was selected for the uniforms. This originated the nickname "D-men" which evolved into "Demons." The blue, which combines with Demons, signifies loyalty and was chosen in 1901 by a vote of the student body.

The "DePaul D-Men" would have been the greatest gift the world had ever given me. Thanks, evolution.

Also, we all know what the blue stands for, and it isn't loyalty.

Health bros and broettes: Is there an energy drink/supplement/anything that works without the risk of serious side effects? I made it through last February and March riding hard on coffee and five hour energy drinks, but the recent reports about the latter have me rethinking that route this go-round. Any help would be appreciated. I'm really tired right now.

There was no shortage of witty one-liners floating around on Sunday night, but this was the tweet of the Super Bowl.

The event has never been kind to poor Joe.

An interesting(?) Trez mention in this story about Al Sharpton having a hard time pronouncing names.

No offense is intended here, but Sharpton is a member of a culture that has an abiding fondness for unusual names, often spelled in a manner that defies the conventions of English phonographemics. Witness Montrezl Harrell, a power forward for the Louisville Cardinals, the "z" in whose name is silent, or former New York Giant/Philadelphia Eagle Sinorice ("sih-NOR-uhs") Moss.

How floored would that guy be if he found out we have a Senorise ("sih-NOR-uhs") too?

Five-star 2014 forward Trey Lyles made a surprise visit to U of L on Sunday, and apparently it went pretty well (subscription).

The Marquette Tribune says that Louisville/Notre Dame is the Big East game of the week.

Game of the Week

The Cardinals are rallying from a three-game losing streak that knocked them from the top spot in the nation. With a 70-51 home win over No. 25 Marquette Sunday and a matchup with three-win Rutgers earlier in the week, Saturday's contest in South Bend could be a shot at further redemption for the Cardinals. Meanwhile, at 6-5 after a loss against Syracuse, Notre Dame can greatly add to its conference stock with a win.

I'll be there, and I'm excited about it.

And finally, for those who have been asking, the Russ shirt is now available over at the Strait Pinkie store. 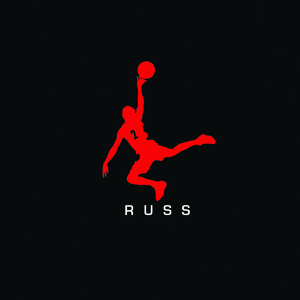 They also have a pretty solid Gorgui lion chasing shirt. 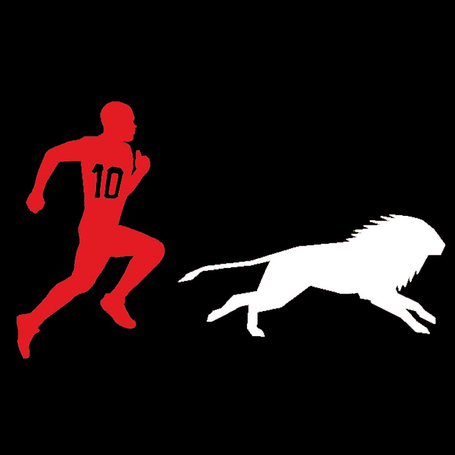 You can save five bucks and get two of these shirts for $25 by going over to the store and using the promo code "CHRONICLE" when you check out.