Well, this is happening. 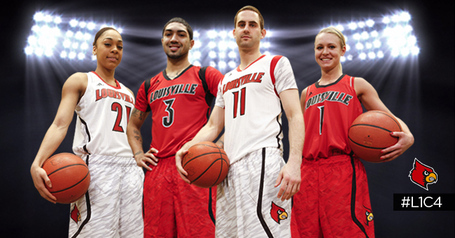 Here's a portion of the release from adidas:

adidas unveiled on Thursday the new eye-catching adizero uniform system for the University of Louisville men's and women's basketball programs.

The Cardinals' men's and women's teams will suit up in the adizero uniform systems beginning with their respective BIG EAST Tournaments. The women's tournament runs from March 8-12 in Hartford, Conn., while the men will play from March 12-16 in New York City.

The uniforms feature adidas' most advanced uniform technologies, designed to make an impact on the court, and a limited-edition camouflage print. The Cardinal men were selected as one of three programs to wear the new short-sleeved technology.

"The adizero uniform system gives players the leading performance technology with a distinctive on-court style," said Chris McGuire, adidas Director of Sports Marketing. "These uniforms celebrate the excitement of the game, letting players stand out during college basketball's biggest moments. Louisville will wear the most innovative basketball uniforms and footwear to help them elevate their game during the most important time of the year."

Designed for a bold on-court look and engineered to enhance player performance by improving fit, comfort and mobility, the adizero short sleeve uniform system is made from 60 percent recycled materials and features FORMOTION technology for comfort and maximum mobility during shooting and dribbling. FORMOTION also helps decrease friction between the jersey and skin to optimize natural movement. Jersey armhole insets with 360-degree stretch fabric promote free range of motion for the arms and shoulders.

The uniforms feature adidas' quick drying Revolution 30 technology, found in current NBA uniforms and ClimaCool zones, which move heat and moisture away from the body to keep the jersey light and dry during heavy sweating. The super-lightweight woven short is designed for improved breathability and a closer, more comfortable fit with compression base layers.

"We are proud to be the only university with top-15 men's and women's basketball programs both sporting these innovative uniforms in the coming weeks," associate athletic director for external relations Brent Seebohm said. "I'm especially pleased we will wear our true Cardinal colors upon thorough review with adidas, while extending the new impact camo apparel to retailers like Cardinal Authentic."

And a look at all the new adidas uniforms for this postseason: 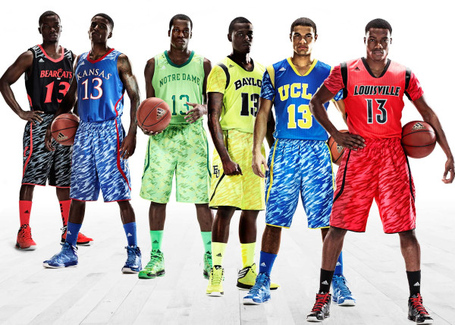 I think this puts an insane amount of pressure on Mick Cronin and Cincinnati because you don't want to be wearing those bad boys in the NIT.

Overall, it's not quite as bad as I think a lot of us were expecting, but it's definitely not great. Like I said earlier tough, if we win big in these things, then suddenly they're the coolest uniforms ever.