A most sincere and dramatic tip of the cap to this tiny hero holding it down in Mt. Sterling.

You can cast your Wooden Award vote for THE Russ Smith right here. An activity we all thought we'd be partaking in three years ago.

Also, be sure to keep voting for Peyton Siva for the Senior Class Award.

The Cards check in at No. 9 in the latest power rankings from ESPN, which is already completely in the DePaul Day spirit.

The Cardinals haven't beaten anyone impressive, but how they've won has been, topping both Seton Hall and DePaul by 18. Louisville's defense seems to have regained its early-season form. Since the OT loss to Notre Dame, the Cards have allowed an average 53 points per game.

Well all right. Maybe there's more to you guys than I thought.

Did you know that DePaul is the most sexually unhealthy university in America?

The hater of the day award (new thing...not really) goes to CBS. First, Parrish and Goodman still have Louisville all the way down at No. 13 in their latest top 25, and then Jerry Palm has the Cards as a four seed in his mock bracket.

Guys have been spending too much time in the dorm rooms at DePaul. Am I right? Did you get that? It's a reference...to that....to that thing from earlier.....it's funny because it's sexual and embarrassing.

There is nothing better than growing up a Louisville basketball fan. /p>

If you showed up to the Luke Bryan concert last weekend then you're a traitor. Simple as that. The coals haven't come close to cooling in our raging public feud.

Out of sheer spite, I'm going to write a country song about Jordan Bond that sets the record for time spent at No. 1. Working title is "This Bond Don't Break." Suffice it to say grass cutting, pickup trucks and hooded warm-ups all make an appearance.

As Eric Crawford points out, Chane Behanan is nearing the U of L record for dunks in a single season. Behanan currently has 44, which puts him 15 behind the record set by Dr. Dunkenstein himself.

Sooo DePaul fans chose to use an interesting taunt during their loss to Connecticut on Saturday.

I mean, yeah, one game in the Garden is better than no games in the Garden, but really DePaul? Taunting a program that won a national title two years ago about its postseason ban when your own program hasn't been to a postseason tournament in nine years (not a ban-related hiatus) seems a bit poorly thought out.

Also poorly thought out? Getting Gonorrhea.

The Louisville women's team toughed out a 55-49 win over Villanova on Sunday despite being without a handful of key player for all or part of the game.

The Louisville baseball team, which swept a three-game set with Akron over the weekend, remains at No. 4 in this week's Baseball America Top 25.

The Cards' homestand continues on Tuesday afternoon at 3 against Morehead State. Show up and get a free schedule key chain. Then stay and watch free baseball. Don't just take the key chain and bounce, that alone isn't worth the effort. 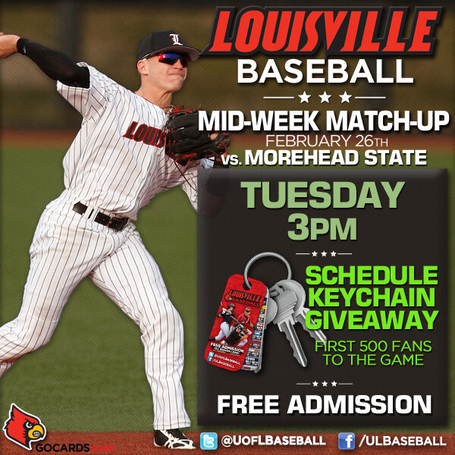 Andrea Adelson looks at what

Terrence Williams has been receiving mostly positive reviews in Boston so far.

I wouldn't say I wake up expecting to see an email titled "Chron'd the Rachel Maddow Show," but when I do, I roll with it. 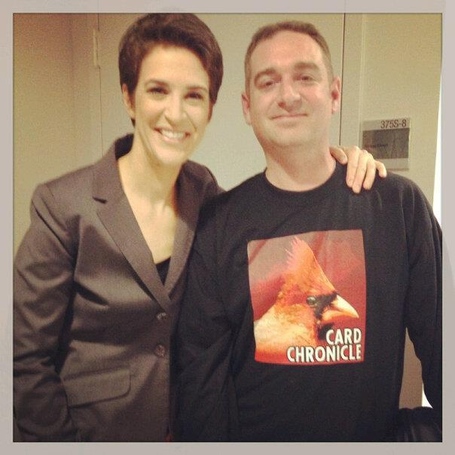 I'm dying for someone to Chron Chuck Todd. Dying.

If you guys were looking for supplies to celebrate this week's festivities, then the Party City on Westport Rd. is NOT the place to start. 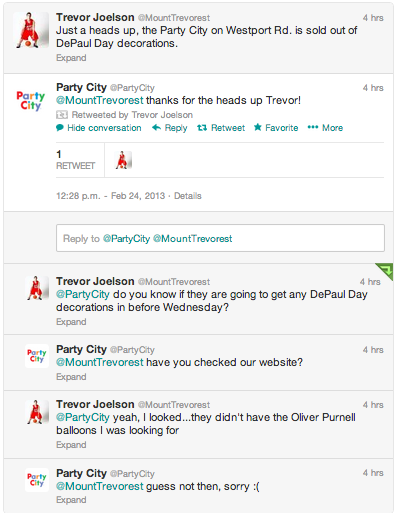 Must be a religious thing.

A good story from ESPN on the Rick Pitino stable and early Kentucky Derby hopeful Goldencents.

The consumate professional that he is, Adam Lefkoe bet folks on Twitter that he could work any reference they gave him into his post-Oscars sports segment last night. I bet him he couldn't get Kevin, Screech's robot from the early years of "Saved by the Bell in there," and he proved me wrong.

Am I a little upset that "Kevin the Robot from Saved by the Bell" didn't make a full appearance? Of course. But the Kevin the Robot live TV mentions market is so frail these days that beggars can't really afford to be choosers.

Congrats to U of L commit Quentin Snider, who has been named the Seventh Region Player of the Year. Despite being easily the most highly-regarded player in the state for 2014, Snider is probably the 35th or 36th choice to win Mr. Basketball next season due to his college choice.

Snider and his Ballard squad are currently taking on Seneca in the quarterfinals of the 7th Region tournament.

Speaking of 2014 commits picking up honors, Shaqquan Aaron has been named first team All-Area by The Seattle Times.

Kyle Kuric in Spain reminding everyone that his life is still better than ours. 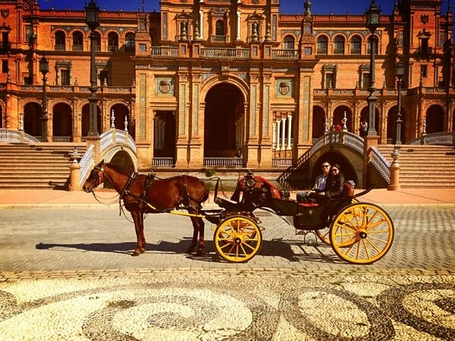 U of L softballer Caralisa Connell has been named Big East Pitcher of the Week after going 4-0 in the circle last week. The Cards, who are now 12-2, will face national powers Texas and LSU, among others, in this week's Citrus Classic.

No one has any idea who the second best team in the Big East will be next season.

The league will begin (actually, continue) its extreme transformation this summer when it officially welcomes Central Florida, Houston, Memphis and SMU while saying goodbye to Pittsburgh and Syracuse. We know that Louisville is the class of the league, as the Cardinals could be a preseason Top 10 team with Teddy Bridgewater under center. But who is the second-best team in the league? Willie Taggart and South Florida? Kyle Flood and Rutgers? Perhaps one of the new members? UCF returns 3,000-yard passer Blake Bortles, running back Storm Johnson and a solid defensive line, while Houston returns 14 starters. Memphis is led by young head coach Justin Fuente, but the Tigers just don't have the depth. And SMU loses many of its best players. The best bet for most intriguing newcomer seems to be UCF.

And finally, an interesting tilt between Syracuse and Marquette tonight at 7 on ESPN. The teams are the two that are tied with Louisville for second place in the Big East, which means a lot of you will be wondering who we should pull for. The short answer is: there's not really any way to know.

If we're looking to secure a double bye, then Syracuse is probably the team to root for since Louisville has already beaten Marquette (fifth-place Notre Dame, on the other hand, would own the head-to-head tiebreaker with the Cards). If we're talking about winning a share of the Big East title (or the whole thing), Marquette might be the better pick since they would appear to be the weaker team. Of course, U of L does play the Orange again and therefore can hand them league loss No. 5 themselves. Also, the Orange might be feeling a bit better about themselves on Saturday if they're coming off of a big win.

Again, there's no way to really know. My advice is to get into the spirit of the holiday week and just watch casually. And, for the love of God, do not be afraid to enjoy a Monday cocktail or five.