You don't want to get carried away by a pair of performances against the worst teams in the league, but it certainly appears as if Rick Pitino has his Cardinals about where he'd like them to be at this point in the season. We'll know for sure when the Cards tackle that tough three-game stretch to end the regular season.

But first, of course, we must DePaul Day. I plan on hitting a quick nine-hour nap with hired hands fanning me today in order to get into the spirit. It's like putting up lights.

Just a day after Pitino told reporters "you wouldn't believe it, but he's a really good jump shooter" about Gorgui Dieng, The Gorgster responded by burying seven jumpers and finishing 10-of-11 from the field. Gorgui shot the ball well consistently at the beginning of the season, but hadn't been able to find the range since returning from his wrist injury. His shot was usually too flat and more often than not found the front of the rim. That wasn't the case on Saturday.

People have sort of overlooked how well Gorgui has passed the ball this season, especially against zones. Check the tape against Notre Dame and Syracuse for evidence. If he suddenly starts hitting 10-16 foot jumpers with regularity, then it's going to create that much more space for the Cards to do damage in the halfcourt. This is a really encouraging development.

It's kind of scary right now just how much Wayne Blackshear and Luke Hancock hate starting. Both are playing their best basketball of the season when they come off the bench right now, but not only are they not playing well when they start, they're not producing at all.

But seriously, we need to get the one who starts playing better. But double seriously, the Rowengartner Sprain is real.

Russ Smith didn't attempt a field goal in this game until the 11-minute mark of the first half. That is a fact. He scored 19 points, but also continued to get his teammates involved more and finished tied for the team-high with five assists.

A very large part of me thinks Russ added the "fade to the left free-throw" to his arsenal this season just to expand on his Russdiculous persona. There's just no other explanation for it. Did he suddenly start practicing shooting free-throws where he faded slightly to the left and realize that he liked it? It's so bizarre, and yet he has the second best percentage from the stripe on the team and buried all 10 of his freebies on Saturday.

The best part about Russ' free-throw performance was Bob Wenzel's diatribe regarding the importance of balance at the stripe. He praised Gorgui, who promptly missed two in a row, and then had to watch as Russ barely touched iron time-after-time while almost falling over.

He took two bad shots, but other than that, Peyton Siva was once again terrific.I think Pitino's right about Peyton stepping up when the games are the most important, but I also think his improved play is the product of having a better feel for his teammates and having his own role cemented.

It's the end of February, which means the potential of averaging 20 points or shooting 60 percent from three is out the window. The best thing that can happen for any individual on this team, including Peyton, is for this team to win big, and he knows that as well as anyone.

The more the season goes on, the less pressure I think senior captains feel. It's one of the biggest reasons we're seeing Peyton letting the game come to him and playing like the guy who owned New York a little less than 12 months ago.

Our defense is really good. I know it, you know it, the world knows it, but I feel like I'm hurting its feelings if I don't at least mention it. There would be a possession every now and then where Seton Hall's guards looked like they just wanted to quit. Enough was enough and they needed at least a 30-second reprieve. That's what we do, and I love it.

I wouldn't say this if the game had ever been in doubt, but I was happy to see Aaron Cosby have a good performance playing in front of friends and family back home. The ex-Manual and J'Town standout hit 3-of-5 from beyond the arc and finished with a team-high 17 points.

I thought it was interesting to see Montrezl Harrell attempting jump shots without hesitation on multiple occasions yesterday. My guess is that improving his shot was one of the "two things" the coaching staff gave him to work on, and either he worked really hard at it on practice and was looking to show off, or he took that advice to mean start shooting more in games. Either way, let's hope he's getting all of that out of his system before the postseason rolls around, because Trez 15-footers generally equate to wasted possessions.

U of L held Seton Hall star Fuquan Edwin to 8-of-25 from the floor in two games this season. That's good.

Another handful of missed bunnies from Chane, but this time the power dribble can't be faulted. There were multiple times when Behanan didn't realize how lightly guarded he was and fell away from the basket when he didn't have to. Aside from that, I thought he played really well yet again. If he makes a few lay-ups then it's the 12 and 8 day it should have been.

Weekends with Wenzel would be the worst Tuesdays with Morrie knockoff ever.

I said this on Twitter, but Wenzel giving Gorgui the "Foreign Attraction" award in his awful Big East Oscars bit felt just like when Kelly Kapoor won the "Spicy Curry" award at The Dundies.

Bob Wenzel being the Michael Scott of Big East basketball is about as accurate a comparison as you can make.

He had a couple of Kevdiculous turnovers, but Kevin Ware is slowly winning me over for the first time. I mean, I have always enjoyed the young man personally (only player with a registered Card Chronicle account), but I haven't been the biggest fan of his game. He's always been an asset on the defensive end because of his length, instincts and athleticism, but his liability on the other end of the floor has almost made playing him not worth it. That appears to be changing.

In addition to knocking down the occasional outside shot, Kevin is consistently beating defenders off the dribble and either getting to the rack or making the smart pass to an open teammate. We're finally seeing the evolution that was talked about so much during the summer.

I also LOVED seeing Kevin get a little bit of time at the three with Peyton and Russ in the game at the same time. Having multiple ballhandlers on the floor with him allows Kevin's strengths (ballhandling isn't one) to shine a little bit brighter, and he also has more than enough length and athleticism to defend and rebound from the wing.

Peyton Siva talked a little bit about the three guards playing together after the game.

Are we ever going to get Slimed again? It's looking unlikely, which makes me sad. Don't expect Light Slime to pout, though. The man is still killing the end of the bench game right now.

A quick glance at the standings after yesterday's action: 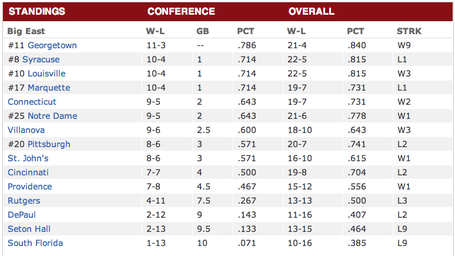 With Georgetown having already beaten us, Syracuse and Marquette, any chance we have on earning the No. 1 seed in the Big East Tournament is almost definitely contingent on the Hoyas dropping two of their last four games. All we can do is handle our own business.

DePaul Day, three huge games against tournament teams, the hunt for a Big East regular season title, the Big East Tournament and then a run at a national title.

I am in, and will be in, a perpetual state of arousal.