Earl Clark And T-Will Square Off, Francisco Garcia Gets Traded

Share All sharing options for: Earl Clark And T-Will Square Off, Francisco Garcia Gets Traded

Wednesday night was an interesting one for former Cardinals in the NBA.

First, Terrence Williams made his debut as a Boston Celtic, and did so against Earl Clark and the Lakers. 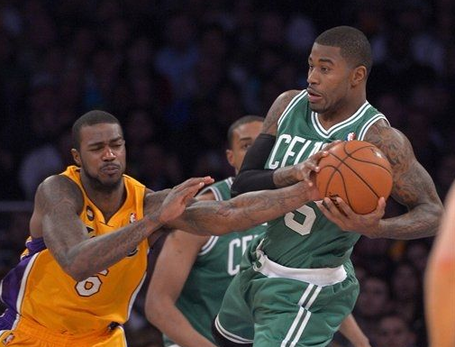 T-Will entered the game late in the third quarter and played the rest of the way. He finished with two rebounds, two assists, two turnovers and two points, burying the only shot he took. Earl, for his part, produced yet another double-double, finishing with 14 points and 16 boards. The Lakers won, 113-99.

As for the other Cardinal currently in the league, Francisco Garcia found out on Wednesday night that his lengthy tenure in Sacramento was coming to a close. Garcia, along with Thomas Robinson and Tyler Honeycutt, was traded to Houston in exchange for Patrick Patterson, Cole Aldrich and Toney Douglas (the brother of former Cardinal and current Falcon Harry Douglas).