The CCBM isn't recommended winter-wear for serious climbing in Colorado, but here he is (along with Scott Lange) at the top of Pike's Peak.

CBS says that seven teams in college basketball fit the statistical profile of a national champion. I probably wouldn't be linking this if Louisville wasn't one of them.

The last 12 champions have possessed these eight stats:

The other six teams that fit the mold: Indiana, Florida, Duke, Syracuse, Michigan and Kansas. 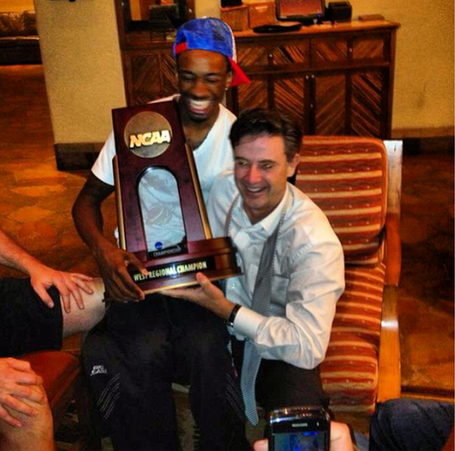 Trick question. Choosing one or the other kills an innocent, blind puppy somewhere. Why I would even pose the question and make such an occurrence even possible is for another post.

Bought one of these bad boys last night and it's the best move I've made in 2013 so far. Also, let the record show that I was paid on Tuesday to write a story about DePaul basketball that featured "penis-innuendo" in its permalink.

Some days it's all worth it.

Louisville sits at No. 7 in Scout's updated list of the best 2013 recruiting classes in the country.

Well then you're in luck!

Join Hall of Fame Coach Denny Crum, Louisville Legend Darrell Griffith, and the UofL Alumni Association for a Cardinal Pregame Party prior to the men's basketball game as UofL faces DePaul University at the Allstate Arena in Chicago, IL.

*Pregame party reservation does not guarantee reserved seating. Price includes appetizer buffet while supplies last. Cash bar ONLY.
**$30 roundtrip coach bus trip from Finley Dunne's Tavern to Allstate Arena includes seat reservation and beer and soft drinks.
***Game tickets can be picked up at the pregame party (if attending) or they will be left at Allstate Arena will call window under your name.

Speaking of DePaul Day, kudos to the women's team on celebrating in style with both pink jerseys and an 81-55 win. 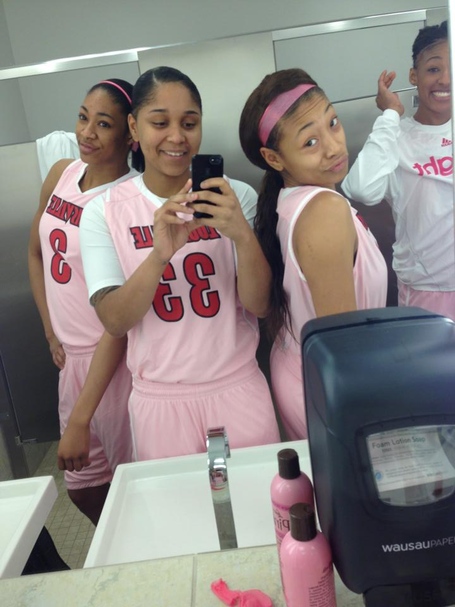 A pair of college youngsters recently asked me if my stance against belly flopping into baby pools extended to impromptu drunken snow angels in the winter. The answer is that it does not. I have nothing against collapsing into the snow on an early morning walk back to your place of residence and doing some arm and leg flapping to humor your friends.

What's the difference between the two? Well I don't think I really need to justify my stance here. I graduated from college and I'm not homeless. Point proven.

Eric Crawford with the latest on The Gorgster.

Dieng, of course, has his own way of looking at things. I asked him what he thought when Pitino made those comments. (And Pitino, for the record, noted that if Dieng isn't a sure first-round pick, he definitely should return). Dieng's response, as always, was thoughtful.

"I'm not worried about the NBA right now," Dieng said. ". . . I'm worried about the next game. When the season is over I'll sit down with coach and talk. But I consider myself that I still have a four-year scholarship, and I feel I am a student-athlete, so I'm not just trying to jump ahead of anything."

Terrence Williams is officially a Boston Celtic and will be wearing No. 55 when the C's face Earl Clark and the Lakers tonight.

Belated congrats to Card Chronicle's favorite softballer, Hannah Kiyohara on being named Big East Player of the Week. The ladies are off to an 8-2 start and will play their home opener Friday at 2:30 against Kent State.

The Louisville baseball team got its home season started in style with a 17-6 drubbing of Eastern Kentucky on Wednesday. Cole Sturgeon, Adam Engel, Sutton Whiting and Zach Lucas led the onslaught, combining to go 12-for-15 at the dish with seven runs scored and nine RBI.

The Teddy 4 Heisman movement makes its way to the John Lennon Wall in Prague. 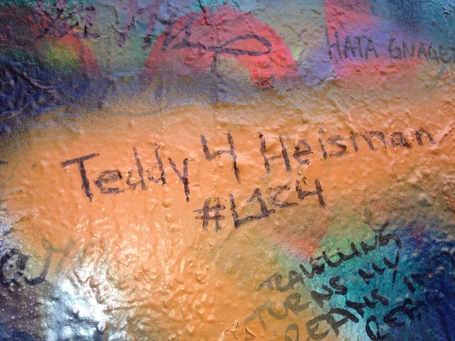 It was also in Tampa, which isn't as far, but is still cool. 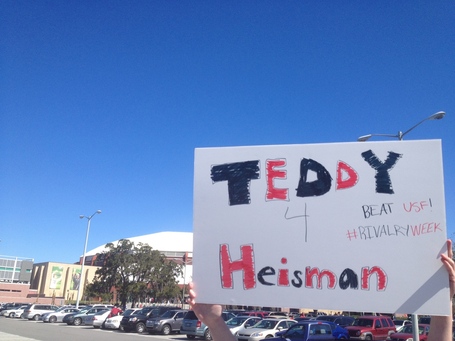 Man, I miss the unbridled intensity of Rivalry Week already.

Tennessee can breath easy because it didn't reel in Louisville coach Charlie Strong when it tried to last December. The Cardinals' coach actually agreed to take the UT job before backing out and staying at U of L. It turns out his top assistant Clint Hurtt is also one of the three ex-Hurricane coaches accused of lying. Hurtt is Strong's defensive line coach and recruiting coordinator. He has been hailed by recruiting services as one of the best closers in the business. If he can't convince the NCAA that he did not mislead its investigators, he'll likely be closing the book on his coaching career for a while.

No, they're way better off without him. The Sugar Bowl proved he could never hack it in that league.