Kentucky fans are outraged again, which could mean that John Calipari is being burned at the stake in the middle of Times Square or that a weekly publication in Bismark accidentally misspelled "Wildcats."

Tuesday's outrage stems from the following cartoon, which appeared in this morning's edition of The Courier-Journal. 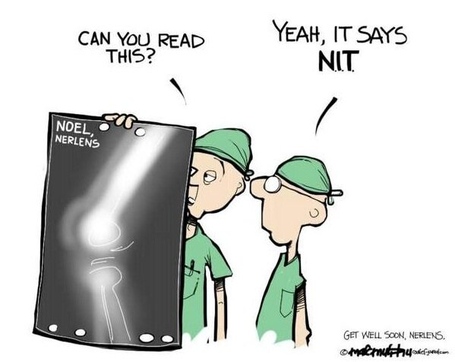 Anything that tackles a topic that involves a kid and a serious injury is going to be given an extra look, but I can't imagine being enraged by something like this if the tables were turned (a Preston Knowles ankle cartoon, maybe). Annoyed? Absolutely. Furious? Nah.

You know who has been talking about Kentucky probably heading to the NIT since Nerlens Noel's season ended last week? Everyone in this city. I don't get why making the same statement in an illustrated form is a genre of discourse more worthy of scorn than all the others.

Marc Murphy has taken shots at both Louisville and Kentucky in the past, a fact which likely accounts for the lessons learned that led to "Get well soon, Nerlens" being written there in the bottom right. Veteran move.

The cartoon isn't especially funny or clever - we already know that's not really the C-J's forte - but it's also not a malicious or even tasteless shot at Nerlens Noel or the Kentucky basketball program. Murphy simply wanted to tackle the topic that is still being talked about more than any other in the city of Louisville.

Not everything is worthy of a loud reaction.