Sunday's game felt a lot like the St. John's win in that every time you felt like getting overwhelmingly positive about the performance, the Cards would fall back into one of those two or three minute lulls that made you want to throw things. The difference between the two games is that the good stretches on Sunday were much better than the good stretches last Thursday. That's progress, and that's what you're looking for each time out once late February rolls around.

As much as we all hate having to go a work week without Louisville basketball, I think this is the perfect setup for the end of the season.

For probably the last time this season, the Cards are going to have a full week to work on things in practice. While they won't overlook Seton Hall, having a struggling opponent like the Pirates will afford them the chance to cover some things they probably wouldn't have otherwise. Then there's the three-game gauntlet of Syracuse, Cincinnati and Notre Dame that will serve as the best postseason prep we could ask for...and then it's time for the madness.

It's the final calm before the storm (or storms), folks.

Just got off the horn with the fine folks at Guinness, and they confirmed that Sunday's performance did shatter the previous record for most fat dunks in one game. Didn't want to write this post until I was sure.

But it wasn't just Wayne getting angry at the rim. In all, nine of Louisville's 22 made field goals were of the slam dunk variety. I'd have to imagine that is easily the highest percentage of the season.

Also, I'm becoming a huge fan of Wayne's signature "try and catch the ball with both hands after it comes out of the net" dunk. Man's an innovator.

At least the folks at ESPN were kind enough to begin their broadcast with what was essentially a, "heads up, we're going to make you angry today" message. 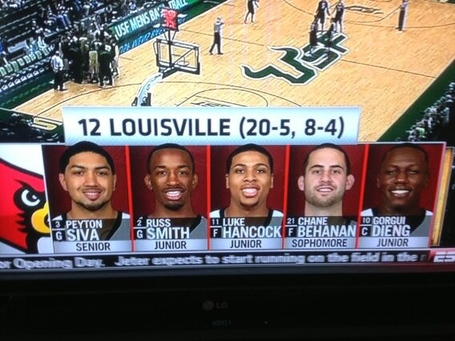 I hate having to wait.

I was pleased with Sunday's performance, but not quite as enamored with it as Rick Pitino was.

"The reason sometimes we're not a good shooting team is we haven't been a good passing team," Pitino said. "The reason Indiana and Gonzaga are so good offensively, it's not their shooting, it's their passing that makes them so good. We've struggled with that over the years. Tonight we didn't. We really, really worked the ball around and Russ was the catalyst for that. . . If this team passes it, if we pass the ball, we're pretty tough to beat because of how hard we play and how we play on the defensive end. The nights we've had trouble is the nights we didn't pass the ball and there was too much one-on-one."

Couldn't agree more with that...and it's a mark of approval that Rick cherishes. He's about to be inducted into the Naismith Hall of Fame, I got paid today to write about DePaul making shirts with penis innuendo on them. These are the types of working relationships that make programs successful.

I think the most positive thing about Russ' play since the Notre Dame game is that he's trying to do the right thing more. He made two really, really bad passes at the end of the first half that allowed USF to go into the break on a 5-0 run, but the decision to pass was the right one in both instances, he just didn't execute well.

I also miss the Russhawk.

People love to bitch about Luke Hancock remaining in the starting lineup, but the fact is that Wayne Blackshear has been about 50 times better coming off the bench since he returned from his most recent shoulder injury. He didn't shoot the ball well (0-for-4 from deep) on Sunday, but he was extremely active, which was especially encouraging to see after his shoulder scare against St. John's.

The combination of the ESPN picture and U of L's black jerseys made it hard to differentiate players on Sunday, and there were multiple times where Wayne was so aggressive on the glass that I mistook him for Chane. That's a major, major positive for this team going forward.

Also, his inability to draw a foul on drives to the basket continues to astound me. The one time he did earn a whistle was the one time over the past month where I didn't think it was deserved. He's got that Derrick Caracter Disease...in this regard only.

I hate to dog on him because he's played so well in recent weeks (POWER DRIBBLE IS DEAD), but Chane Behanan's inability to handle success really frightens me. When he made that breathtaking behind-the-back save/pass to Russ Smith late in the second half, my first instinct was to applaud and tweet about it, and my second was to wonder what questionable succeeding action it would lead to. Sure enough, three possessions later Chane made a simple move to the basket and then attempted to throw an alley-oop to himself off the backboard. It did not work.

We talk about this phenomenon with regards to Russ Smith all the time, but Chane's far less likely to convert on these low percentage plays in consecutive attempts, which makes his propensity for attempting them more troubling. When Behanan makes one of his crazy spin move turnaround jumpers, I get excited for about .01 seconds before hoping that when he tries and botches the same move the next time (because, now inevitably, there will be a next time) that it doesn't come at a particularly inopportune moment.

At some point between now and the end of the season Louisville's going to face another situation like the one against Notre Dame where Behanan is their biggest asset and their most easily accessible route to made baskets.

Put simply: Louisville needs this guy to step up big time over the next month. He's already started the process, but I think handling success is the next big step in the evolution of No. 21. 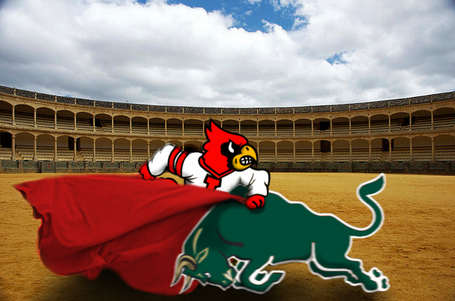 It's weird to say, but it seems like Gorgui is falling down a lot more now than he was before he suffered his wrist injury. He's been really strong on the glass on both ends of the floor (as his rebounding numbers indicate), but that toughness disappears when he gets the ball in the low post in U of L's halfcourt offense. Instead of going up strong at or around the basket, The Gorgster is settling for outside jump shots and then attempting these little hooks and fadeaways which result in him ending up on the ground.

Enjoyed the effort the "soon" image produced, but am open to game thread talisman suggestions going forward. It's crunch time, this is where you put egos aside and do whatever's best for the program.

There might not be a program less deserving (outside of DePaul) of being able to claim as intimidating a combination as "The Sun Dome" and "Rocky the Bull" than South Florida. How the program fails to recruit at an elite level with these types of benefits is beyond me.

Peyton Siva has figured out what he needs to do in order for his team to reach its ceiling, and he's quietly playing his best basketball of the year. Siva's role within the Louisville offense was unknown at the beginning of the season, and I think he tried to shoulder too much of the scoring load because that's what a lot of people thought he was going to have to do. Now that everyone has a better understanding of U of L's pieces (heh) and who can do what, Siva is really letting the game come to him.

Siva hasn't had less than four assists in a game since he dished out just two in the loss to Georgetown. He's also committed more than three fouls only once - when he fouled out of the five overtime loss to Notre Dame.

The 2012 postseason taught us that Louisville couldn't be at its best when its point guard wasn't. That's one of the things that hasn't changed over the past 12 months.

Not sure if he had a "talk to God" moment when he was in Rick Pitino's doghouse, but I'll eat whatever Kevin Ware's been eating over the past couple of weeks. He's gone from a guy whose only real benefit was his length on the defensive end to a legitimate asset in Louisville's halfcourt sets. Ware has that combination of size and athleticism that is so rare on this team, and if he can consistently make the right decisions when those advantages put him in a position to score or assist, then it's going to be hard to keep him off the court.

A lot of people were terrified when a football recruit signed with Louisville during this game, and understandably so. It was uncharted territory for this phenomenon, and I think we now know that one of two things is true:

1) A football recruit signing with Louisville has the reverse effect on the basketball team that a player committing does.

2) A football recruit committing or signing during an actual game has the reverse effect that a commitment or a signing simply around the time of a basketball game does.

There will be a book written about this one day.

With the new flagrant rules in college basketball this season, any incidental contact above the shoulders is supposed to be a flagrant one foul. An intentional act of the same variety is a flagrant two foul. We've all seen it enforced and explained dozens of times on TV by now.

Peyton Siva getting elbowed in the face and having to leave the game with a bloody lip: Not a flagrant foul of any sort...even after a review. Naturally.

I'm going to go ahead and say it: Light Slime is the best end of the bench guy we have had in years. His big play reactions, his excited runs onto the floor during momentum timeouts, his congratulatory high-fives; the kid is absolutely locked in right now.

Louisville is now 18-0 when leading at the half.

Rivalry Week dominance: check. My USF and St. John's buddies are going to have to hear about this for months.