Share All sharing options for: Teddy Bridgewater Receives Key To The City

Cardinal quarterback Teddy Bridgewater was honored at Friday night's Paul Hornung Award Banquet with the Howard Schnellenberger MVP Award, which is given each year to the most valuable player from the Louisville/Kentucky football game. 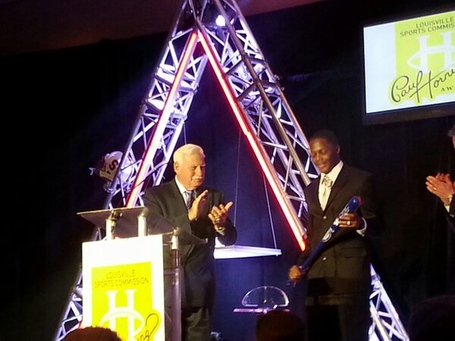 Bridgewater, sporting a (fresh) shorter haircut, was honored with a personalized Louisville Slugger bat, and was also given a key to the city by Louisville mayor Greg Fischer.

Despite not playing the final quarter and-a-half of the game, Bridgewater set a new U of L record for completion percentage by completing 19-of-21 passes for 232 yards as the Cards whipped their rivals from Lexington, 32-14.

Kid's going places. Feel free to stop by and hang out. You've got a key.