The biggest piece of news to come out in the wake of Louisville's 72-58 win over St. John's is Gorgui Dieng's postgame story about he and co-captains Peyton Siva and Luke Hancock not allowing the team to take any days off following its five overtime loss to Notre Dame.

The team was supposed to have two days off following the game (the NCAA requires at least one day a week without supervised team workouts), but the trio wasn't having it. Instead, they led the workouts for their respective positions themselves.

"We're not going to stop working," Dieng said. "This is about our season, about our team. We need to stick around and work out. We cannot lose anymore. That's enough."

Best human being on the planet.

Follow-up: Congrats to Gorgui on his career-high 17 rebounds. He'd tied his previous best (16) on two separate occasions this year and just couldn't quite get over the hump.

"I had two really well practices the last few days," Smith said after the game. "So I give credit to myself. I was really focused on coming out here and performing well."

Kid's definitely one of a kind. He also played a hell of a game.

Peyton Siva clarified Thursday night that this wasn't the first game he's worn contacts, but that this is the first year he's done so since arriving at U of L. Kind of disappointed. It would have been a nice little storyline if Siva continues to play as well as he did against the Johnnies.

I respected Chris Obepka as a tremendous shot blocker on Thursday afternoon. I loathe him as a Montrezl Harrell face-pusher on Friday afternoon. 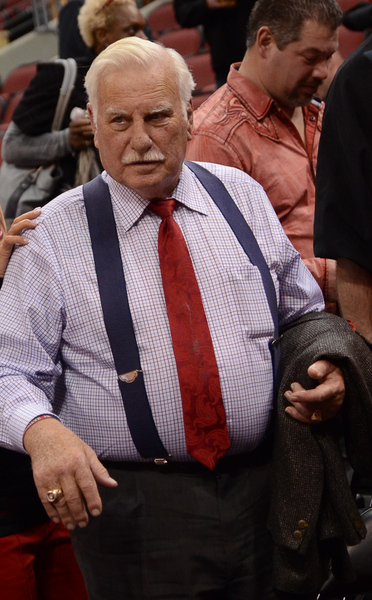 I want him at every home game ever.

Not sure if the issue is bad hands or them being ready to receive the pass, but our big guys simply have got to get better and catching the ball inside. We left about 10-14 easy points on the court simply because our forwards and centers dropped passes they should have easily reeled in. I get that Russ and Peyton sometimes make those wrap-around passes that make it hard to see the ball until it's in your chest, but we should be adjusted to that by now. Those easy baskets are ones a streaky shooting team can't afford to not collect when it's playing a quality opponent.

My Luke Hancock crazy lay-up confidence could not be higher. It's like throwing up a long jump ball to DeVante Parker at this point: I want at least one attempt per half.

Love this shot from Brandon of our guy's defensive focus. 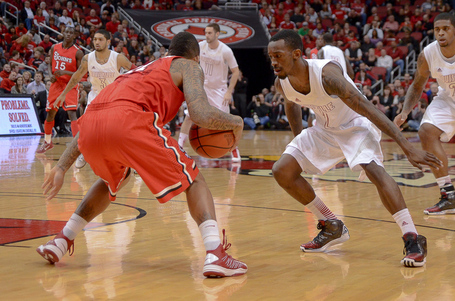 It's not until I talk to jealous fans of other teams that I realize how lucky we are to be able to follow a team that always gives such outstanding effort.

Couldn't be prouder of Chane Behanan's recent power dribble restraint. It's like a kid (or adult) giving up candy for Lent. Also, he's converting or getting to the free-throw line in a lot of situations that were turnovers or blocked shots two weeks ago.

Playing against St. John's, I would have said before that game that it'd be more likely we'd commit 28 fouls than eight. Credit to our guys.

My heart absolutely sunk when I saw the way Wayne Blackshear immediately grabbed his shoulder. I'm still a little worried about him, but his performance in the Harlem Shake video definitely did a lot to ease my fears.

Yet another sentence I never thought I'd be writing in some sort of serious capacity.

Congrats to Me'Angelo Harrison on cracking the 1,000-point mark. Also on making sure Phil Greene IV didn't take more shots than him, even on a night when he was feeling it.

Great photo from Pete Cautilli of Peyton Siva and his dad after the game.

Yes, it was a bit of an uneven performance against an overmatched team playing without its head coach, but I think the positives absolutely outweighed the negatives on Thursday. At the top of that list was U of L scoring 72 points, despite getting just 15 points off of turnovers. Takeaways typically account for just under 33 percent of the team's point total.

The guards were aggressive, but not reckless, nobody turned the ball over more than twice (the team had just 8 total turnovers), and the Cards notched a 14-point win on a night where they didn't have anyone shooting the ball especially well.

The task for this team is pretty clear from this point on: Take care of business and keep improving against South Florida and Seton Hall, see how much you've improved during the season-ending gauntlet that is Syracuse, Cincinnati and Notre Dame, try to win another Big East Tournament and then be playing your best basketball of the season when the big dance rolls around.

The real fun is just about to start.