Share All sharing options for: The Script Said Overtime

We were too obtuse to acknowledge it in the preview, but the Notre Dame script said overtime. It always does.

I don't know what we just watched but I'm certain it wasn't basketball. It reminded me of trying to play soccer against football players in college. Don't ever do this, by the way. Star-shaped pegs, square holes and all. You get it.

I think it's only fair to begin with what went wrong. And there were many things that went wrong: missing wide open jumpers, clanging free throws, fouling at the worst times, mismanaging the clock, over-dribbling, shooting game winners from thirty feet, refusing to use timeouts, and on and on and on.

Seriously? Louisville can't even get a shot off before the buzzer. My brain just folded over on itself.

I immediately regret thinking Russ was the better option than Siva in end-of-game situations. Don't feel bad about that guys, this one's on me.

Struggling for words. The effort was always there, but the execution was just, ugh. Look at the score and time left here and try not to punch a hole in your wall: 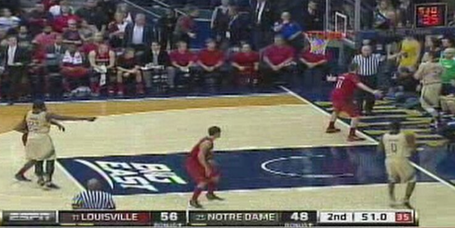 Louisville lost this one with defensive complacency and poor decision making as much as Jerian Grant and Garrick Sherman won it for Notre Dame with clutch shots and yeah, sometimes just being in the right place at the right time. It happens. Those 51 seconds though, they can haunt you.

More from Mike later after he's able to decompress what he just witnessed in person.