Braxton Smith gets it. I don't think anything else really needs to be said.

Last night on our radio show, Jody Demling said that Titus Teague was unlikely to be a member of the Louisville football team for the 2013 season.

If you see me lying face-down in a ditch at some point this weekend, don't try and help.

Louisville offensive coordinator Shawn Watson has found redemption during his stint with the Cards.

Not only did Bridgewater take the next step, but Watson was able to use the spread/West Coast concepts that have defined him throughout his career. One stat he takes particular pride in -- 11 players caught 10 or more passes this past season. Now the question you really want to ask: After what happened at Nebraska, did he feel he had to prove himself all over again?

The recent success drew head coaching opportunities, Watson confirmed without mentioning specific schools. Why did he stick around for at least another season?

"When I look at those opportunities, I do want to be a head coach. I do. That's something that's still in my goals professionally," Watson said. "But I want it to be the right situation. This is a great place. And I've got a special guy I'm coaching, and I'm coaching with a bunch of special people. There's a lot of chemistry here. We know we can get to where we want to go."

So in the span of about 48 hours, Louisville has seen a record high of 71-degrees, four confirmed tornadoes, a 40-degree overnight temperature drop, F'ING THUNDER SNOW, and now a wind chill of below zero. This city is definitely a woman, but I love her.

The ACC is still exploring the option of having its basketball tournament in New York, ESPN reports.

Because of the Atlantic Coast Conference's increased Northeastern footprint, the ACC is interested in holding a future men's basketball tournament in New York, an ACC school official told ESPN.

The deadline to bid for the 2016-21 ACC tournaments was in September and New York's Madison Square Garden and the Barclays Center in Brooklyn did not submit a bid.

However, because of the league's changing membership, the ACC is now considering other options for future tournament sites, the source said.

Graham Parker of Grantland has a really terrific (and informative) piece on former Cardinal and recent No. 1 draft pick Andrew Farrell. Even if soccer isn't your cup of tea, this a great read.

On a related note, the soccer world is getting pretty excited about Louisville's new stadium.

This is in my top five favorite bird mask picture ever, because he or she basically just ruined the entire picture. 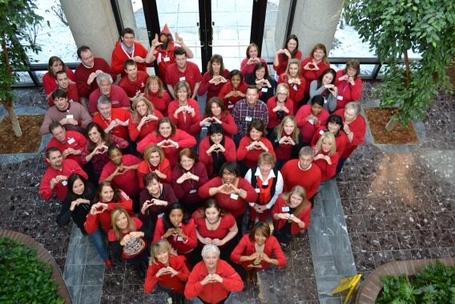 I highly recommend looking at the woman in the very front, and ten darting your gaze to the CCBM in the very back. It's a highly rewarding exercise.

The Sho netted a career-high 38 points in Louisville's win over South Florida on Wednesday. That performance helped her jump to No. 12 on U of L's all-time scoring list.

Over the weekend, Louisville-signee Terry Rozier showed why he has risen into five-star status across most ranking services.

On Saturday, Rozier scored 68 points in an overtime win for Oak Hill Academy, and then followed that up with 38 points and a game-winner the next day. It might have been the best weekend performance of the season by an elite player. Scout.com's Evan Daniels was in attendance, and he couldn't stop fawning over the outing.

"That was the highest scoring output I've seen since covering high school recruits and arguably the best individual performance I've seen in a game," Daniels told CBSSports.com. "I've seen Monta Ellis go for 50 and Austin Rivers drop 40 a couple of times, but Rozier was on a different level last weekend. It was the best performance I've seen. He was zoned in. His second half was incredible."

U of L writes about the upcoming St. Baldrick's event and mentions our ticket contest...which you still have time to enter.

Former Cardinal David Akers will be representing The Ville on Sunday when he kicks for San Francisco in the Super Bowl. The official 49ers site writes about how he's gearing up for the big day.

The Cincy Enquirer has a great story on Greg Scruggs' and his relationship with his high school football coach.

After exactly one high school game - his first football game ever - the Miami RedHawks offered Scruggs a scholarship. Scruggs wanted to accept; Specht said no, knowing there were more to come. "Coach, if I blow my knee, I'll never talk to you again," Scruggs said.

After his third game, Tennessee offered. Then his cell phone never stopped beeping, until he asked Specht to intervene. Scruggs signed with Louisville, to play with his best friend at St. X, Darius Ashley.

Scruggs started three-plus years for Louisville. He went from 215 pounds, to 295. At his pro day, he ran 40 yards in 4.68 seconds. The Seahawks picked him in the seventh round last April. By midway through this season, Scruggs was a fixture in Seattle's defensive line rotation. Not bad for a drummer.

Steve Specht doesn't take a lot of credit for Scruggs. "He had a good network at St. X," Specht says. He also had the structure of Boys Hope.

Scruggs says Specht isn't telling the truth. "If not for him, there would be no Greg Scruggs in the NFL,'' he says. "He was the driving force."

Coach helps kid, kid helps coach. This is how it's supposed to work.

Class of 2014 quarterback DeShaun Watson from Georgia states on Twitter that Louisville offered him a scholarship today. Watson is currently committed to Clemson.

The OC drinking game. Because it's Friday, it's my off night, and I can link whatever the hell I want.

Going to side with the folks voting "yep" in this argument.

Charlie Strong and Johnny Patrick spending some quality time together in New Orleans. 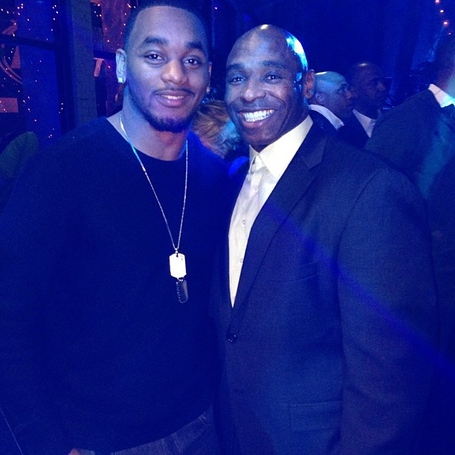 Jon Bois' description of the three worst Super Bowl parties you've ever been to will be the funniest and most disturbing thing you'll read all weekend.

The latest SB Nation Bracketology has the Cards as a three seed in the Midwest with Michigan (1) and Miami (2).

The Big East and the "Catholic 7" have a lot of items to hash out before their divorce is finalized.

Some highlights from Louisville's student-athlete talent show on Wednesday:

Congratulations to Peyton Siva, who has been named to the Capital One Academic All-District First Team for the second time.

The sports world's other Super Bowl this weekend is in Louisville.

For anyone making the trip to South Bend next Saturday, here's a potential method of transportation. 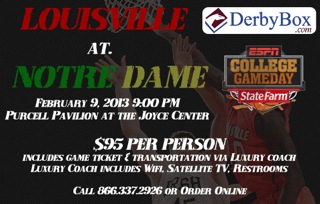 I'm not going to be on the bus, but I'll be up there all day. Looking forward to a good time.

One of the most underrated aspects of the Louisville football program's recent success has been the ability of Charlie Strong to retain his assistant coaches.

The stability has been remarkable, Marcus. Some of these assistants have gotten looks elsewhere. Offensive coordinator Shawn Watson did, but he decided to come back to Louisville. I asked in a recent phone interview why there has been so much stability at Louisville.

He said, "You know when you join something special. There's been a lot of people who've had opportunities to leave here but when you think about it, it's hard to leave. You don't want to leave this environment because you get this every so often in coaching. I've been doing it 30 years and it happens every once in a while where you get a group of guys on the same page, believe in the same things, support each other. There's no egos. It's about a team that wins. The fact that Charlie's the guy leading the program empowers all of us to do our job at a high level. It's easy to hold each other accountable to one another. It's a good deal."

I'm not educated enough on the matter to pen anything substantive on it, but it certainly appears as though the KFC Yum Center's financial situation is a complete mess.

Marquette has a very real shot to win the Big East's regular season title because of the relatively weak conference schedule it has remaining in front of it.

The good news for Marquette, however, is that two of its mirror opponents (South Florida and Seton Hall) are a combined 3-12, which helps give the Golden Eagles the fourth easiest schedule the rest of the way. Remaining opponents are a combined 40-42 (48.7 winning percentage). Only Connecticut (40.9 percent), Villanova (43.7 percent) and Cincinnati (44.4 percent) have easier roads.

For Louisville to have a legitimate shot at being the No. 1 seed in New York, it probably needs to win on Sunday.

On the final weekend before national signing day, linebacker Lyn Clark will be the only uncommitted prospect taking a visit to U of L.

And finally, probably the creepiest snowman ever created. 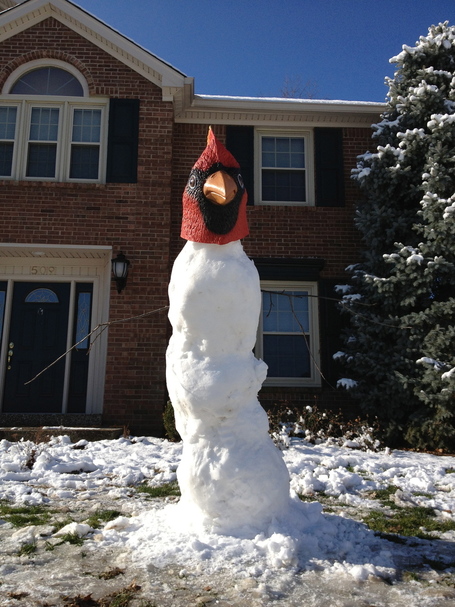