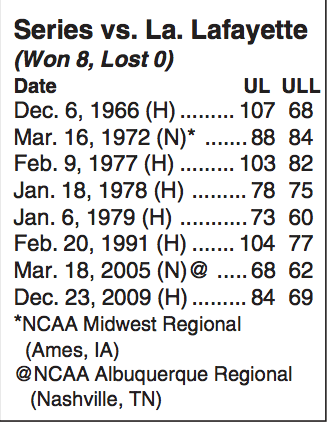 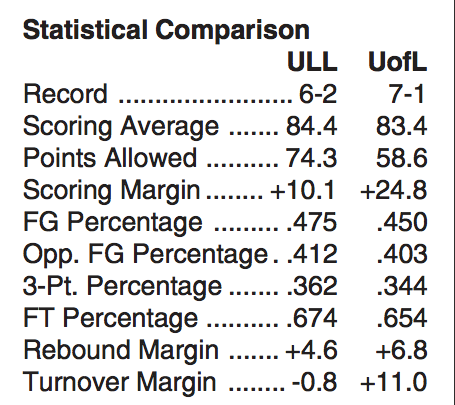 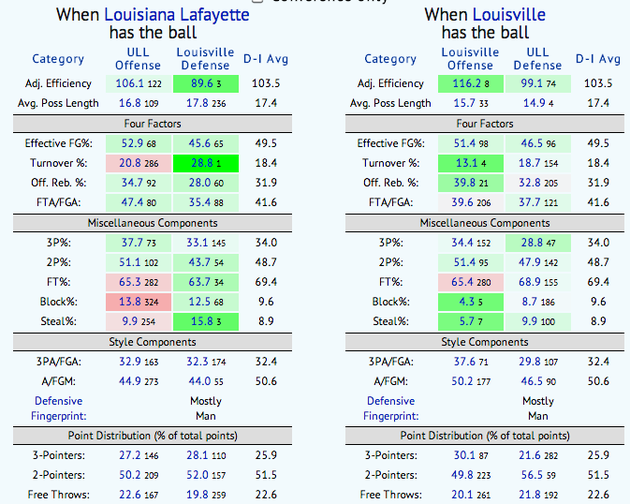 Entering the game at 6-2, Louisiana Lafayette will be just the third team ranked in Ken Pomeroy's top 100 that the Cardinals have faced this season. Sitting at No. 84, the Rajun Cajuns are currently regarded as the fourth-best opponent on Louisville's non-conference schedule.

After dropping back-to-back contests at Arkansas (76-63) and at No. 20 Baylor (87-68), Lafayette has reeled off four consecutive victories, including an 89-80 triumph at previously 6-1 Louisiana Tech on Wednesday. The win snapped the Bulldogs' 19-game home winning streak.

Nineteen NBA scouts will be in the building Saturday afternoon, and according to Rick Pitino, the two biggest reasons for that are Louisiana Lafayette stars Shawn Long (20.1 ppg, 11.6 rpg, 3.1 bpg) and Elfrid Payton (19.9 ppg, 6.3 rpg, 5.0 apg, 2.5 spg). Despite returning all five starters, including Long and Payton (a preseason Wooden Award candidate), the Rajun Cajuns were picked to finish just fourth in the Sun Belt Conference before the season.

--Louisville leads the nation in turnover margin (+11.0) and is eighth in fewest turnovers per game (9.3). U of L has committed 10 or fewer turnovers in eight of its last 11 games dating back to last year.

--Russ Smith needs two steals to reach 200 in his career. He is currently 56 steals behind the career record of 254 set by Peyton Siva.

--With a 6-2 record heading into the weekend, the Cajuns are off to their best start since going 7-2 to open the 1995-96 season. Last year, the Cajuns did not win their sixth game until Dec. 29th and ultimately finished just 13-20.

--Luke Hancock is now just 10 points away from eclipsing the 1,000-point mark for his college career.

--Remember when we almost lost to these guys in the first round of the tournament in '05? Remember how good Tiras Wade was? That was really scary.

--Louisiana Lafayette ranks 13th in the country in points per game (87.5).

--Louisiana Lafayette has lost 12 straight games against ranked opponents, a streak which dates back to a victory over Mississippi State in November of 2002.