The final whistle had barely blown tonight before news broke that Louisville had accepted a bid to play in the Russell Athletic Bowl.

It's safe to say the folks at U of L were prepared for the news. 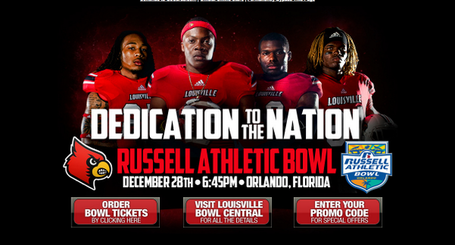 Though we don't yet know who Louisville will be facing, we do know that the Cardinals will be squaring off against ACC opponent on Dec. 28 inside the Florida Citrus Bowl Stadium in Orlando. The game will kickoff at 6:45 p.m., which should be about 30 minutes after the end of the Louisville/Kentucky basketball game, which is set to tip-off inside Rupp Arena at 4 p.m.

I think we had all better start preparing our minds and our bodies for Cardmageddon right away, for it comes a mere 22 days from now.