Share All sharing options for: Louisville Rolls Over UMKC, 90-62

Using a variety of on-court combinations, including a starting lineup without Russ Smith, Louisville coasted past Missouri Kansas City, 90-62 Wednesday night at the KFC Yum Center.

Though he came off the bench for the first time in his senior season, Smith was still the primary contributor to U of L's win. He handed out a career-high 11 assists to go with 10 points, six rebounds and three steals. He also spent some quality time with U of L President James Ramsey in the middle of a play. 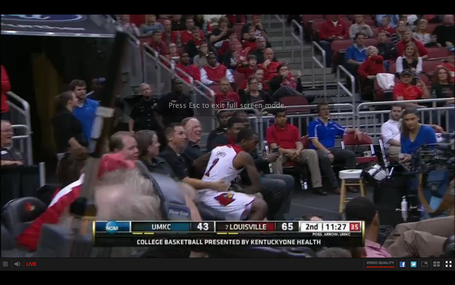 UMKC - which, for those wondering, is not a very good basketball team - shot 46 percent from the field, but was done in by 20 turnovers and some porous defense.

David "Levitch You a Merry Christmas" scored three points. Outside of that, I'm not sure we got a whole lot out of this one.