Louisville plays Kareem's Kangaroos in basketball tonight, and the Sporting News is all over it.

I think we can all agree that USA Today has pulled a lot of shameful ish over the last several months, but this? This is crossing the line, running back over it, mocking it to its face and then setting it on fire.

This is why they call him "Russdiculous."

With the Oklahoma City Thunder down two in overtime and about a second and a half on the clock, Russell Westbrook hit a fall-away three-pointer to beat the Golden State Warriors 113-112 Friday night. The play was the result of two previous misses with time running down.

This is like if Chris Jones had a huge game tonight, and I started the game wrap post with "this is why they call him Dr. J." You can't just steal a well-established nickname belonging to player A and then lazily claim that the all-encompassing "they" has been referring to player B by the same nickname for an extended period of time.

I don't even know what to say to USA Today anymore. The worst frat house in America deserves a poll more than you do. And no, I didn't mean "pole," I meant a group of young men with a small amount of social skills and even less of an interest in sports still deserves to assemble the votes of a group of basketball and football coaches more than you guys do. 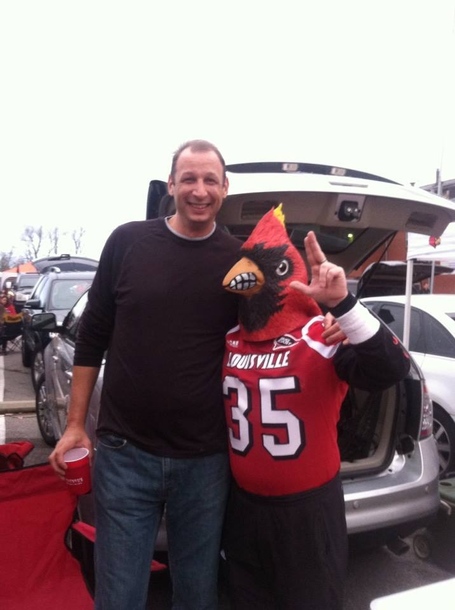 Video highlights of the U of L women's team's rout of Missouri State are available here.

I always miss Villen most around the holidays. And by always I mean this year because this is the first year he hasn't made videos.

The U of L football team has failed to cover the spread in six of its last seven games, and other gambling notes.

Via Mark Blankenbaker, check out the beautiful new addition to the front of the Yum Center: 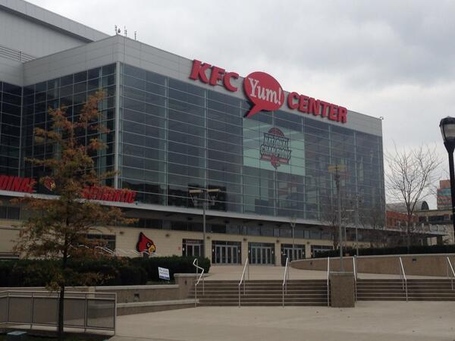 Despite playing on zero days rest, U of L signee Quentin Snider turned in his second big performance in as many nights, dropping 28 points in Ballard's rout of Seneca. Snider has now scored a total of 60 points in the first two games of his senior season.

With Louisville heading to the ACC after this season, the Cincinnati Enquirer says Thursday's game is about perception for the Bearcats.

Reality: UC has beaten Louisville four of the last five times they've played. The chink was an overtime loss last year, when Butch Jones iced the field goal kicker who proceeded to miss the field goal, then make the next one.

Perception: The Atlantic Coast Conference, Louisville's home beginning next fall, is too good for the likes of UC.

Reality: For the past seven years, only Virginia Tech has finished with a higher BCS standing.

We won't even mention that UC won or tied for four of the final five Big East titles, or that the Bearcats are one of four FBS programs with at least 10 wins in five of the last six years (Alabama, Oklahoma and Oregon being the others), or that UC's last three head coaches left here to work at Michigan State, Notre Dame and Tennessee.

"It's a challenge to get recognized by the people that are supposedly the upper-echelon of teams," Tuberville said. "Right now there are probably only 15 to 18 teams that have a chance to win a national championship. Number one, because of national recognition, and number two, because of the availability of talent.

"We want to jump into that market. You do that by recruiting and winning games, but you also need to be noticed while doing it. When you get out on the big stage -- and to us, Thursday is a big stage -- you have to perform. Whether you win or not, you need to make people realize how good you are."

I can play that game, too. It makes sense if you're smart enough.

We've got new highlights of Michael Cekovsky, the 7-foot teammate of Matz Stockman whom Rick Pitino recently offered a scholarship.

Speaking of our man Matz, ESPN has deemed the Norwegian sensation a four-star prospect.

Two of Louisville's biggest stars - Dominique Brown and Preston Brown - were both originally committed to play for Cincinnati. They are each aware of that fact.

Thursday night's game at Nippert Stadium is officially sold out.

This group of heroes drew the ire of just about every Cincinnati fan on Twitter Tuesday night. 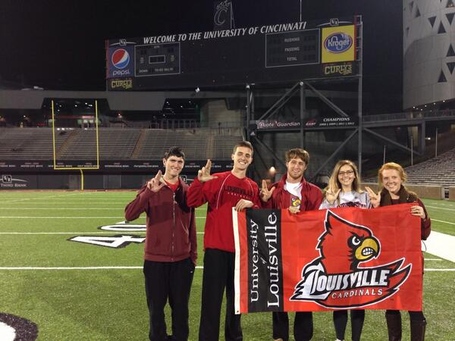 Not sure why anyone was mad, it's easily the second-best thing that's happened at Nippert Stadium all year. 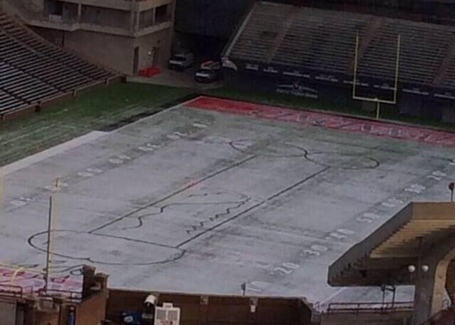 Such a dick move.

That was a penis joke.

I like to explain things to make sure that we all stay together. News and notes posts are a lot like trips to the bathroom in first grade. Everybody link up and let's move to the next Cardinal head.

The episode of SportsCenter leading into Thursday night's Louisville/Cincinnati game will be hosted by Ron Burgundy.

You think I'm going to quote Anchorman or maybe one of those new Dodge commercials here, but instead let me hit you with a little bit of this.

Edgar Sosa does not take kindly to any sort of comparison to the Harrison twins.

I look way better then those guys.LMAO.I'm a bit offended. lol RT @CardChronicle: Anyone else think the Harrison twins look like Edgar Sosa?

U of L checks in at No. 8 in ESPN's latest college hoops power rankings.

Tommy Tuberville has always had a knack for getting the job done in big games, and he's headed into his biggest yet as the coach for Cincinnati.

When Whit Babcock introduced Tommy Tuberville as Cincinnati's new head coach at a quickly-arranged news conference last December, he brought up the time they spent together at Auburn and said that he was impressed with Tuberville's leadership style, family-centered values, and how he treated people.

"I was also impressed with his knack for winning the big games," said Babcock.

I thought that might be worth bringing up before the Bearcats host Louisville a week from Thursday in one of the biggest games in Nippert Stadium history.

Tuberville has a 7-3 record in bowl games, went 7-3 vs. archrival Alabama during his years at Auburn, and has gone 6-3 in his career when facing teams ranked in the Top 5.

So what's his secret?

"I was fortunate to grow up as an assistant coach in a lot of big games and rivalry games with coaches like Dennis Erickson, Jimmy Johnson, and R.C. Slocum and the one thing that I took from all of those guys was to let the players win the game," Tuberville told me. "Don't try to outcoach the other team. If you try to do too much and throw too much on the wall and players are confused, you always end up with problems. So we'll prepare them and get them ready to go, but it's going to happen between the whistles and between the lines at Nippert Stadium. Just get out of the way and let ‘em play. There's no secret to it. Get ‘em ready to go and turn ‘em loose."

Louisville running back commit L.J. Scott, who plans on enrolling early at U of L, was named first team All-Ohio in D-III on Tuesday. You may remember Scott from this run, which landed him at No. 1 on SportsCenter's top plays.

I'll say tailgater of the year: 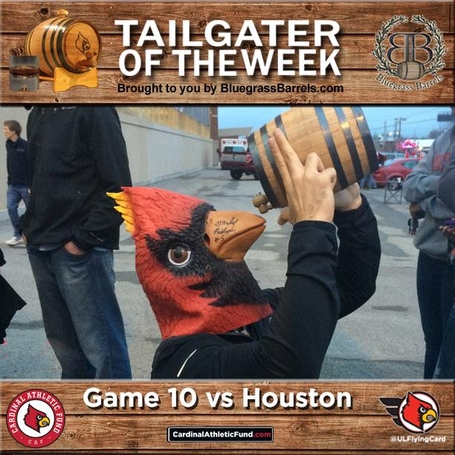 U of L running backs coach Kenny Carter noted on Tuesday that Michael Dyer has been fighting a hip injury all season and will be seeing a specialist about the injury next Monday. Carter noted that Dyer "should be ok" for next season, which leads me to believe that we likely won't see him at all in the bowl game.

With Senorise Perry gone and Louisville likely having to rely on an unproven quarterback, I'd say there's a very strong chance that Dyer is going to figure heavily into U of L's offensive plans next season.

Jimmy Buffett apparently had a giant image of Trez's dunk from the national title game behind him during his concert last Saturday, which is cool. 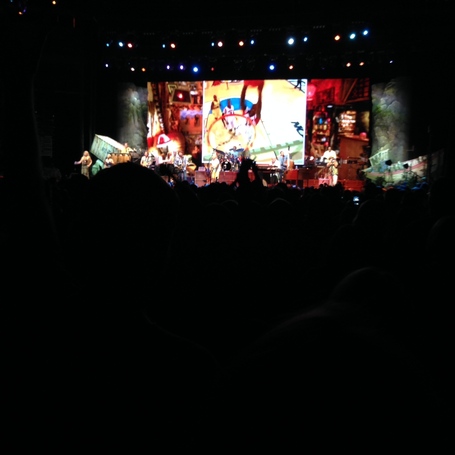 Check out our man Lord Kayoss' new deal, which now features a bluray featuring both the Duke and Wichita State games from last season's tournament run.

The folks over at Marquette preview Friday's NCAA Tournament showdown against our Cards.

Oregon's Marcus Mariota announced Tuesday that he will be returning to school for at least one more season, making it even more likely that Teddy Bridgewater will be the first quarterback taken in the 2014 NFL Draft if he makes himself eligible. Sports Illustrated currently has Teddy going No. 1 overall to the Houston Texans.

And finally, beat the 'Roos.