The Kelly family is ringing in the new year in the most fantastic way imaginable.

We haven't had an opportunity to talk about it yet, but Bloggin' Rick Pitino took to the Interwebz on Sunday to discuss his team and where it needs to improve heading into conference play. As always, his words are worthy of your attention.

The Sporting News' Mike DeCourcy is beyond confident that Louisville has no shot at repeating without Chane Behanan.

Whatever it was, it was enough: big enough to trigger the decision by the Louisville administration to remove him from the basketball program, or just enough more on top of all that had occurred previously-and certainly enough to finish the Cardinals as an NCAA championship contender.

We can confidently say this: Behanan's ex-teammates won't have to worry about what it will feel like to have championship rings on each hand. The reigning NCAA champions, already a bit light in the frontcourt to have an excellent shot at winning the 2014 title, now will play only a spoiler's role in this season's tournament.

We can? You did, but I don't see anyone else saddling up with that guarantee. It's actually just, like, your opinion, man.

Major shoutout to The Monkey Wrench for coming up with a special Cardmageddon menu just for Dec. 28. 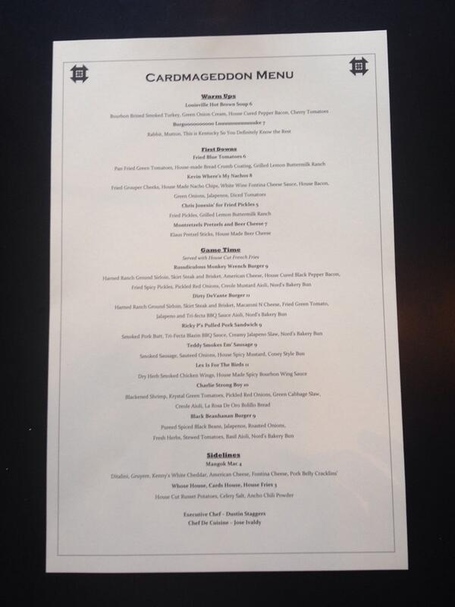 This is seriously the best city in the world.

Congratulations to Rick Pitino and Tom Jurich for successfully getting a murderer to suit up for a basketball game against a rival. You can talk a lot about big achievements in 2013, but this one ranks right up there with the best of 'em.

we have a Chane Behanan hot sports take winner: http://t.co/L4I5CKQ7us

A 3-9 Division-I basketball team won a game that counted towards its overall record last night by 104 points. This is the story of that game and that team.

As league play begins, the AAC is currently the fifth-strongest conference in college basketball when it comes to collective winning percentage.

The Russell Athletic Bowl has been the most-watched bowl game of college football's postseason so far.

It would appear as though Zach Price has some feelings of ill-will towards the Louisville basketball program.

I hate the bastard as a coach!

It's taken me years of trial and error (mostly error), but I've finally come up with the key to a successful New Year's Eve: you have to make a huge, elaborate plan for the night and mentally prepare yourself to partake in that plan before you decide that it's all not worth doing. It's only when you plan to do nothing that you feel like you're missing out for not being knocked around by drunk girls and dudes wearing t-shirts on Dec. 31 while on your way to the bar for a $12 mixed drink.

I did the big New Year's in Chicago and Miami (thanks, Orange Bowl) in my early 20s, and I'm glad I have those experiences, if only because they'll give me the peace of mind tonight of knowing how miserable I could be in another situation. I drank too much, I spent too much and I had fun, but I never ever want to do it again. The late 20s era of a nice dinner with friends followed by a relatively modest party at a friend's house has been a golden one, and I'm excited to see it continue.

Whatever you choose to do tonight, please be safe. There are plenty of things that are going to happen in 2014 that you're going to want to see. The move to the ACC is one. David Levitch is another. If you have a friend who's thinking about drinking and driving tonight, remind them of David Levitch.

So you're saying this isn't the way to play Bingo?

Calvin Pryor's hometown paper takes a look at the U of L star's big year.

One NBA scout's take on how Louisville's major prospects performed on Saturday.

On Russ Smith, who went for 19 points on 7-for-20 shooting: "Tough, competitive, small scoring 2 guard who needs the NBA D-League to spend some quality time at the point to see if he can play the position at the NBA level. Otherwise, he is a European player."

On Montrezl Harrell, who managed just 6 points and 4 rebounds as Louisville's frontcourt players came up empty: "What did he do? What did he do? He's a zero. He didn't even get off the bus."

On Chane Behanan, who went scoreless with 7 rebounds: "Did he come to the gym, did he show up?"

CBS says that with Chane Behanan out of the fold, the AAC is now up for grabs.

Maybe my favorite Russ graphic ever, which is saying something: 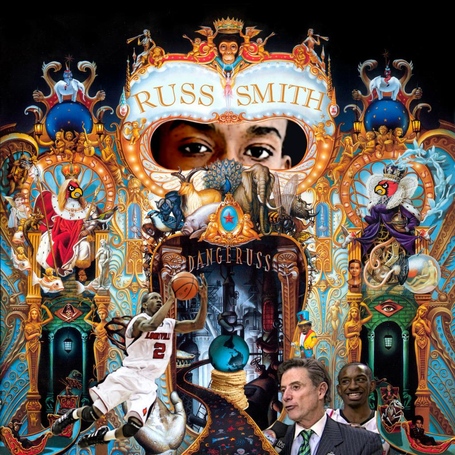 NBC's Rob Dauster says the Cards might not be a national title contender, but not because they lost Chane Behanan.

Peyton Siva is confident that Chane will get through his current struggles.

"He just can't hang out with the wrong people. He needs to deal with that and he's going to be all right. I've seen people deal with chaos before. He can do it. He knows I'll help him. All of his teammates will help him."

"I love Chane like a brother," Siva said. "Coach cares about him. All of his teammates care about him. He's just a big kid. It's tough for all of us to deal with this. I checked in on him (after the suspension) almost every week. He was doing good.

"Without Chane, we don't have a national championship and two Final Fours. But this isn't about that. This is about Chane dealing with what he needs to deal with and taking care of Chane."

And finally, I just want to wish everyone reading this an extremely happy new year, and say thank you a thousand times over for all the support in 2013. This has been, without question, the best year in my life, and everything that has happened with Card Chronicle played an enormous role in that.

You people are my everything, and I can't wait to see what the 12 months ahead have in store for all of us.