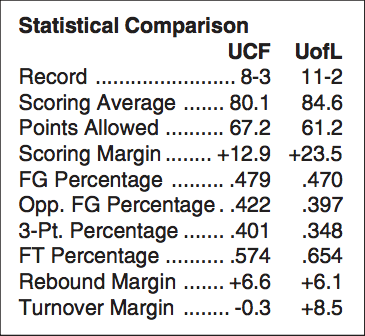 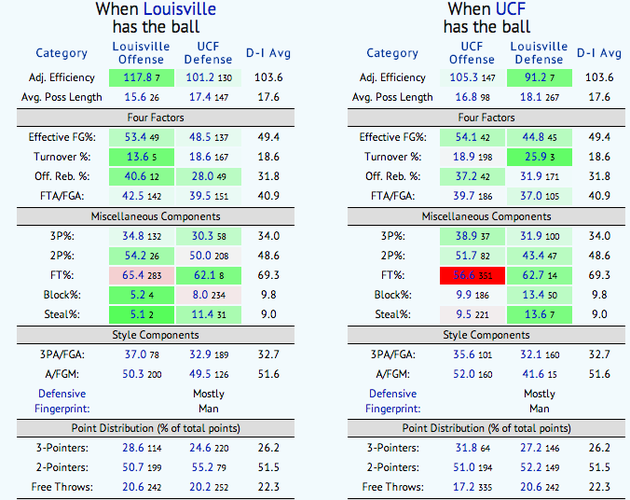 Stay strong Charlie... George is a better recruiter and UCF is true football and basketball .... #truth

The Knights (8-3) have been off for nine days following two games in the Jackson Hewitt UCF Holiday Classic. UCF has won its last five - all at home - including a 90-62 victory over Valparaiso on Dec. 22 when Tristan Spurlock paced the Knights with 22 points.

Four UCF players enter tonight's game averaging double digits in scoring, led by senior guards Calvin Newell (14.8 ppg) and Isaiah Sykes (13.9 ppg). The Knights are 7-1 at home this season, with their only loss coming against Florida State back on Nov. 13.

--Louisville has won its opening conference road game in each of the past six seasons.

--Louisville leads the nation in turnover margin (+8.5) and is fourth in fewest turnovers per game (9.5). U of L has committed 10 or fewer turnovers in 11 of its last 16 games dating back to last year. The Cardinals are generating an average of 22.3 points per game off turnovers.

--Louisville is 24-5 in the month of December over the last four seasons.

--The Cards will be the highest-ranked team to ever face UCF inside CFE Arena. It will be just the fourth time the Knights have ever hosted a ranked opponent.

--UCF won the last time it played a defending national champion, defeating No. 4 UConn in the 2011 Battle 4 Atlantis.

--U of L has scored 90 or more points on five occasions this year, three more than during the entire 2012-13 national championship season.

--UCF is 22-1 at home in December in four seasons under head coach Donnie Jones.