Share All sharing options for: Calvin Pryor will enter the 2014 NFL Draft

The continued success the Louisville football program is having has led to something new to follow this offseason: Players leaving early for the NFL Draft.

Junior safety Calvin Pryor is the first player to make the decision to cash in on a great Louisville career and national recognition he has received this year.

Pryor announced via Instagram that he will not be returning for his senior season and he will declare for the draft. 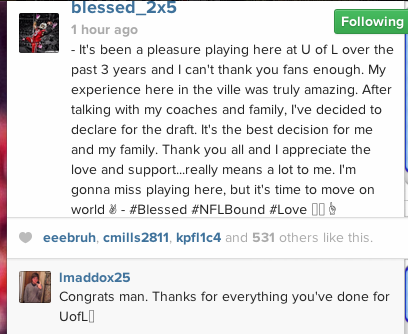 This year's safety class is pretty deep compared to most years, but Pryor has seen his stock soar this year after making a handful of monster hits and rangy interceptions in big games. SB Nation has him ranked second in its 2014 safety rankings. Most rankings don't include underclassmen until they declare, so he hasn't been mentioned by many other networks.