Sadie is prepared for what lies ahead with a cross-sport Teddy Bridgewater/Kevin Ware jersey. She's also trying to keep her mind distracted with basic block and ball games. Me too, kid...me too.

Share All sharing options for: Cardmageddon News And Notes

No more countdowns. Today's the day.

The U of L managers already got Cardmageddon started off on the right foot Friday night by pulling off a 56-55 victory over the UK managers at the Kraft Center in Lexington. The Wildcat basketball team was on hand to witness the Cardinal triumph. 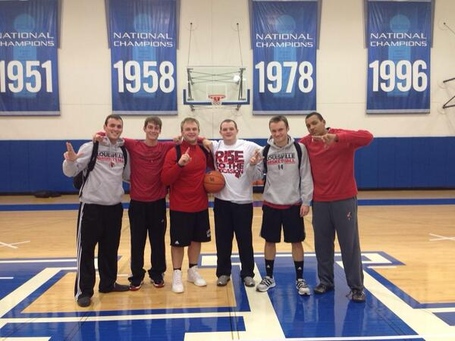 And so it begins.

John Clay of the Herald-Leader has collected 78 predictions from media members (and quasi-media members) on the big game, and 48 of them have picked Kentucky to knock off the mighty Cardinals.

Former "local hero" Teddy Bridgewater is now playing what could be his last college game against the program he used to dream of suiting up for.

"It definitely makes it more exciting,'' said UM cornerback Tracy Howard, who played at Miramar High and has known Bridgewater for several years. "Of course there's going to be trash-talking. There's going to be a lot of stuff.''

Nationally heralded running back Duke Johnson, a Hurricane and good friend of Bridgewater's who fractured his ankle and will be on the sideline watching, said the familiarity "makes it a lot more fun'' because of the high school connections. "Now we get a chance to do it at the next level on a big stage.

"That's where we like to play our best games, on the big stage when the cameras are on. I expect a good game from both teams."

The recent success of both Kentucky and Louisville is proof pudding that there isn't just one right way to do things.

Mark Coomes of Insider Louisville says that if experience means anything, Louisville will walk out of Rupp Arena with a big victory.

These are so awesome.

I can't decide if "chinskins" sounds more racist or inappropriately sexual, but it just doesn't hit the ears well. That design, however, hits the eyes perfectly.

Howard Schnellenberger addressed fans before Friday's Russell Athletic Bowl pep rally, and said that he will root for both teams on Saturday because Miami is like his son and Louisville is like his grandson.

He was also rocking a sweet "A Coach Divided" hat in anticipation of the game.

An even better look... 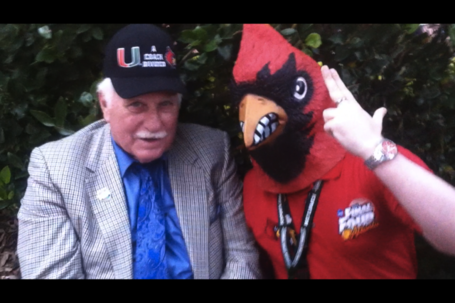 That man would legitimately have my vote if he ran for president.

Sports Illustrated breaks down the bowl game and takes the Cards by a touchdown.

Final analysis: Miami's defense made Virginia Tech quarterback Logan Thomas look like Joe Montana in a 42-24 loss to the Hokies on Nov. 9. If the Hurricanes play the same way in Orlando, Bridgewater will shred them. If Miami's defense looks like it did in the first half at Florida State -- when it forced eventual Heisman Trophy winner Jameis Winston into two interceptions -- then the 'Canes have an excellent chance to hang with the Cardinals. In the four games since Johnson's injury, running back Dallas Crawford has averaged 3.9 yards a carry. He'll have to give Miami more than that on Saturday to make the play-action game work and keep Louisville's excellent safeties (Calvin Pryor and Hakeem Smith) worried about more than just the pass.

More confidence from the Miami side:

It is very hard to evaluate how good Louisville is, given the weakness of the AAC. Charlie Strong's team rode the wave of an upset bowl win over Florida last season to high preseason expectations in 2013. I think Miami matches up with the Cardinal. The Canes have struggled to defend spread offenses, especially against running quarterbacks. Louisville runs a more traditional offense and Miami will be ready after a few extra weeks of preparation. The bowl practices are so valuable to UM's young players on defense. The secondary is healthier and will challenge Louisville's talented WR's.

WR Stacy Coley will continue to shine and make explosive plays on both offense and special teams. WR Allen Hurns will make a few big catches in the biggest moments, as he has all season. Stephen Morris will quiet some of his doubters and end his Miami career on a high note. Bridgewater and the UL offense will be able to move the ball, but the Canes will get a few bounces to go their way and force two turnovers. Al Golden will briefly celebrate a 6-10 point win, before waking up at 5am on Sunday morning, ready to get back to work on making his team better in 2014.

Dana O'Neill writes about the ups and downs of a youthful Kentucky squad.

Now that his major workload is done for the year, Santa is ready to kick back and cheer his Cards on all day Saturday. 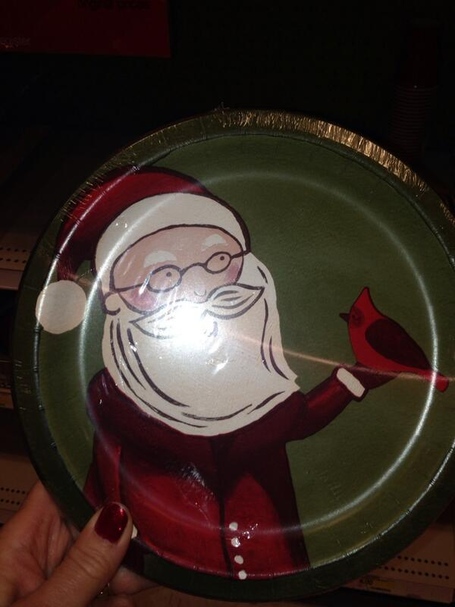 On a very serious note, Lexington native Alex Johnson has been missing for more than a week now. If anyone in that area knows or learns anything about his disappearance, please call the Lexington Police Department at (859) 258-3600.

An interesting story from The New York Times on ESPN getting millions in tax breaks from the state of Connecticut to stay in Bristol.

The ESPN stats department hits you with the key numbers to know before today's basketball game.

Apparently Louisville had about four times as many fans as Miami at its Friday pep rally.

While the disdain might be higher than ever between the two fan bases, the hatred between actual Louisville and Kentucky players is at an all-time low because so few of them are from the Commonwealth.

Quick shoutout to my aunt Betsy for winning best Christmas card this year: 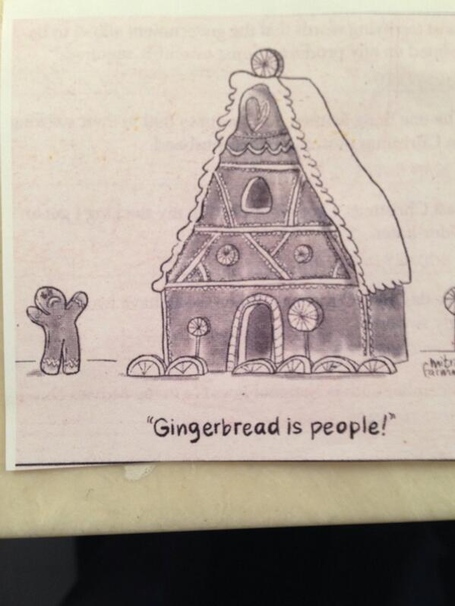 Every Hallmark should have a Soylent Green section.

The play of the Cards and the Cats over the first seven weeks of the season has led to a whole bunch of confusion in the days leading up to the big game.

Jeff Borzello of CBS says that Rick Pitino's failures and stumbles have only made him better.

"One of the vice presidents said to me, 'Why don't you take a leave of absence?'" Pitino said. "But [athletic director] Tom Jurich said, 'If he steps down for a day, I leave as athletic director.' And that was the end of it.

"It was my fault. I was certainly blackmailed, but it was my fault for being within 100 yards of that situation. You have to decide, 'Do you want to continue? Are you willing to put up with everything, not answer back, eat humble pie, and move on?' The answer had to be yes or I had to leave. I had to be humble about it. It was a strong lesson learned in my life."

What's next? Well, winning back-to-back national championships would put him in elite company, but he's not really thinking about it that way.

"I don't want to be arrogant enough to think you can win back-to-back championships," Pitino said. "If you can advance and move on, and have a chance, so be it. I don't have goals to go to Final Fours. Just every single day, make the team the best they can be."

Although he's already in the Hall of Fame, Pitino could cement himself even further among the greats with another title. And Louisville might have the players to do it again.

They certainly have the coach.

U see the picture? lol RT @Don_Guala66: @JSmith_8 how ya like UofL chances in Rupp Saturday bro ? pic.twitter.com/JKkneQVfBl

Charlie Strong says his team has lived up to expectations this year, but Eric Crawford isn't sure he agrees.

This game against Miami is perhaps the best possible alternative to a BCS berth -- but it is just that, an alternative.

For the past week, U of L's players have been soaking up the warm temperatures in Orlando and getting ready for a game most of them are genuinely looking forward to -- a bowl game against Miami on Saturday evening.

The Florida natives on U of L's roster are excited to play the game. The Miami-area players have reconnected with guys they played Pop Warner and high school ball with and against.

U of L's fan base has responded in a positive way. They've bought more tickets from the school (upwards of 11,000, at the last update from the school) than Central Florida has sold for its BCS game appearance in the Fiesta Bowl.

By all accounts, the program has moved on from the disappointment of not earning a second straight BCS berth.

But nothing Strong says is likely to rewrite that disappointment out of this team's story. And it has been a fantastic story in some ways -- especially off the field, where the Cardinals had 19 players walk through December commencement activities before Christmas. Just three years ago, the program was penalized for falling short of NCAA academic guidelines.

If you're down in Orlando for the game, here's your guide to parking. Also, there are multiple options as far as places to watch the basketball game are concerned.

Jay Bilas is all about the CCBM.

The CCBM is already making an impression on Orlando.

A CCBM also made the big screen at the Pistons/Magic game last night in Orlando. 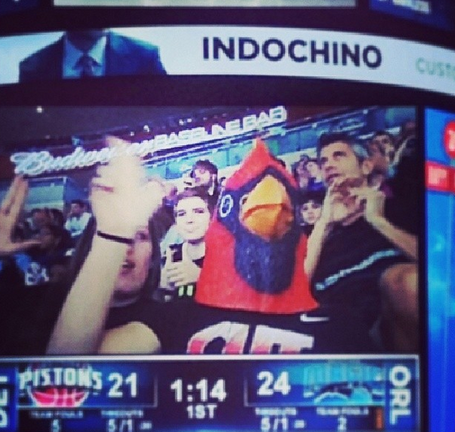 It's also making a mischief by gracing...some sort of soccer player statue? I don't know, but the act is probably frowned upon. 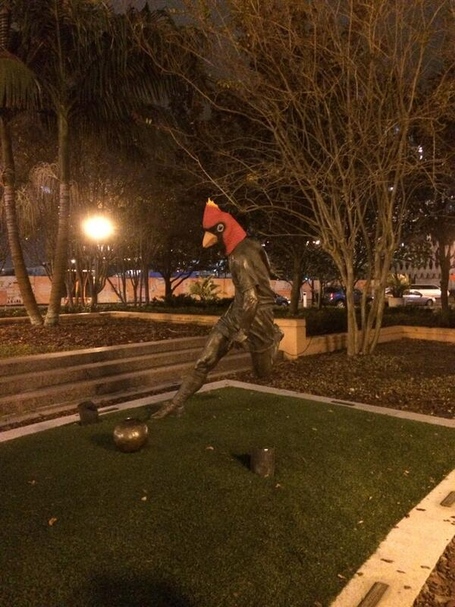 This is your moment, David.

CBS has Russ at No. 9 in its latest Player of the Year rankings.

9. Russ Smith (Louisville)
Why he's here: Smith is leading the Cardinals in both points per game (16.8) and assists per game (5.0) while shooting a career-high 45.3 percent from the field. Add that to the fact that he plays for the reigning national champs, and he belongs on this list.

Kentucky's Julius Randle also makes an appearance on the list at No. 5. Duke's Jabari Parker is No. 1.

Eric Crawford examines the cases both for and against Louisville and Kentucky today, and then picks the Cats to win a high scoring affair by seven points.

I didn't care for Babe. More of a Gordy man.

After a three-year bowl hiatus, Miami is back in the postseason and eager to make a statement.

Matt Porter of The Palm Beach Post says Louisville has an edge over Miami in every major area and believes the Cardinals will win the Russell Athletic Bowl by two touchdowns.

"It's going to be a measuring stick on just how far we need to go and just how much better we need to get," Strong said earlier this week.

Miami coach Al Golden said the move not only benefits Louisville, but the ACC and its member institutions as well.

"Then brand recognition from Boston down to Key West is really going to be strong for us in terms of television sets and in terms of population density."

The move will put Louisville on the map, so to speak, and strengthen the school's brand recognition.

"It means we are on a different stage in terms of what people think of us," said Ramsey, who is in Orlando to take part in the game and its festivities.

However, he knows the school has room to develop.

"We're on an amazing academic trajectory at the University of Louisville, but to matchup with the schools in the ACC, we've got more to do," Ramsey said.

Your bowl game preview from the fine folks at U of L.

While the Louisville/Kentucky basketball game typically matters little in the grand scheme of things, a high NCAA Tournament seed could be at stake today.

Jim Nantz will be calling a Louisville basketball game in a few hours, which melts my heart.

And just like that, in the blink of an eye...

Get your minds right.