Had to be Hot Hot.

A well-known Louisville sports figure spent thousands of dollars paying off the layaway debts of dozens of local shoppers, just in time for Christmas.

The sports figure asked to remain anonymous but told WAVE 3 News he got the idea from a friend in Florida. He wrote a check for almost $13,000 last week at the Wal-Mart off Greenbelt Highway in Pleasure Ridge Park.

Store managers identified 169 families from a list of people who, by that time, had missed their payment deadline for layaway items, said Summer Anthony, an assistant manager.

"Some people cried, a lot of them thanked Jesus," Anthony said. "They were happy there was a 'Santa' out there who was able to help them in a time of need."

Teddy Bridgewater is both "shocked" and excited to be going up against his hometown school in what could (read: will likely) be his last college football game.

A Russell Athletic Bowl hype video from the bad guys:

Louisville is no longer a rival for Cincinnati. It's now a blueprint.

There's no bad blood. Through several rounds of seismic realignment, the gentleman's agreement between athletic directors and presidents has been every school for itself.

"We're 80 miles apart. We both started as commuter schools. We share a lot of the same history, so I have no problem at all copying or borrowing from what Louisville has done and putting our flourish on it," Cincinnati athletic director Whit Babcock said. "I have all the respect in the world for Tom [Jurich, Louisville AD] and the job he's done. We'd be crazy not to follow that vision."

For those who missed the first showing, the "Year of the Cardinal" documentary is going to be replayed on ESPNU on Dec. 26 at 4:30 a.m. ET. Set your DVRs. 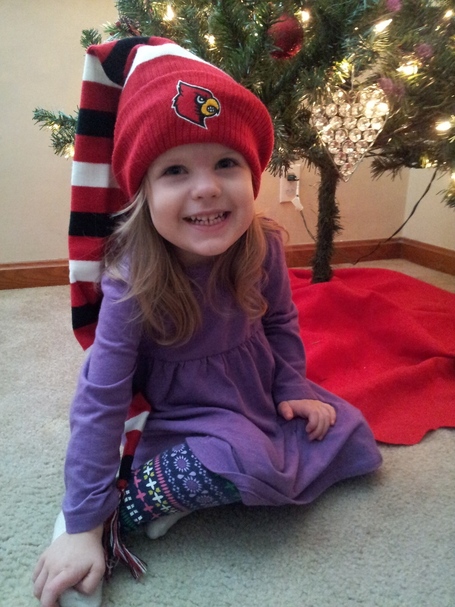 We will be doing a massive Cardmageddon "Where We're Watching" post on Friday, so be sure to email (MikeRuth5@aol.com) me with the location of any game watch parties that you will be attending (please no "by myself at my house in Saskatchewan").

Speaking of which, here's a starter for folks in the Birmingham area:

I just wanted to inform that this year (because for the last 5 years I have sought and not been able to find watch parties in Birmingham) that I (my wife and I) will have a watch party of Cardmageddon in the fine city of Birmingham AL in the Hoover Area. Welcome to ALL Cards Fans Should there be any interested my email is Jholmes@samford.edu we would LOVE to have you. I am open to any/many.

Louisville and Bellarmine are both ranked No. 1 in the latest sets of Bennett Basketball Rankings. Hoops capital of the country.

On Saturday, Louisville will have to counteract Kentucky's size with superior speed and group rebounding.

Video of the 1958 Sun Bowl vs. Drake has surfaced.

Ron Burgundy goes face-to-face with the CCBM during the annual Christmas Bambi Walk: 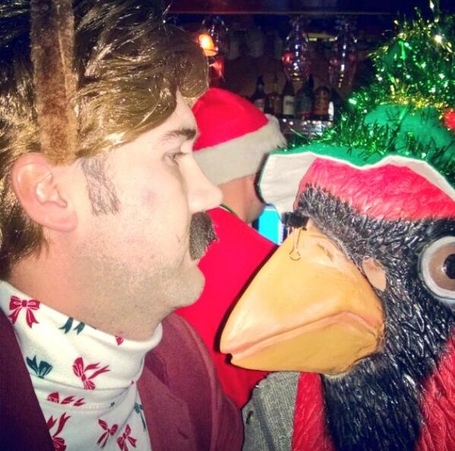 Anyone interested in purchasing a Teddy5 shirt for just 10 bucks can do so this week only by using the promo code "T5CC" over at the Strait Pinkie Store.

Miami is relishing the opportunity presented by the Russell Athletic Bowl.

Miami, meanwhile, is ranked 25th in the USA Today coaches' poll and is in search of its first bowl win since a 21-20 win over Nevada in the 2006 MPC Computers Bowl. Monday, Golden emphasized what a victory would mean to his program which spent more than two years mired in an NCAA investigation after news of the Nevin Shapiro scandal broke.

"All these things that we're learning, whether it be the bowl practice pre-site, now being on the bowl site, that's all part of it," he said. "That's all part of your team experiencing, your team learning, your team growing and we have not had that opportunity to do so. It feels great to do that. Being on the road and hearing nothing but the positives from the University of Miami, finally after 28, 29 months just feels different."

Kyle Tucker of the C-J has some good pregame tidbits from the Kentucky side.

Miami wide receiver Phillip Dorsett could be a wildcard on Saturday.

The feud rages on.

The SB Nation recruiting folks take a look at how Louisville is stepping up their game with a move to the ACC on the horizon.

The Lexington Herald Leader wonders if it might be an advantage for Kentucky to have freshmen who don't really "get" the rivalry.

UK freshman Julius Randle says he already "gets" a lot about the rivalry.

"Coach (Rick) Pitino does a great job. They are a great defensive team, play fast. They have a lot of weapons. But it's about us. I have seen them but I can't care or worry about what they do. I can only control what I do," Randle said.

Still, he admits "everywhere you go that's all they (fans) talk about" is the Louisville game.

"It's just going to be a really high-energy game for us and for the fans. This is the game they live for. This is probably the most important game for them other than the national championship game," Randle said.

Louisville and Michigan State are currently tied as the 5/1 favorites to win it all according to The Linemakers.

U of L's official Russell Athletic Bowl program is available online, and its cover is pretty awesome.

Charlie Strong expects his team to be focused on the job at hand and not Christmas, because most of the players went through this same experience two years ago before the Belk Bowl.

Per usual, Louisville is impressing with its bowl game ticket sales.

It may not be a BCS Bowl game, but Louisville fans are making the university look very good to bowl officials with the number of tickets they've purchased for the Russell Athletic Bowl.

One UofL team official told WDRB Sports Louisville had sold "slightly over 11,000 of 12500" allotted to the university by the Russell Athletic Bowl, as of Monday afternoon. That does not include tickets purchased via third party outlets.

More than 11,000 is an impressive number, considering the current landscape of struggling bowl game ticket sales.

The Orlando Sentinel reported Monday UCF returned 10,000 tickets for the Fiesta Bowl, having sold less than half its allotment. That's a BCS Bowl game, people. The Knights have sold or committed to use just 7,500 of their 17,500 ticket allotment for the program's first BCS Bowl game.

U of L signee Quentin Snider dropped 23 points Monday night to lead Ballard to the 2013 King of the Bluegrass title.

Louisville/Miami is one of the five can't-miss bowl games of the postseason.

Want to get a look at the heavy favorite for the No. 1 overall pick in the 2014 NFL draft? Then you'll want to tune in Saturday when Teddy Bridgewater and the Cardinals play the Hurricanes. Bridgewater is a Miami native and was originally committed to the Hurricanes but flipped to Louisville after former coach Randy Shannon was fired. This game may be the start of him putting the final touches on his case for the Texans to select him at the top of the draft next spring.

WDRB's Steve Andress is in Orlando, and has quotes from U of L's first bowl game practice.

In a crowded bowl season, Louisville/Miami is one of the few games that stands out.

And finally, a very merry Christmas Eve to all of Card Chronicle. I hope everyone gets to spend some quality time with family or doing something else you enjoy.

Relax and be merry for the next 40 hours or so, because after that, it's going to get real.