That's Charlie Strong hanging with Jackson, a super Cards fan at Kosair who also spent some time with Lorenzo Mauldin, Brandon Radcliff, Brett Nelson and Nick Dawson over the weekend. Best wishes for a very merry Christmas to Jackson and his entire family.

The Louisville football team arrived safely in Orlando on Sunday and will begin bowl practice in the land of Disney on Monday.

Eric Crawford starts the week by offering up his initial thoughts on Louisville/Kentucky.

11. THE STAKES. Neither team has much of a conference schedule in front of it. That's going to make a No. 1 seed a longshot for the loser -- and it may already be a longshot for the winner. But don't forget this: Nobody else is dominating, either. There are going to be plenty of slots up for grabs. In that sense, the game is big, but not a make-or-break game. There's time for either or both to put together a run. Championships aren't won in December. But in this state, bragging rights sure are.

12. CELEBRATE THE SEASON. Think about this. The last two national championships will be represented when these teams meet on Saturday. I wish they'd put both trophies at center court when they play My Old Kentucky home. Regardless, it's been as remarkable a two years as this rivalry has ever seen. And it isn't finished. Both of these teams figure to have unfinished business, regardless of what happens this week.

Crawford's piece includes some highly complimentary words from John Calipari made after UK's win over Belmont on Saturday. Kyle Tucker has a few more.

Calipari on Pitino: "What he was doing at Louisville inspired us and me here. We better work. We better get after this."

"It's a unique thing," Calipari said. "There's no other state, none, that's as connected to their basketball program as this one. Because those other states have other programs. Michigan has Michigan State, California has UCLA, North Carolina has Duke. It's Kentucky throughout this whole state, and that's what makes us unique."

Shoni Schimmel's 30 points led the U of L women to a huge 69-62 win over previously unbeaten Colorado on Saturday. The game featured a total of 56 fouls.

The Cards wrapped up non-conference play with a sparkling 12-1 record and will begin their AAC run on Sunday when they host SMU. 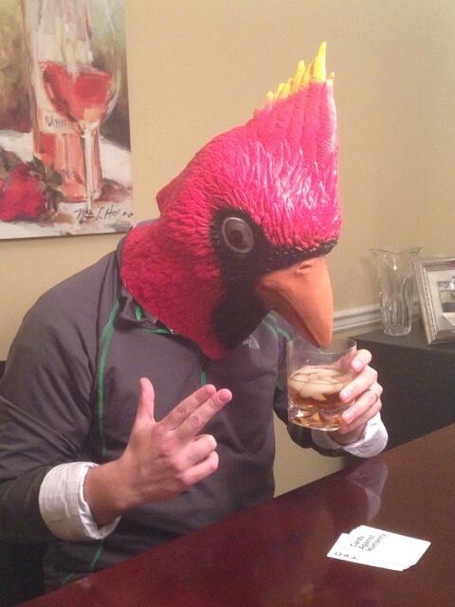 No judging on this side.

Words/terms that I wish we could all shelve this week: redneck, delusional, class, classy, thug, dirty birds, Calipayme (or other variations) and moist (just a bad word).

In over 1,000 simulations, the What If Sports simulator came up with Louisville over Miami 57.4% of the time.

Box Score: Dominique Brown scored three first-half touchdowns for the Cardinals - two rushing and one on a pass from Bridgewater - and Louisville took a 23-7 lead into the break. Though Miami limited Louisville to three second-half field goals, the Hurricanes weren't able to complete the rally. Avg. Score, 1,001 Simulations: Miami 25 - Louisville 28 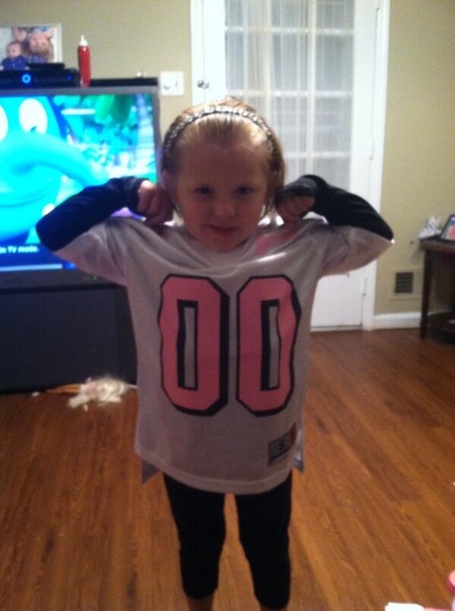 And then later wearing the Card Chronicle Bird Mask. 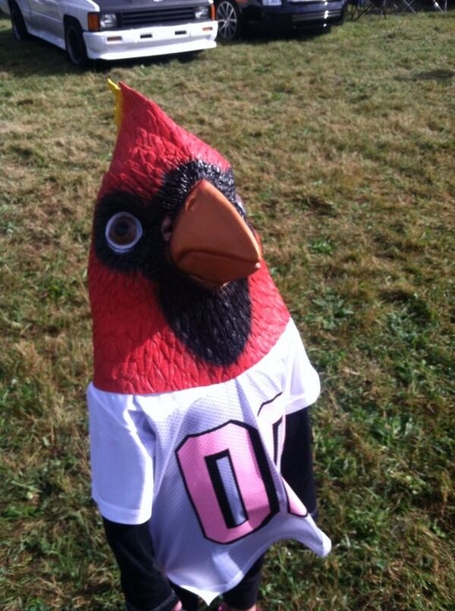 A Kentucky fan recently recorded a rap song about UK basketball. You know you're going to click regardless of what this text is so just go ahead and do it.

Even though he lit us up in the five overtime game, Garrick Sherman may have become our second favorite non-Cardinal over the weekend by absolutely destroying 2011-12 CC Least Cool Person Doug Gottlieb in a Twitter feud. As expected, Gottlieb deleted the tweets of himself unnecessarily hurling low-blows at a college athlete, but College Spun managed to screen shot most of the highlights.

Every Christmas Eve Eve, the Rutherford family gets together and eats Chinese food. I have no idea how it started or why it continued, but it's one of my favorite things each year.

The night has included such memorable moments as my brother and sister-in-law revealing that they were going to have a second child, my sister breaking out in Chickenpox, and my dad yelling at me for singing Lionel Richie's "Hello" too loudly when the piano player at Emperor of China busted it out. I don't know why the piano player thought "Hello" was a holiday-appropriate tune, and I really don't know why I knew all the words to "Hello" at such a young age, but it's a solid memory.

Tell me how to win your heart (DePaul), for I haven't got a clue...

Beaming with pride @PB_Number2 UofL graduation. ABSOLUTELY the best play u ever made as a Cardinal!! #Salute 👏👏🎓 😍 pic.twitter.com/PChNvVeQSs

Louisville's 29-point win at FIU was the 10th-largest margin of victory for a road win in program history. The largest came in last season's 80-38 rout of College of Charleston.

Some Kentucky fans are spending the early part of rivalry week debating why black people don't like them. 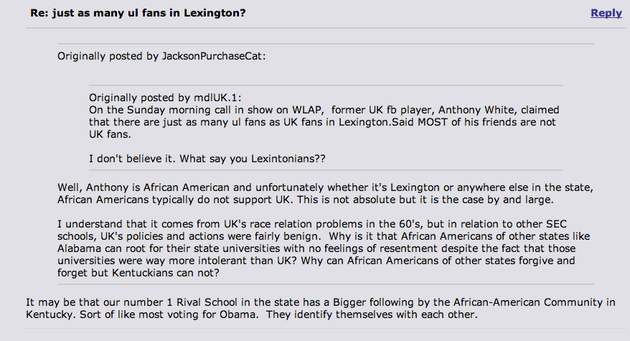 Just gonna let that one sit there and leave it alone.

Theodore Bridgewater is the No. 1 overall selection in the latest NFL mock draft from ESPN's Todd McShay.

The AP says Louisville needs to get its offense back in sync if it wants to win the Russell Athletic Bowl.

Just as troubling is how out of sync Louisville and Bridgewater have looked at times. The Cardinals broke 400 yards just twice in the final five games while Bridgewater - projected as the top quarterback selection in next spring's NFL draft should he turn pro - hasn't broken 300 yards in his past four games.

Despite public criticisms of conservative play-calling, Louisville offensive coordinator Shawn Watson shrugged off the idea of changing things up and suggested that his unit just keep moving forward.

"We just keep following up with what we do," Watson said. Bridgewater has "been pretty good at doing it, so we just keep doing what we do.

"As we go along each week, there's obviously some things you've got to manage. Some of that is injuries and the scheme you've got to face, but we're always able to put our tweaks on that and get a plan to make him efficient. He's why we win, and we put him in position to help us do that." 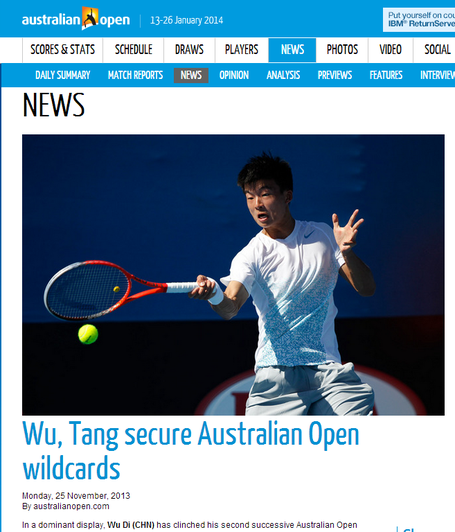 It'll be nice to have them there.

The story of why NORAD tracks Santa Claus every Christmas Eve is terrific.

Gary Parrish of CBS says Saturday's slate of college hoops (headlined by Louisville/Kentucky) is the second-best thing about this week.

The Cards make the list of the 10 best college football games of 2013. I'd just as soon they didn't.

Now, you may think this game is too high, but I don't think so. Not only was it exciting, but it proved to be a very important game in the long run. Simply put, without this win UCF isn't getting ready to face Baylor in the Fiesta Bowl right now, and Louisville was far and away the favorite to win the American Athletic before this Friday night in mid-October.

Louisville took a 28-7 lead halfway through the third quarter, but then the Knights would rally with three touchdowns in the final five minutes of the third to tie the game 28-28. Then UCF finally broke through to take the lead on a field goal with 7:36 to play. However, after that Louisville would drive 88 yards in nine plays, capping it off with a 15-yard touchdown run from Dominique Brown to make it 35-31 Cardinals with three minutes left. But UCF wasn't ready to call it a night, and responded with an 11-play, 75-yard touchdown drive that ended in exciting fashion. Former UCF quarterback and since converted receiver Jeff Godfrey would catch a two-yard touchdown pass from current UCF quarterback Blake Bortles with 23 seconds left. A touchdown pass that would not only prove to kill Louisville's BCS dreams, but just about ended Teddy Bridgewater's Heisman hopes -- fairly or not -- as well.

Dennis Dodd is the only CBS expert who likes Miami to knock off Louisville on Saturday.

And finally, if you haven't yet, I highly suggest checking out Eric Crawford's Year of the Cardinal perspective piece. It's Exhibit A of why he's the best in the game locally, and one of the best around, period.