Casey French and friends supporting the Cards from Mexico. All of us here in dreary Louisville say that we love you, but we don't have to like you right now.

First of all, a major apology to each and every one of you for the site being inaccessible for most of today. It's been a network-wide problem that the tech folks are still battling to get right. I know the comments still aren't working right now, but we're close to being back to 100%.

I can guarantee that you've been more patient than I have, and I appreciate that.

Teddy Bridgewater addressed members of the local media today and reiterated that he has not made a decision about his future and has no timetable to do so.

Although if you're looking for something to read into...

tea leaves... Teddy: "Coach Strong always talks about you come in a boy & leave a man, & I felt I was able to do that."

Teddy also said he plans on speaking with a number of current NFL players before coming to a decision. The deadline to declare for the draft is Jan. 15.

The bigger Teddy story of the week is young Theodore becoming the first member of his family to graduate college. 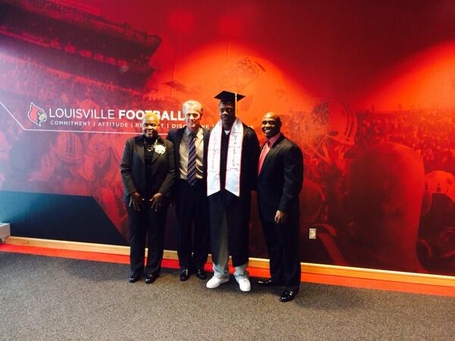 Strong has seen 93 of his 98 players earn their degrees since taking over the program in December of 2009.

Thursday's major story was U of L offensive coordinator Shawn Watson publicly calling out his critics in a Tim Sullivan column.

"I don't really listen to it," Watson said Wednesday afternoon. "I don't have time to listen to that kind of stuff because those are people who really don't know what's going on. No one (on the outside) really understands all that goes on in building a winning season ...

"It's probably a handful of little tiny people who don't matter."

When fans complain their team's play-calling is "too conservative," and that's been the most common criticism of Watson this season, the comment often betrays an inadequate grasp of the overall situation. An offensive unit does not operate in isolation, but in a reciprocal relationship with the defensive unit. One of the reasons Louisville ranks second nationally in total defense is that its offense ranks sixth in time of possession.

Run-oriented clock management may not be as thrilling as a high-octane spread offense, but it gets results. Of the Associated Press Top 25, only Notre Dame ran fewer running plays than did Louisville during the 2013 season. In terms of run/pass ratio, the five highest-ranked teams were all more "conservative" than U of L.

"The best team in college football over the last five years is Alabama," Watson said. "(Coach) Nick Saban's not an idoiot. Nick Saban is a very smart, intelligent coach (and) he does not run a spread offense. Why?

Hang 95 on Miami and I don't think you'll hear any complaints for the next six months. Ninety-four and you're pushing it.

2. I could have used about three times more Tom Jurich.

3. How did no one know the Schimmel parents marrying story?

5. That entire hour just became the soundtrack of my 2013.

We mentioned this yesterday, but Louie the Cardinal and the Miami mascot (Sebastian) might be having the most entertaining Twitter feud ever. Louie is winning.

It also just got personal.

I didn't want to be the one to bring it up, @LouietheCard, but man you could have done so much better. #woof http://t.co/aQmE86Eehe

Oh really? This one's for you, dick.

Russ Smith, Louisville: There's no denying it: The Cardinals' schedule these past few weeks has been downright bad. (Frankly, their entire nonconference was weak.) It's been easy, then, to lose sight of Smith's performance. As Master Secretary of the Watchness, it is my solemn duty to remind you that Smith is probably (note: probably) the best two-way player in the country again this season -- and much more efficient on offense, with a vastly higher assist rate, to boot. He has done very little in the past few weeks to upend that impression.

Doug Bennett just wrapped up his (almost) 30th season of attending Louisville football home games, and he has some wisdom he'd like to share.

Wayne Blackshear would like all of you to know that he is no longer "Fat Wayne," he is "Cut-Up Wayne"...or, in this picture at least, "Cut-Up Patriotic Wayne." 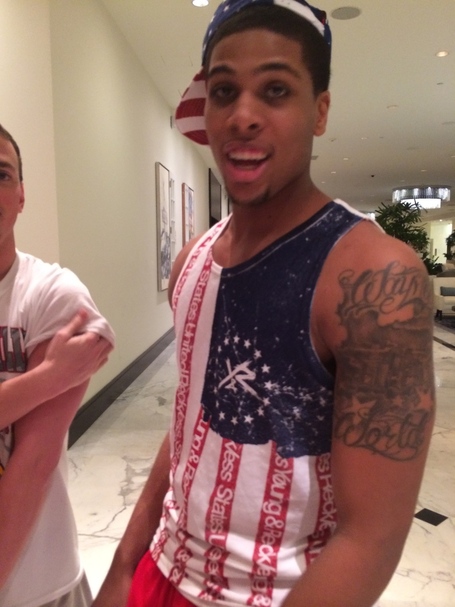 I can get behind "Cut-Up Patriotic Wayne" (CUP Wayne), but at this point I think it's impossible to just kill off Fat Wayne. Heroes get remembered, but legends never die....Fat Wayne is a Louisville legend.

I just hope Wayne has enough red, white and blue clothing to make this happen.

The first preseason poll is out, and the Louisville baseball team will open 2014 in the same position it ended the 2013 season, as the Cardinals were tabbed at No. 8 by Collegiate Baseball newspaper.

Even though the buzz between Charlie Strong and Texas has seemed to be minimal, Eric Crawford says this is a situations where you can't ignore the odds.

"I have a good job," Strong said repeatedly, or some variation of it. "We can build something special here, put our signature on it."

For now, I'd still be surprised to see Strong go. So my bet is against the odds you're seeing from the sportsbooks. But I wouldn't bet the house. It might surprise me to see Strong go, but it wouldn't shock me. (Meanwhile, I'm not sure why Texas hasn't already grabbed Art Briles -- a Texas guy -- and run with him.) The bigger worry for Louisville fans, I think, might be a possible domino effect once Texas does make a hire.

I've done this long enough to know, you don't ignore the odds. You can beat them once in a while, but they win more than they lose. And sometimes, they pull it out in the final minute.

Louisville is the second-heaviest drinking city in the United States for men, and the seventh-heaviest for women.

SEW WHAT? I CAYNT HAVE ADRINK OR 2 WEN IM WATCHING CARDS PLAY BALL??? OH IM SURY I THOUGHT THIS WUZ AMERICAN AND I WUZ A ADULT MAN. I'm not even crying about that, I'm juss...that dog commershal was on.

Jimmy Fallon gives a former Cardinal one of his 2013 superlatives. 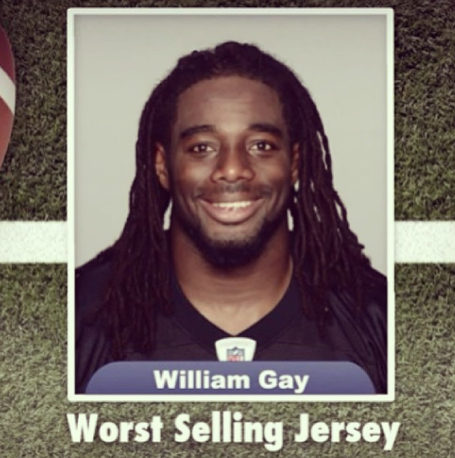 LEO Weekly wonders aloud whether or not Teddy will "pull a Russ."

Trevon Young is officially a member of the Louisville football team.

"FIU is a trap game and you will hear that from several people," Pitino said. "This is probably going to be their first sell-out in the history of their school. It is a very good home-court advantage. We have to be ready for this game, and we know that. I think our guys will be because they are a mature group."

They'll be facing one player they're rather familiar with. Buckles played three seasons at Louisville, averaging 4.6 points, before transferring after the 2011-12 season and sitting out 2012-13.

He's the Golden Panthers' second-leading scorer at 14.7 points per game and has averaged 13.0 rebounds in his last five games.

NFL.com takes a quick look at DeVante Parker and the decision he's about to have on his hands.

The seventh-ranked Louisville women's team is anxious for its rematch against an unbeaten Colorado squad that got the better of them a season ago.

And finally, John Clay writes about the U of L basketball team taking a trip South in order to get away from the constant rivalry game talk back home.