Rick Pitino said after the game that he believed Louisville's 90-60 win over Missouri State Tuesday night was the team's best performance of the season. It's an assessment that's hard to argue with.

Any team that has only one loss deep into December is one that's probably capable of making the NCAA Tournament, and the Cardinals took that challenge and boat-raced the 8-1 Bears. They held Missouri State to just 4-of-15 from beyond the arc, turned them over an impressive 13 times, and outrebounded them 51-30 on their way to a 30-point rout.

Against teams that are legitimately capable of beating you at least 5-10% of the time (a category I think Missouri State falls under), you have to take full advantage of the areas in which you're superior. Louisville did that. Despite not being a great rebounding team so far this season, the Cards killed the undersized Bears on the boards. Prime example: Louisville missed 15 shots in the first half and recovered the rebound on 13 of those failed field goal attempts.

I know everyone is dying to see the Cards face top 25 competition again, but regardless of the stature of the opponent, U of L was about as impressive as they could have possibly been Wednesday night.

There were no double-doubles, but Mangok Mathiang, Terry Rozier, Montrezl Harrell and Stephan Van Treese all finished with at least eight rebounds. ESPN's Jeff Goodman called Rozier the best rebounding guard in the country last Saturday, and I'm not sure he's wrong about that. I haven't seen one better so far this season.

Also, the city's collective crush on Terry continues to grow. It was predictable, but it's also deserved. The kid is already a heck of a player, and he's only going to get better.

All opposing players can do is watch... 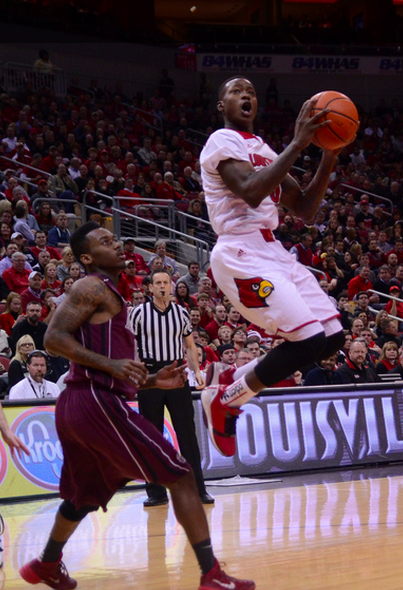 U of L moved the ball better Wednesday night than they have all season. It's one of those tidbits that you can't really dive too deeply into other than to say that it happened.

Mangok Mathiang is getting a little bit better every game. Everyone watching can see it, and the box scores are backing it up. The question is still whether or not he can hold his own against a quality frontcourt. I suppose we'll find out in 10 days.

Chris Jones showed no signs of being hampered by the wrist injury that kept him out of the Western Kentucky game. He missed a three from right wing in the first half and then was talked to extensively by Pitino soon after. Minutes later he buried a shot from the exact same spot and Pitino gave perhaps his most exaggerated fist pup of the season.

I think my favorite part of the game was seeing the Missouri State fans go ballistic after a foul wasn't called when Luke Hancock blocked that shot on the fast break in the second half, and then sit down and stare blankly after the clean block was shown multiple times on the big screen. People still don't believe that Luke can do some of the things he does.

I said beforehand that I was going to give him the credit/blame for everything that took place in the game, so kudos to assistant video coordinator Will Minardi on rising to the occasion. 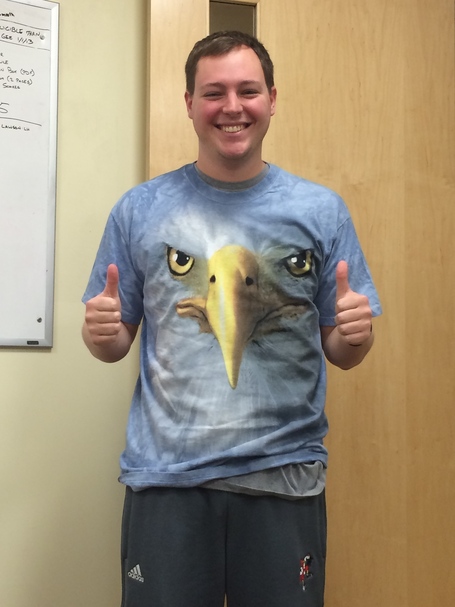 You really showed all of us something out there. Great shirt.

I realized the glaring omission I made on the quickie game preview immediately after I left my house. I still feel shame.

If anyone has been worried about Chane Behanan being upset about coming off the bench for the first time in his college career, they probably shouldn't be, because he is playing balls out right now. He also seems to have a little bit more of a pep in his step these days. I was worried about him pulling the classic Chane missed dunk during that first half breakout, but he got way up and threw down a one-handed cram with ease.

I really, really didn't like the "beat UK" chant during the final minute of the game. Not only was it being made 11 days before the game and four days before Louisville plays a completely different opponent, but it helped reinforce the belief from the other side that U of L fans are overly fixated on Kentucky.

I get why the fans (myself included) get so into this. We really don't like one another, and the taunting is almost unbearable for the entire year after a loss. I also get why the players and the coaches (the coaches especially) dislike this game so much. It's a single game played during the first half of the season, and yet the supporters of each respective side are either going to celebrate like they just won the national title, or pout like the season just ended. That type of response touches everyone involved, and it can have an averse effect regardless of which side you're on.

It's why you can understand the postgame comments from Kevin Ware on the rivalry, which will probably make their rounds as the day goes on.

It gets old. It's boring. It's just another game. Nobody's from here except a couple guys on the team. We really don't get into the whole UK/Louisville rivalry. It's just another game for us. A lot of people take it to that further extent with all the UK and U of L bashing each other, and even with a lot of stuff that they've put on us this year, we still really don't care that Kentucky exists. We just look at them as another school.

Speaking of Ware, he made a gorgeous move that resulted in a left-handed lay-up late in the game, but appeared to be limping badly on his right leg for the remainder of his time on the court. Pitino said after the game that he thought Ware was injured when he came down on that play, but that Ware told him he was kicked.

Regardless of how it happened, Ware posted the following image on Instagram Tuesday night: 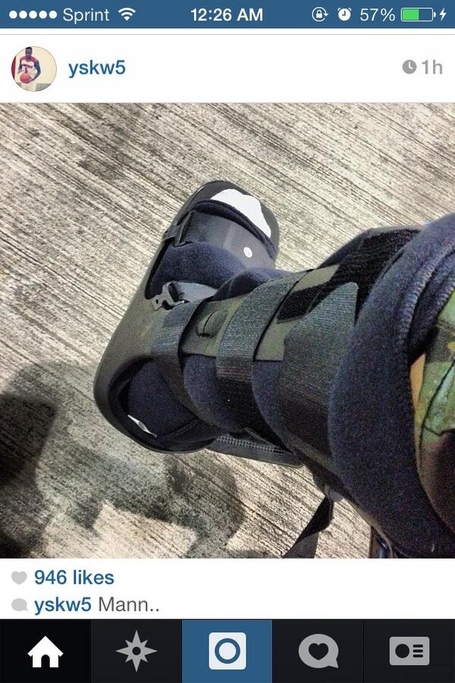 Every Louisville player who has any kind of leg, ankle or foot injury is put in a boot as a precautionary measure, so there's no way to know what the deal with Kevin actually is until it's addressed before the FIU game.

Could have used about five times more Levitch. Also, "Five Times More Levitch" would be a great name for a local band. THINK ABOUT IT, ATHERTON READERS.

He may not be where most us thought he would be by now, but Wayne Blackshear is continuing to make strides. For starters, he's shooting the ball better now than he has since arriving at U of L, and he's also making a pretty noticeable attempt to be more aggressive on both ends of the floor.

I still think Wayne might be the most unlucky player we've ever had at Louisville. A prime example was him finally hitting that tough, contested shot in the lane that has eluded him for the past two seasons...and then seeing it waved off after a very questionable offensive foul call.

I know that it seems like we've been talking about what Wayne can and can't do in order for the team to win for about 10 years now, but I'm going to do it one more time: I don't think Louisville can beat Kentucky in 10 days with Blackshear giving one of his invisible boxscore performances. With Luke still getting his feet underneath him and U of L's frontcourt rotation still far from settled, the Cards have got to get production from Wayne at the three spot in order to beat a quality opponent.

I like that Louisville at least showed zone a few times against Missouri State, and then immediately made the switch to man when the Bears started to send cutters. The matchup between the two teams made U of L playing zone for any extended period of time an error in judgment, but these are the types of things that the team needs to learn now in order to be ready for another run in March. It was nice to see them still putting that work in.

Chane getting hit in the balls and then Rick not being able to control his laughter was one of the best moments of the season so far. I also felt a little bad for Akoy Agau, who had to have been thinking, "I'm only going into the game because another guy just had a basketball hurled directly into his testicles."

He had to have been thinking that.

Lord knows I love Montrezl Harrell and his intensity, but I think it would in everyone's best interest if he reeled in his post-shot emotions just a tad. The screaming and staring after a made or a missed lay-up is getting a little old, and there have been a couple of instances in which he's been late getting down to the other end of the court because of it. I get that Trez's intensity is part of what makes him great, and I don't want him to lose that, it's just that he dials it up so much after scoring opportunities that he seems to lose sight of both himself and the game for a couple of seconds.

If you're reading this, please don't snap me in half. Also, I think us posing together in front of a lit-up tree wearing matching sweaters would make a tremendous Christmas card.

Off the phone, bro. 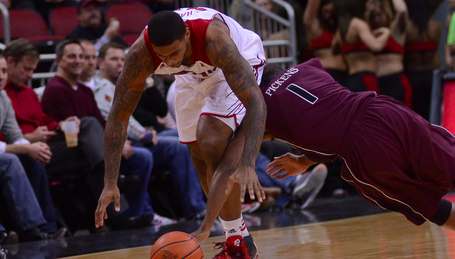 Free-throws. Not good. Get better.

I had a heated debate with the infamous Sinnard brothers during the second half about whether or not U of L should keep using "Shake" by the Ying-Yang Twins as its pre-second half song. Two of us said yes, one idiot said no. His name is Danny and he's an idiot.

Still, I'm very interested in hearing other opinions on this matter.

The pair of drinking snowmen in the lower bowl about halfway up near midcourt are my favorite fans of the season so far. Well done, gentlemen.

Missouri State played 14 guys at least four minutes last night, and 12 of them scored. I don't have the drive to look it up, but I'm pretty sure that's a record for a 2013-14 opponent. All 12 of those players scored at least three points, but only two of them scored more than five. All told, the Bears had nine players who scored either three or four points.

I'm not going anywhere in particular with this, it's just weird. Don't you think that's weird? I think you're weird.

I know that Pitino has assigned him "he's going to be a really good player for us down the road, but right now he's a freshman" status, but Anton Gill has as smooth an outside stroke as we've seen in some time. I still think there's going to come a time this season when he needs to be used as a zone-buster when the rest of the team can't seem to find its outside shot.

I couldn't be happier that we have a handful of 9 p.m. home games still left on the schedule. The environment always seems to be better, and Tuesday was definitely a marked improvement from the crowd at the last two home games, especially in the student section.

I still think the most fun I've had at a home game since the Yum Center opened was that 9 p.m. Friday night game against UConn during the 2010-11 season. The Vanderbilt (8:30 p.m. start) game the next season was also an absolute blast.

See you guys back home in 23 days. Stay warm. Write often. Don't do anything Elisha Justice wouldn't do.