Cool story from Forrest Pittman in Western Kentucky, who says: "This calf sustained a pretty serious neck injury earlier this week, and was unable to stand, or even sit upright, for several days. We wrapped it in a Cards blanket, and lo-and-behold, she managed to stand on her own early this morning. Obviously inspired by Kevin Ware."

It's starting to feel real, isn't it?

Major congratulations to Marcus Smith, who has been named a third team All-American by the Associated Press. Teddy Bridgewater and Calvin Pryor each picked up an honorable mention nod.

There's been a lot of talk about Teddy and the NFL Draft in recent days, but both Bridgewater and Charlie Strong have been pretty adamant for the past several weeks that no decision will be made until after the season. It's why anyone with Internet access can write a "Bridgewater mulling decision" story and never get called on it.

The only actual quotes coming from Bridgewater this week are in this Brett McMurphy piece.

"I've been hearing all these stories that I've made a decision -- I haven't made a decision," Bridgewater said Monday. "I will talk to my mom and the coaches before making my decision. I'm not leaning either way."

Bridgewater said he's not leaning either way, but admitted he's been paying close attention to the other quarterbacks that have decided to remain in school or declare early.

He will decide on his future "hopefully three-to-four days after" Louisville's Russell Athletic Bowl against Miami on Dec. 28 in Orlando, Fla., when he is "comfortable" with his decision. He is not going to set a specific deadline.

"Whenever I feel comfortable after discussing it with my mom, my family and my coaches," he said.

Bridgewater will graduate Thursday with a degree in sports administration. He's the first member of his family to graduate from college.

"It's not a hard decision at all," said Bridgewater, who turned 21 last month. "I know I control my future and my own destiny."

Teddy will be made available to the local media on Friday.

I like Santa even more after learning that he knows how to properly throw a left-handed L. 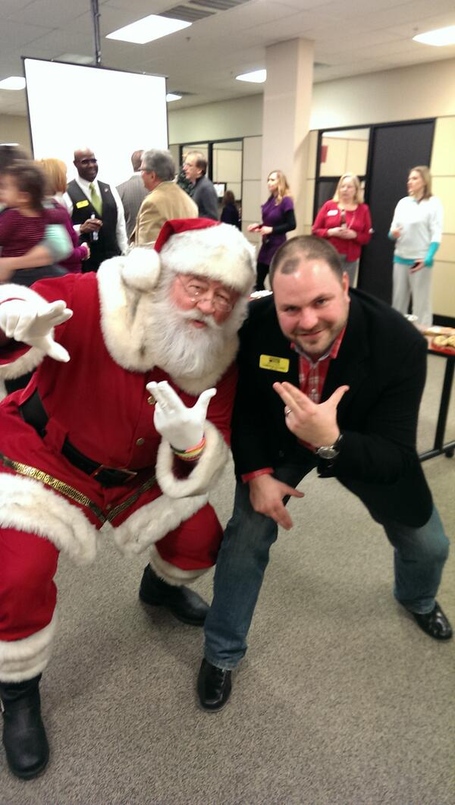 Mr. Jurich: Tear. Down. These. Silos.

The University of Louisville, through its foundation, will purchase the silos property adjacent to its campus along Interstate 65 for $3.3 million.

Approval came Tuesday from the U of L Foundation board of directors. The sale is expected to be completed by mid-January, but U of L has no immediate plans to develop the property. The 22 silos, which have become local landmarks, are expected to be demolished eventually. For years, the silos have been adorned with "University of Louisville" lettering or other university signage that overlooked the interstate.

The property has long been a part of U of L's master plan, though the university has passed on at least one opportunity to acquire it. Some ideas for academic and research uses have been floated, and it once was viewed by athletic director Tom Jurich as an ideal location for an on-campus arena, though U of L now has a new basketball home in the KFC Yum! Center downtown. Still, demolition could take considerable time, as the reinforced concrete silos likely will be costly to remove.

To be perfectly honest, I've always thought the silos were kind of unique and cool, but I'm glad the university finally has what it wants.

Keep talking about the NFL and mock drafts. Teddy's just going to be over here talking about graduating from college a year and-a-half ahead of schedule.

Our man Fluff getting into the holiday spirit: 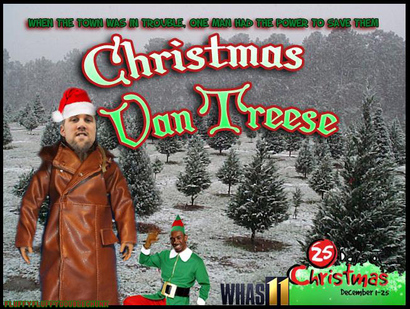 Still not convinced there's anything better than Russ on the Shelf. Every appearance he's ever made has made me laugh.

According to the NCAA, the five loudest places to play in college basketball are...

No idea how you determine something like that, but whatever, Louisville has had no trouble winning in the third-loudest place to play in college basketball.

Louisville has been recognized in the current issue of National Geographic Traveler magazine as one of 20 "Best of the World" destinations.

Kevin Ware was the third-most Googled athlete of 2013.

Louie the Cardinal has been killing it on Twitter recently. 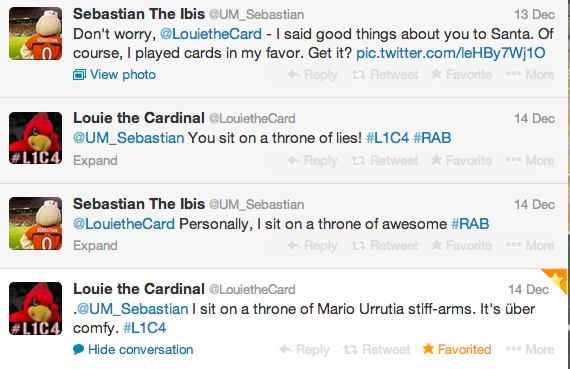 Meanwhile, the Air Louie account is still retweeting "the person below this" tweets.

Louisville was ESPN's No. 9 market for college football this season.

The Lexington Herald-Leader offers up the 50 things it believes should comprise The Kentucky Bucket List.

Vance Bedford has been named one of the five finalists for the 247 Sports Defensive Coordinator of the Year award.

I feel like a few of these pictures start popping up every winter, but this one (via Aron Norman) is particularly lovely. 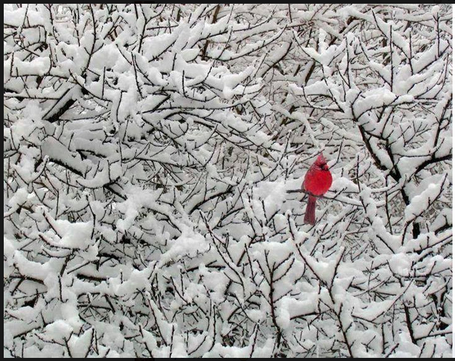 Montrezl Harrell has 25 dunks through 11 games this season, and is on pace to shatter the U of L single season dunk record (59) currently owned by Pervis Ellison.

Former Cardinal standouts Tony Williams (basketball) and Ronnie Ghent (football) are going to receive their degrees from U of L on Thursday. Well done and congratulations to both of you.

Louisville Kentucky Is The Best Crowd Of The Tour So Far.. WoooooW #JT2020TOUR #2020ExperienceOfficialTourDj #DjLife 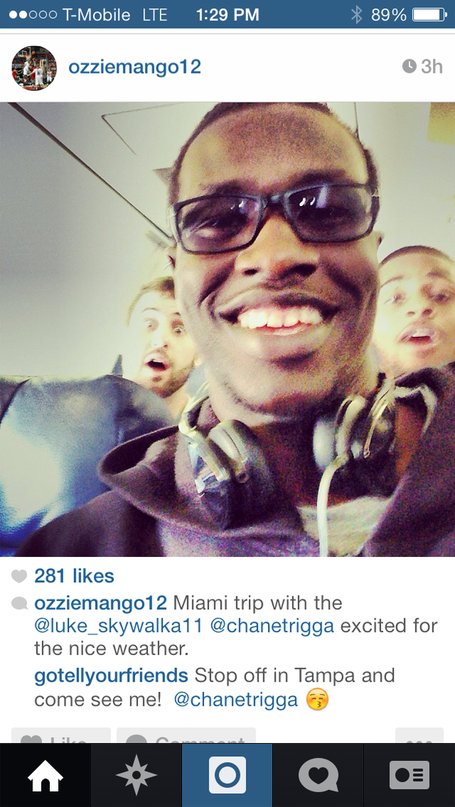 Eric Crawford talks Terry Rozier in the wake of another strong rebounding performance from the freshman last night.

Some words from Kyle Kuric:

Woke up here in Spain to news that we collected 2,606 toys at the game last night! I wanted to thank each and every one of you for making this happen. Most of the toys went straight to Home of the Innocents and Kosair's to be stored until Christmas Day. For those of you still interested in donating, you have until this Friday at 5pm to drop off toys at the Louisville Athletic Office on the 3rd Floor of the Student Activities Center. The rest of the toys will be flown over to Spain next Monday. They will go to abandoned kids at an agency called "Nuevo Futuro" and to a children's hospital as well. Again, thank you for making this possible, happy holidays and GO CARDS!!!

As of right now, I think Calvin Pryor is without question the non-Teddy junior most likely to bounce for the league.

#UofL Jr S Calvin Pryor said he's had the NFL Draft on his mind since the preseason, but graduating is a factor that could bring him back. 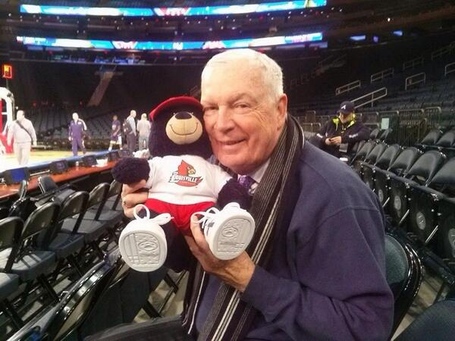 We finally really did it. You maniacs! You blew it up! Damn you. God damn you all to hell.

Teddy Bridgewater could spell trouble for the Miami defense...literally. He's a college graduate.

Jerry Palm's latest Bracketology for CBS has Louisville as a five seed in the East. Insert combination of laughter and rage here.

And finally, the folks over at Yahoo are already offering up their Russell Athletic Bowl preview, calling it a "precursor to a conference rivalry for Louisville."