Last Meeting: Louisville won 74-56 in the quarterfinals of the 2006 NIT 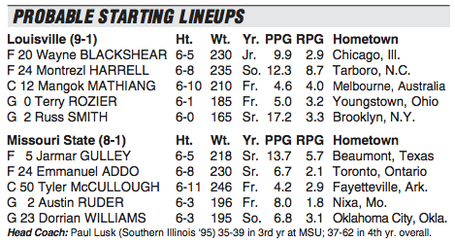 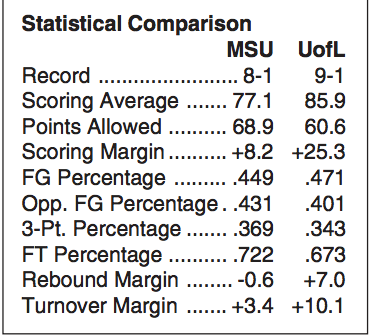 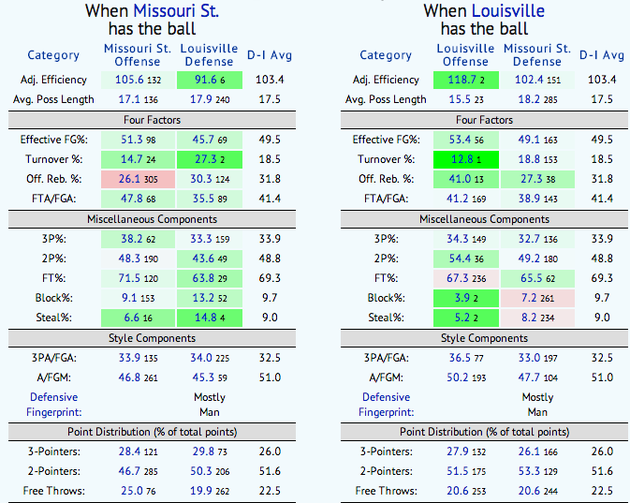 Missouri State boasts an 8-1 record and registered its second-consecutive win after defeating Oral Roberts 70-67 on Friday. The Bears' only loss of the season came against Virginia on Nov. 30, a day after Missouri State posted a 73-67 win over Texas A&M.

In the win over Oral Robers, Marcus Marshall paced Missouri State with a game-high 20 points in 25 minutes off the bench. Nine of his points came from the free throw line. Jamar Gulley added 15 points, and Christian Kirk, who came off the bench, added 12 points and six boards.

The Bears, who received 39 points from their bench, turned the ball over just seven times.

For the season, Gulley and Marshall lead the team in scoring, averaging 13.7 and 13.4 points, respectively. Gulley ranks first on the squad with 21 steals and 5.7 rebounds per game.

Collectively, the Bears rank 12th nationally in turnovers per game (9.9) and 18th in fewest turnovers (89). They are averaging 19 free throws made per game.

Missouri State is under the direction of third-year coach Paul Lusk, who's directed the team to a 35-39 record. The Bears return all five starters from last year's team that went 11-22 and lost in the Missouri Valley Conference Tournament quarterfinals to Wichita State. The team was picked to finish fourth in the conference's preseason poll and Marshall earned preseason league honors.

--Louisville leads the nation in turnover margin (+10.1) and in fewest turnovers per game (8.9). U of L has committed 10 or fewer turnovers in 10 of its last 13 games dating back to last year.

--Tonight's game will be Louisville's last home game for 23 days. It will be the the longest stretch the Cards have gone without a home game since 1980-81.

--The last time the Bears played a defending national champion was 12/30/88 -- an 82-73 loss to Kansas at the BMA
Holiday Classic in Kansas City.

--I've decided that assistant video coordinator Will Minardi will be blamed/credited for everything good or bad that happens tonight. Just want to see how he responds to some heat. That's what December's for.

--I've been a fan of Missouri State ever since Louisville played them in the '06 NIT and then-head coach Barry Hinson said the following after the game:

"I have been in a lot of leagues and played in a lot of college basketball. . The people of Louisville have been more than cordial. I have only been to one other arena where the crowd that applauded our players when we left. This is only the second arena and that is a lot of class and we really appreciate that. It meant a lot to these seniors to be applauded. I am also really proud of Taquan. I thought he played great in his last game here in Freedom Hall and I am really happy for him. I have never been in the Hall and I was impressed. I was just hoping that this truck convention would start a day early and we could have had this game in Springfield. I thought your fans were awesome tonight. We got to 48-39 and I thought were going to make a run but 14,600 some people stood up and said you are not going to make a run. They did a good job and should be commended."

--Louisville is 22-4 in the month of December over the last four seasons.

--Louisville is averaging 20,620 fans per home game this season, which could mean a new single-game attendance record for the Bears. MSU's all-time record of 20,172 was set in the 1999 NCAA Tournament.