Maybe I just wanted to see what it felt like to be at the top of news and notes? Would that be so wrong? Why are you looking at me like this? Every dealer has to taste their own product at least once.

In all seriousness, I couldn't be happier to officially share with you all that Ms. CC is going to become Mrs. CC, something I had to make happen before this incredible year came to a close. Just reinforcing the age-old stereotype that beautiful, intelligent women are innately drawn to sports bloggers.

Also, please note that I'm making sure I'm holding more of the national championship trophy in that picture than she is. Clearly, I wasn't ready for this step in April.

Mangok Mathiang has been named the AAC's Rookie of the Week.

The redshirt freshman scored a season-high 13 points - 10 came in the first half - on 5-of-5 shooting. He grabbed five rebounds, four on the offensive end, in the win over Western Kentucky in addition to recording his team-leading 12th blocked shot.

Mathiang, who is averaging 4.6 points and four rebounds per game, is tied for 11th in the conference with 1.2 blocked shots per game. He is shooting 58.3 percent from the field.

Marcus Smith and Calvin Pryor are both second team SB Nation All-Americans. We also got the AAC Offensive Player of the year selection right.

Louisville remains the No. 1 seed in the South in the latest installment of Joe Lunardi's Bracketology.

The distinction also landed the Cards a prominent spot on the front page of ESPN's college basketball section: 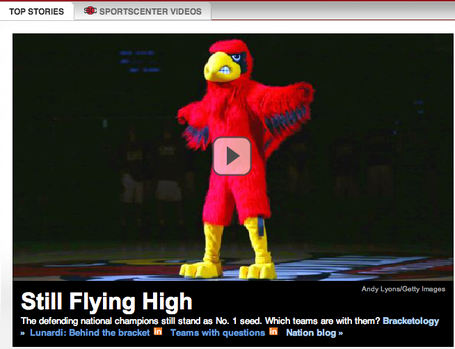 If you're still looking for Christmas gifts, might I suggest Lord Kayoss' high-quality bluray copies of all the most memorable moments from the Year of the Cardinal? He has a special deal which ends after this week.

The full senior bowl rosters are out, and as expected, they include AAC Defensive Player of the Year Marcus Smith.

If you're headed down to Orlando for the bowl game, then Joey Wagner's pregame U of L party on the 27th is something you should think about attending. The events in New Orleans and Atlanta were both pretty unforgettable.

I don't know any of Business First's "50 people in Louisville you should know." I'm sure they're all lovely and share an affinity for Cherokee Park, though.

Yahoo's Dave Allen says that Teddy needs to declare for the draft.

The U of L women's team's upset of Baylor makes The Atlantic's list of the "most epic wins and heartbreaking losses" of 2013.

For almost the entire 2012-2013 season, the dominant question in women's college basketball had been, Can anyone stop Brittney Griner and the Baylor Lady Bears from earning a second consecutive NCAA title? Griner had sparked debate over whether she was the best to ever play the women's game, and by the time the Lady Bears met the Louisville Cardinals in the Sweet Sixteen round of the NCAA Basketball Tournament, the Bears had won 74 of their last 75 games.

"We heard that the only way we were going to win is if Baylor's bus didn't show up," Louisville forward Monique Reid said later.

But that was after she'd sunk the two most important, narrative-changing free throws of the year: Reid's two points from the line pushed the Cardinals past the Lady Bears by one point for a startling 82-81 upset victory.

While the Baylor players wiped away tears in their locker room afterward, the Cardinals celebrated and posed for photos with NBA star Kevin Durant. But the real celebrity at the scene, make no mistake, was Louisville's junior guard Shoni Schimmel, who provided one of the tournament's most showstopping highlights: a behind-the-back three over Griner's head (despite being, at 5'9", almost a foot shorter than Griner).

Before the game, coach Jeff Walz had told his Louisville players, "If you come out and play scared, it's not going to matter." Schimmel took that seriously, it seems, telling reporters later that her plan had simply been to "keep going at her"-Griner was human, after all. "I mean, she's Brittney Griner," Schimmel said. "But I'm Shoni Schimmel."

If you're going to propose yo your girlfriend in a way that's going to make local news, maybe you should make sure you don't have a pissed off ex who's going to out your unfaithful past on social media.

SB Nation's resident stat guru, Bill Connelly, has a formula which predicts Louisville will defeat Miami by somewhere in the vicinity of 39-33.

You've probably seen this by now, but Rick Pitino's (unintentional, apparently) photobomb last night at the Timberlake concert was golden. 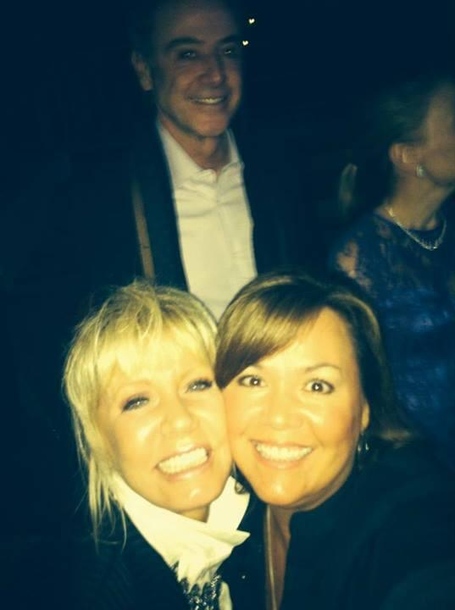 Adding fuel to the Russell Athletic Bowl fire was three-star safety Marques Gayot of Lake Worth, Fla flipping his commitment from Louisville to Miami over the weekend.

Like the Cards, Miami began its bowl preparation over the weekend.

USA Today says Charlie Strong is one of the top candidates to replace Mack Brown at Texas.

5. Charlie Strong, Louisville. Strong is another accomplished coach with a sizable buyout: UT would owe Louisville $5 million if it hired Strong in 2013 - and $4.375 million if the school waited until 2014, in case you were wondering. Beyond the money, Texas would also have to convince Strong to leave a very comfortable and successful position at Louisville, which leaves the American Athletic Conference to join the ACC after this season. But what makes Strong an appealing candidate? He has big-school experience - as at Florida, where he helped win a pair of national titles. He has 11 wins in each of the last two seasons at Louisville, including a Sugar Bowl win against the Gators last January. Strong would have an enormous impact on the Longhorns' defensive production, obviously. UT would want to hear his thoughts on an offensive staff before advancing past a preliminary stage, but Strong is a logical second-tier candidate for the opening.

No, bro, I totally believe you. Where did you and JT hang out together after last night's concert again?

The University of Miami and the University of Louisville are partnering to participate in a cooperative community service project this year in Orlando during the Russell Athletic Bowl.

U of L will be the home team for the Russell Athletic Bowl, which led to some speculation that the Cards might wear the now larger-than-life black uniforms. Apparently that's not the case, as the official Louisville football Facebook page has released this image of the jerseys that will be worn for the game: 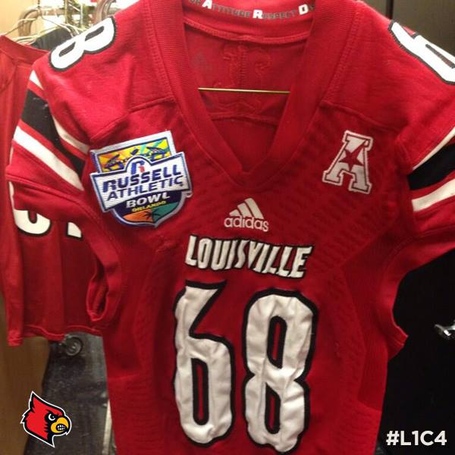 The U of L women beat Austin Peay by approximately 7,000 points on Saturday.

With less than two weeks to go until the game, both Louisville and Kentucky are surprisingly lacking a single big-time win.

Well it's impossible to argue with this logic.

Is that what we're doing for page views these days? We're just making an outrageously declarative statement in the headline and then doing nothing in the body of the post to back it up? I guess it's working.

Al Golden discussed Louisville for the first time on Saturday.

"We have to play really well. This is a very talented man," Golden said. "He has great commend on the offense. He has speed, good corps of receivers, knows how to distribute the football and doesn't make many mistakes with the football, can move in the pocket. It's going to be a great challenge for our corners and safeties."

Offensively, Golden thinks that Phillip Dorsett will be ready for face Louisville and get quality repetitions for the first time since the North Carolina game. Dorsett saw limited action against Pitt late in the game.

"I'm expecting him to be healthy, I really am. I'm as anxious as you," Golden said. "I've been out all week. I think we have a green light with him. We should see Phillip back to normal which hasn't been the case since the North Carolina game for us. We would love to have Phillip back - he was really having a heck of a year when he got hurt."

The Louisville defense knows what to expect from Miami in 12 days.

And finally, Mark Ennis and I are back on the radio tonight form 6-8 in what I will try to turn into a Detroit Lions pregame show. Listen live or anytime at ESPNLouisville.com.