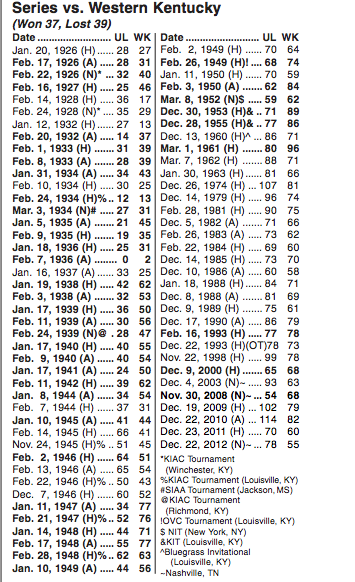 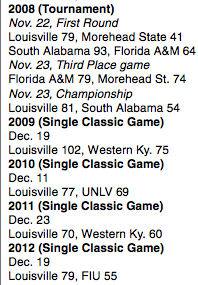 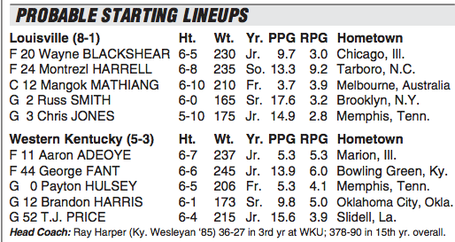 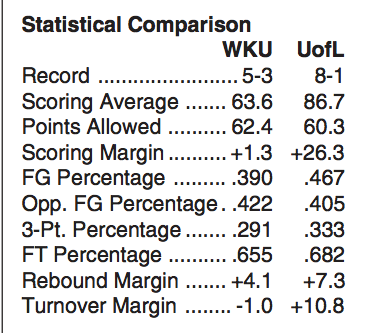 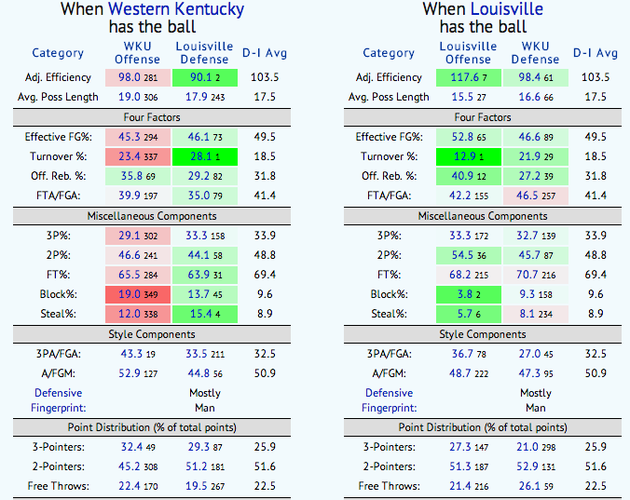 Coming off back-to-back magical runs in the league tournament, Western Kentucky was picked as the preseason favorite in the Sun Belt. The Tops enter Saturday's game with a respectable 5-3 mark, with all three losses coming on the road.

WKU is led by juniors T.J. Price and George Fant, who average 15.6 and 13.9 points, respectively. However, it was senior Brandon Harris who scored a career-high 30 in the team's latest game, leading the Hilltoppers to a 69-60 win at Southern Illinois. Harris hit 8 of 14 from 3-point range after entering the game 4 for 23.

Harris had a team-high 14 points a season ago at Louisville, but he shot 5 for 18 and Western Kentucky finished at 38.8 percent in a 78-55 defeat. Russ Smith scored a game-high 20 points. Trez also had a really cool dunk.

The Hilltoppers lead the all-time series with Louisville 39-37, but they've lost all four meetings by double digits since shocking the then-No. 3 Cardinals 68-54 on Nov. 30, 2008. That victory also marks their last win over a ranked team.

--The Billy Minardi Classic, presented by Kentucky One Health, Sun Tan City and Planet Fitness, originated in 2002 to honor the memory of Billy Minardi, brother-in-law of U of L Coach Rick Pitino who died in the Sept. 11 terrorist attack on the World Trade Center. Louisville has won 10 championships in 11 years in the event, in which the Cardinals have a 14-1 record.

--This will be Louisville's 77th meeting with Western Kentucky. Only Cincinnati (97) and Memphis (87) have squared off against the Cardinals more times.

--Louisville leads the nation in turnover margin (+10.8) and is fourth in fewest turnovers per game (9.1). UofL has committed 10 or fewer turnovers in nine of its last 12 games dating back to last year.

--Louisville has won four straight (all by double digits) and 21 of the last 24 meetings in this series. The Cardinals had won 14 straight in the series before Western Kentucky beat U of L 78- 77 in Freedom Hall on Feb. 16, 1993 as Dwayne Morton missed a lay-up at the buzzer.

--Fifteen games in this series have been decided by five points or less.

--With three steals vs. Louisiana Lafayette, Russ Smith passed the career 200 steals mark. He is currently 53 behind the career record of 254 set by Peyton Siva.

--Louisville is 21-4 in December over the last four seasons.

--Louisville and Western Kentucky are among 22 programs in the nation that have won at least 66 percent of their games over the last 13 years. Through games of Dec. 8, Louisville has a .740 winning percentage since U of L Coach Rick Pitino took over the reins of the Cardinal program, ninth best in the nation. Western Kentucky has won 66.3 percent of its games over the last 13 years, 21st nationally.