The U of L football program tasted postseason defeat for the first time in 1977, when Keith Thibodeaux and the Louisiana Tech Bulldogs dealt the the Cards a 24-14 defeat in the Independence Bowl.

Louisville actually struck first on a 60-yard punt return for a touchdown by Kevin Miller just 1:20 into the game, but their lead would be short-lived. Thibodeaux fired a pair of touchdown strikes and Charlie Lewis ran for another score as the Bulldogs reeled off 21 unanswered points to take a commanding lead in the opening quarter.

"I don't think they faced anyone who passes as much as we do," Thibodeaux said. "Their defense is strong, but the secondary is the weakest part. And we wanted to test that early.

"They like to blitz. We hit them on a couple of quick passes for good yards, so they stopped. The first half was the best I've had all year."

"They throw the ball better than anyone we've ever played," he said. "Louisiana Tech has an outstanding pass offense."

Maybe not the most in-depth quote for the situation, but whatever.

Thibodeaux, the game's offensive MVP, finished 19-of-39 for 287 yards and those two scores. His performance helped the Bulldogs overcome three lost fumbles, and a ground game which managed just 48 yards on 44 carries.

Also helping Louisiana Tech overcome those numbers was a dismal Louisville offense, which could manage just 161 total yards and only 11 first downs. The Cardinals put the ball on the ground a staggering eight times, losing three of those fumbles. They were also penalized eight times for a total of 92 yards.

U of L stayed within striking distance thanks largely to the performance of eventual All-American Otis Wilson, who was named the game's Most Valuable Player on defense.

The Bulldogs, champions of the Southland Conference, would finish the season 9-1-2, but would not taste postseason victory again until 31 years later in the 2008 edition of the Independence Bowl. Louisville wrapped up its year 7-4-1, and the wheels began to turn on a 14-year bowl drought.

If you know where there's video of the game available on the Internet, please post a link or email me. For now, the best I can do is a box score: 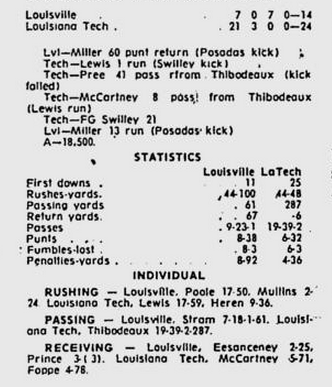