Nearly 13 years after their debut postseason performance, the Louisville Cardinals parlayed a Missouri Valley Conference championship into a Pasadena Bowl appearance on Dec. 19, 1970 in...well, in Pasadena.

Lee Corso's Cards led for the vast majority of the game, riding a strong rushing performance by quarterback John Madeya and a tremendous defensive effort from Paul Mattingly. Mattingly was ultimately named the bowl's Defensive Player of the Game after recording a game-high 17 tackles and blocking a 32-yard field goal attempt in the fourth quarter.

A strange play near the end of the game seemed to secure victory for Louisville. Madeya threw a screen pass to tailback Tom Jesukaitis, who then threw another pass to Cookie Brinkman for a touchdown. Only one forward pass per play was permitted at the time, however, and the touchdown was called back and the Cardinals were penalized five yards.

Long Beach State was ultimately able to overcome an eight-point fourth quarter deficit with a safety and a nifty touchdown run by fullback Leon Burns.

Louisville finished the season with an 8-3-1 record.

As you might expect, there is no available video from a 1970 Pasadena Bowl that ended in a tie, but we do have a box score: 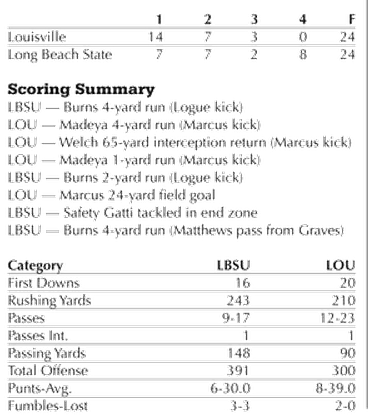