T.J. Price thinks Louisville is a "pretty good team," and more quotes from the Western Kentucky players and staff.

Yahoo's Dave Allen says that Louisville is built for long-term success in the ACC.

Having played their last game in the Conference Formerly Known as the Big East, the Cardinals will join the (more highly regarded) Atlantic Coast Conference next summer. Attempting to make such a competitive jump has buried other teams in the past; it's a fair question to ask whether Louisville, whose toughest competition came from playing Cincinnati and UCF this year, can remain a top 25 team while playing a much tougher schedule next year.

Short answer: It shouldn't be a problem. By most standards, this year's edition of the Cardinals is better than the 2012 team that went 11-2 and rolled over #4 Florida by 10 points in the Sugar Bowl. This year, Louisville finished the regular season 11-1 and placed 18th in the BCS rankings (#21 in 2012). Only a last-minute score by Central Florida kept the Cards from an undefeated season. The scary part is that it's still a young team, and should return a majority of its starters next year.

CBS looks at its top 10 early front-runners in the race for college basketball's Player of the Year, a list which could use a massive injection of diculousness.

Charlie Strong says that while his players have been relaxing during their week off, the coaching staff has been busy recruiting.

"I gave them a week off since we just played a game against Cincinnati," head coach Charlie Strong told Orlando reporters on Wednesday. "We are going to start our preparation on Saturday and practice our way up until bowl time."

According to USA Today, U of L has the 21st-highest-paid staff of assistants in college football.

We wish you a Schelly Christmas (via Howie Lindsey): 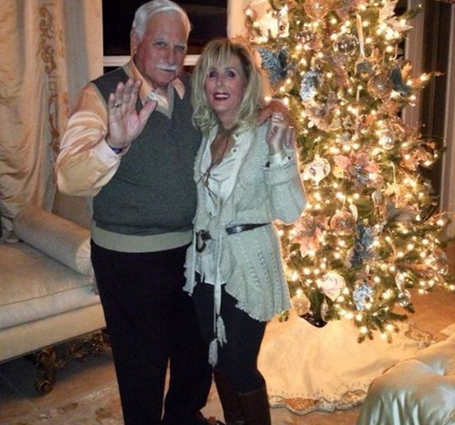 Drake's Chris Creighton, and not Louisville's Kenny Carter, has been hired as the new head football coach at Eastern Michigan.

After being stuck at a red light for 30 mins I returned that manual. Say hello to my new baby! It's auto tho!! Lol pic.twitter.com/9iw9kZEwJy

Are the chipmunks murdering Dave at the end of "Christmas Don't be Late?" I think he's dead.

The NCAA announced Wednesday that the city of Louisville will host 13 national championships over the next 13 years.

Next year, the Division II Fall Festival, which is comprised of cross-country, soccer, volleyball and field hockey, will be held at Bellarmine University.

In 2016, Spalding will host the Division II cross-country championship.

In 2017, those schools and the University of Louisville will host field hockey.

UofL will also host the men's and women's cross-country championships.

Oneshiningmoment, creator of the CCBM March to the March, has an available (and free) Russell Athletic Bowl ticket. I promise it will be entertaining.

SB Nation's longform on Dick Trickle has been named one of the five best of 2013. Give it a read if you have some extra time because it's very, very good.

According to FoXSports.com, 78 percent of the participants in the network's bowl pick 'em game have taken Louisville over Miami.

Travon Young, who is expected to sign with someone next week, and four Cardinal commits will be taking official visits to U of L this weekend.

Young told Rivals.com (subscriber link) this week that U of L, Ole Miss and Iowa, which has made him a new offer, are his top three options.

U of L is one of the nine best colleges in the country for cyclists.

USA Today's Sports on Earth ranks Louisville as the fifth-best coaching job in all of college basketball. It ranks Kentucky first, because it's affiliated with USA Today.

Santa Strong really should have made a cameo at the end of this U of L holiday spot:

The U of L women's lacrosse team has released its 2014 schedule.

Rick Pitino had once planned on Richard Pitino replacing him at Louisville, but now he's not sure if his son will ever leave Minnesota.

"He said dad, I could die in this program. He was really humble about it. He said we're the only Division 1 school in the state. It's just an awesome program and I think we can really turn it around into a big time situation," Pitino said.

It wasn't that long ago his son was on the Cardinals' bench as an assistant. It was a match made in basketball heaven with Pitino hoping to hand off the baton to his son.

"What I said to him - listen, take your time as an assistant. Spend 6 or 7 years with me and replace me. Our athletic director loved him. He said no, this is an opportunity of a lifetime," Coach Pitino said.

The Cardinal football team will begin bowl practice on Saturday.

And finally, I'm back on the radio with Mark Ennis tonight from 6-8 on ESPN 680. Listen live or anytime at ESPNLouisville.com. Sports will be the topic.