When Louisville takes the field against Miami on Dec. 28, senior safety Hakeem Smith is expected to make his 51st overall (and consecutive) career start. When he does, it will break the tie for the U of L career starts record he currently shares with former Cardinal offensive lineman Travis Leffew.

Apparently Smith didn't feel like waiting until after Christmas to make some history.

On Wednesday, Smith became just the second U of L player ever to earn all-conference honors in four different seasons, joining former Cardinal tight end Ronnie Ghent. Smith, who was named to the AAC's first team, also became just the fourth player in the history of the Big East/AAC to achieve the feat. 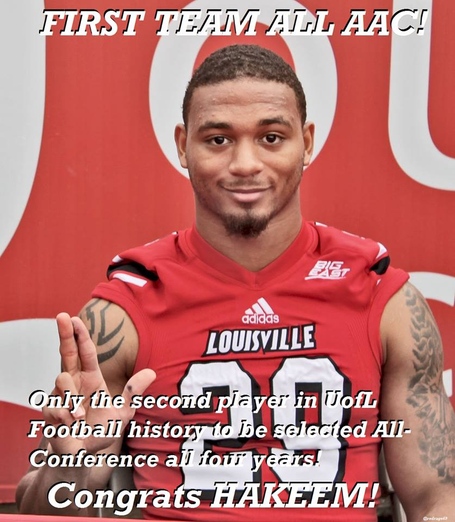 As if that wasn't enough, Smith consolidated Wednesday's news by accepting an invitation to play in the 2014 East-West Shrine Game on Thursday.

Smith will enter the postseason as Louisville's fifth-leading tackler with 42 total stops. The 2010 Big East Newcomer of the Year also boasts a career-best three interceptions to go with seven pass breakups.

We've made a pretty big deal about the fact that Russ Smith was a two-star prospect, but it's also a former status shared by Smith, who will leave Louisville with one of the best career resumes of all-time.

Congrats to Hakeem on his latest honors.