DJ Green is all ready for the Cards to come down and visit for the holidays. 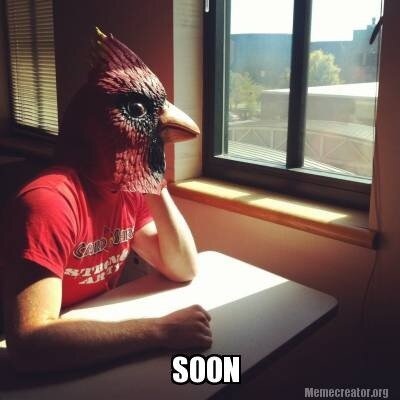 It's actually 17 days, which I guess is soon in relation to other things, like next Halloween.

Regardless of what happens, my four-day hangover is going to take the old tradition of missing the ball drop to a new level. I've already prepared an apology template to be used in lieu of Christmas cards.

According to the C-J, U of L is close to finalizing a five-team round-robin event in which the men's basketball would play four games at the KFC Yum Center over a 14-day period next season. The names of the teams involved have not been disclosed. 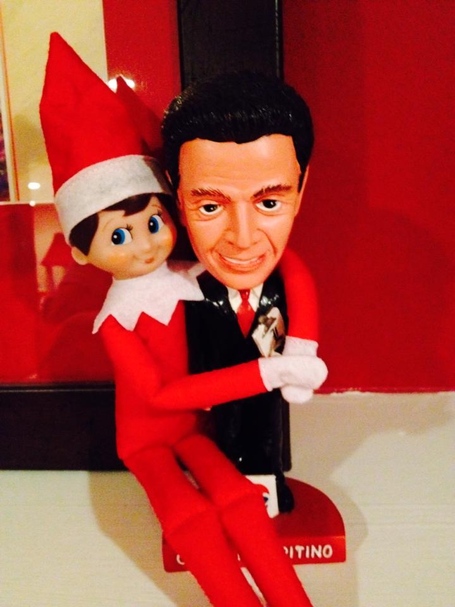 Bill Connelly breaks down all the potential college football playoff models and how they would look this season. Two of them feature Louisville, and in both instances the Cards are taking on LSU in the first round.

A committee will decide Wednesday if Louisville will get to host any NCAA championship events over the next four years. The city is a finalist for hosting 13 events, which is more than any other city. The host cities are expected to be announced around 1 p.m.

The fine folks over at Beaux Tied are having a sale on all their classy U of L items for the next two weeks leading up to Christmas day.

11% OFF ALL ITEMS today ONLY! 2 wks til xmas, stock is limited! http://t.co/rHxm6IMGBF & enter: "TWOWEEKS" @ checkout pic.twitter.com/zRKdTOA9VY

I own the belt, and let's just say it's earned a wave of compliments...all of them from Drew Deener, but whatever, he's famous so it counts triple.

Luke Hancock, Louisville: Maybe our expectations for Hancock were too high heading into the season given that he was basically a role player prior to the Final Four. But even as a role player, Hancock isn't doing his job. He's shooting 31.4% from the floor and 22.9% from three.

Well, if history's taught us anything it's that we'd probably be best-served completely counting Hancock out after an underwhelming first month of the season. Guy simply does not have the talent to play at this level, and it continues to show.

Shaking his belly like a bowl full of jelly: 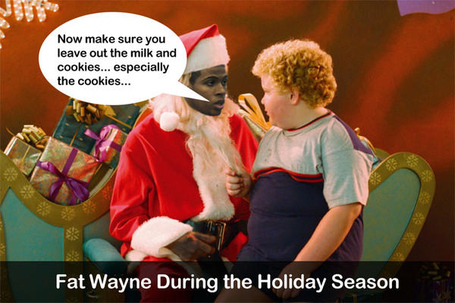 This is Russ Smith nearly killing a row of photographers and then converting an and-1 on the other end of the court approximately four seconds later.

SB Nation's Miami site, State of the U, examines the most prominent Russell Athletic Bowl storylines.

And there's no doubt this game could have a big affect on recruiting.

Need more nuggets? 4 star defensive end Demetrius Jackson verbally decommitted then recommitted to Miami yesterday. Among the teams he was rumored to be flirting with..... you guessed it the Cardinals.

Well Louisville just happens to be joining the ACC next season. This bowl game could very well be Round 1 in a 10 year Heavyweight ACC Brawl.

I am getting a new car today. Hocus Focus has been pushed well past her prime, a fact evidenced by her violent shaking when idling and the check engine light (which has been in a constant state of illumination for months now) flashing whenever the 55 mph mark is breached.

Hocus and I were never supposed to be. It was a hastily forced marriage following the untimely death of Kristin Cavalier (longtime readers may recall the story...woman ran stop sign, both cars totaled, very scary, very cold, wrecker took f---ing forever) back in late 2010 when I was in law school. She was there through a period of great transition, which included plenty of uncertainty, a handful of lows and some unforgettable triumphs. Hocus performed admirably under the circumstances, and although the basis of our relationship was awkward and somewhat cheap, I will miss her.

I get attached to things pretty easily.

Stick to the ring, JR.

Based on some of my followers, Saban stays at Bama, Mack retires & Charlie Strong lands at Texas. Don't know about Louisville job. #Crazy

A look at the top 10 goals from the recently-wrapped U of L men's soccer season:

Lorenzo Mauldin does not care for your slights, ESPN.

"You know what...as hard as we work as a Louisville defense we get no love from outsiders all I can do is laugh. #ButInsideImBurningUp" Mauldin tweeted Sunday night.

He added: "These commentators are really pissing me off saying that we are not inspired...are you serious?! We just went 11-1 how is that not inspired?"

I would enjoy reading a response to that.

Teddy gets a couple of shoutouts in this week's Alphabetical. 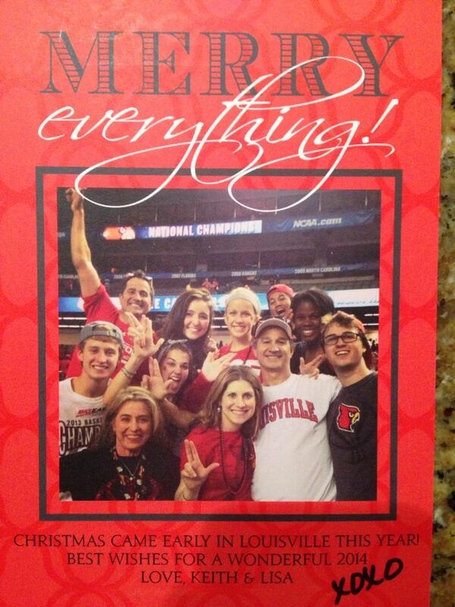 Our own Brandon Pry's slow motion video of Chane Behanan crashing into Terry Rozier is very cool and somewhat painful:

The Russell Athletic Bowl checks in at No. 9 on Athlon's list of the best games of the postseason.

9. Russell Athletic - Miami (9-3) vs. Louisville (11-1) - Dec. 28 at 6:45 p.m. ET
Next season, Miami and Louisville will be ACC foes. But for now, the Cardinals-Hurricanes matchup is just an intriguing bowl game, as there is some familiarity between these two programs and players. Louisville quarterback Teddy Bridgewater was committed to Miami during his recruiting process, and the Cardinals pluck a lot of prospects from the state of Florida. Coach Al Golden has Miami on the right track, and a win over Louisville would give the Hurricanes double-digit victories for the first time since 2003. With Bridgewater projected to be one of the top-five picks in the 2014 NFL Draft, this could be the final college game for the junior quarterback.

Master P continues to tie himself to the city of Louisville. One can only assume it's because he doesn't want to be too far away from Master C.

A pair of U of L hoops commits were in action Tuesday night and both performed well. Shaqquan Aaron poured in 25 points for Seattle Rainier Beach, while Jaylen Johnson had 13 points, 10 rebounds, 3 blocks, 2 assists and 2 steals in Ypsilanti's (MI) victory. 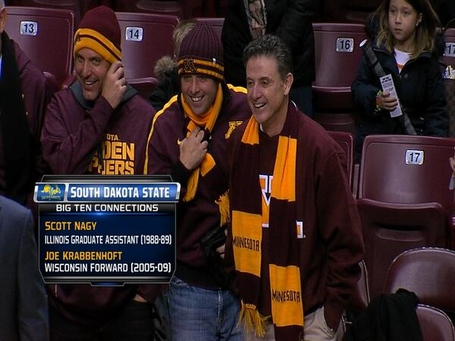 You would think Rick and Michael were both lifelong Hawaiians the way they're dressed.

I didn't mean that, I'm actually just really jealous of their scarves. I've never been able to pull off the scarf period, let alone a maroon and gold scarf indoors. I'm sorry I projected that insecurity onto you guys.

Art Carmody sat next to Howard Schnellenberger last night at the Lou Groza Award Banquet. He's either going to write about the experience on Card Chronicle, or he's going to be heckled mercilessly by me for the duration of 2014.

A nice story of Cardinal fandom from Jared Pedley.

Not sure where these came from, but they're fantastic: 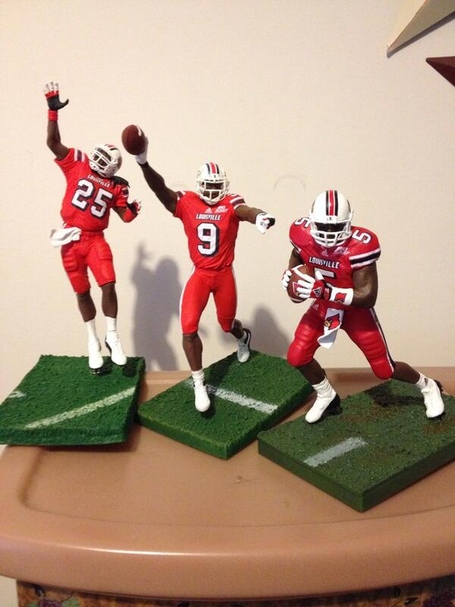 And finally, a sequence of searches yesterday led me to stumble upon this post, which had been written exactly three years prior.

Bridgewater has been the starting quarterback at Miami Northwestern - easily one of the two or three most well-known programs in the South at the moment - since his sophomore season. He is a huge name in the state of Florida and people are going to take notice of anything he does. The fact that Bridgewater is even taking an official visit to U of L is astounding. For him to commit would be...up to this point, unfathomable.

Regardless of how his college career played out, Teddy Bridgewater to Louisville would be a tidal wave that would effect this program - in a positive way - for years after his commitment.