U of L made its debut appearance on New Year's Day 1958, when Frank Camp's 8-1 Cardinals bested 7-1 Drake in the 23rd installment of the Sun Bowl from El Paso.

I was not alive.

The Bulldogs entered the game with national rankings in both the AP (13) and coaches' (17) polls, while U of L was unranked, but boasted the nation's leading rusher in Lenny Lyles.

The Cardinals were expected to ride Lyles for four quarters, but that plan was thwarted when the All-American suffered a leg injury on a kick return near the beginning of the game. With Lyles out, U of L turned to fullback Ken Porco, who wound up being named the C.M. Hendricks Most Valuable Player after carrying the ball 20 times for 119 yards and one touchdown.

Drake came to Tempe with one of the nation's most feared aerial attacks, but the Cardinal defense forced Bulldog quarterback Roger La Brasca to connect on just 10-of-33 passes for a meager 140 yards.

Cardinal wide receiver Ed Young caught the first of two touchdown passes to break a 14-14 second quarter tie, and start a string of 21 unanswered Louisville points that would put the game away. U of L's quarterback tandem of Dale Orem and true freshman Pete Bryant combined to complete 6-of-10 passes for 148 yards and a pair of scores.

Not surprisingly, there is zero available video on the Internet of this game, so you're just going to have to stare at this box score for a few hours and use your imagination: 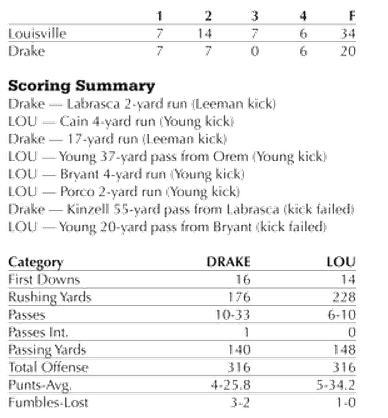 They're probably going to get more exciting, I don't know, maybe this was a mistake. Or maybe you're going to drop that Lenny Lyles injury tidbit on the crush you've been afraid to talk to for years and it's going to change your life. Maybe I get a courtesy invite to your wedding and wind up drinking too much.