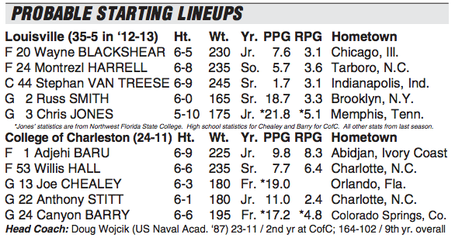 --Louisville will be unveiling its national championship banner 15 minutes before the start of the game. Fans are asked to be in their seats no later than 12:45.

--Today's game marks the start of the 100th season of Louisville basketball.

--The Cards enter this season riding a 16-game winning streak, two short of the longest in program history.

--Charleston is picked to finish third in its first season as a member of the Colonial Athletic Conference.

--Cardinal standouts Luke Hancock and Chane Behanan will both be on the bench Saturday, but neither will play.