Share All sharing options for: Game Day: Louisville At Connecticut 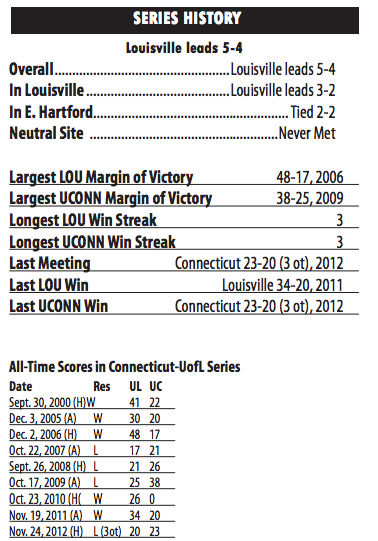 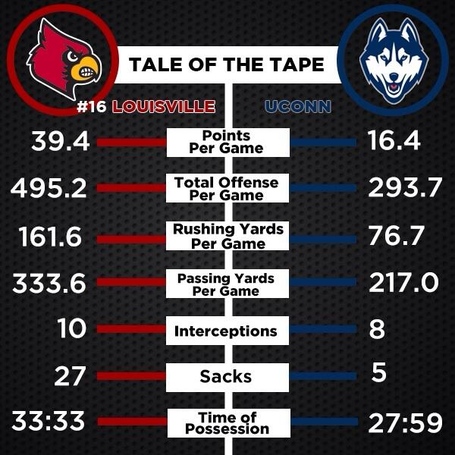 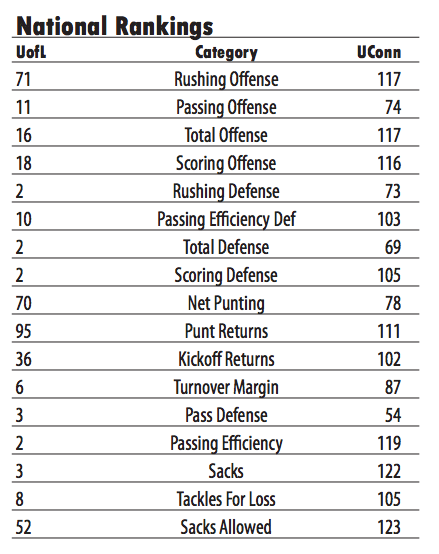 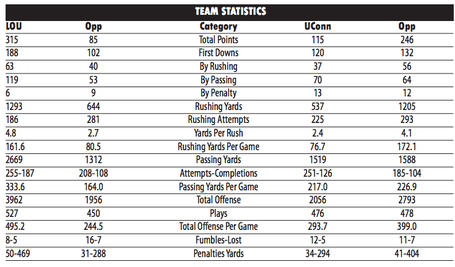 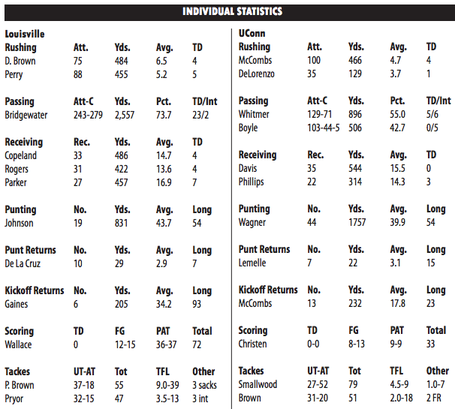 The Huskie offense has never been dynamic, but it typically has been successful. Short on star power, it has always just seemed to work. One or two good running backs and offensive lineman that open holes for those backs to run through. Quarterbacks that protect the ball pretty well and complete enough short passes to keep the chains moving and let the defense win the game for them.

This year's offense is a far cry from the ball control offenses described above. Chandler Whitmer was the top JUCO quarterback when he signed with UConn, but he hasn't lived up to expectations at all. He is one of three guys the coaching staff has tried under center this season and none of the three have been unbelievably impressive. True freshman Tim Boyle has started the last two games and he has a solid arm and solid presence. The issue is that he has been turnover prone and he doesn't have much to help around him. Casey Cochran has played well in his limited time, but he has played in nothing but garbage time so far. It's hard to really give him much credit when he's playing against second team defenses.

Lyle McCombs lit up Louisville for 165 total yards last year and put the offense in position to get points throughout the entire game. The Huskies won the game with their defense, but McCombs is the sole reason the offense was able to even get into field goal range to put enough points on the board to win the game. As we all know, Louisville struggles with smaller, quicker backs that can exploit cutback lanes. The defense is based on pressure and pursuit and McCombs preys on teams that over pursue. Louisville will focus on stopping the run game. But they must get McCombs to the ground or he will have a big game. He hasn't had a great season so far, but there's no doubt this offensive staff remembers what got them a win last year.

UConn is throwing the ball more than they have in the past but they still don't have any dynamic athletes to make big plays outside. Geremy Davis has made a handful of big catches over the last couple of years but outside of that, none of the receivers on UConn's roster have done much. They have decent size but not much speed to get behind a defense. The Huskies spread the field a lot and don't shy away from plays that take a while to develop so Louisville's defense will have to stick to their coverages to make sure they don't give away uncharacteristic big plays.

The offensive line is flat out bad. It's impossible to sugarcoat. They have given up more sacks per game than anyone in the country and they struggle the worst against edge pass rushers. Marcus Smith and Lorenzo Mauldin should have a field day. The line has been decent in the run game, but they aren't consistent enough to allow the offense to be the run first team they've been in the past. I don't really see that changing Friday.

Earlier this season, we witnessed what it was like when you lose a bunch of talent to the NFL when we played Rutgers. UConn got hit much worse. Seven starters from last year's game are gone. Four of them are active on NFL rosters right now. Programs like UConn don't just reload when they get hit like that. However, they don't typically become terrible like the Huskies have.

The defensive line has done nothing to put pressure on opposing offenses. The unit as a whole has three of the teams five total sacks on the season. Yes that's the least amount of sacks in the country. They are big and slow with no real athletes to chase down plays away from them. That leads to offenses having way too much time to turn small plays into big plays. Louisville will more than likely try to get the ball down the field in the passing game seeing as Teddy will have more time than he already usually has.

Another week, another stellar linebacker to go against. Yawin Smallwood is the best linebacker in the AAC (love you Preston). Smallwood surprisingly stayed in school last year after putting up 120 tackles and 15 tackles for loss. He hasn't skipped a beat this year and he is just everywhere. He hasn't made as many plays behind the line because of the lack of help from the guys around him, but he really is an unreal talent. Smallwood will likely help the defense take away some of the things Louisville likes to do in the middle of the field, especially the running back check-downs. It will be up to the guys around him to really have a chance of stopping anything else.

Ty-Meer Brown and Byron Jones were a formidable tandem at safety last year and did a great job teaming up with two stellar, future NFL corners. This year Jones has moved to corner and Brown has been needed to be more of a run stopper. Those two things have led to issues in pass coverage. UConn is respectable from a yardage standpoint when it comes to pass defense. The efficiency numbers aren't as great though. UConn is giving up nine yards per attempt. That's absurd. When the pass is actually completed it's for fifteen yards on average.

They are giving up a ridiculous amount of big plays and the lack of a pass rush is the reason why. These defensive backs are good. They can't cover receivers forever and that's what they've been asked to do all year. Louisville has done a great job protecting Teddy this year so things should be about the same this Friday. Two freshman will line up at the other two defensive back spots. Teddy will look to exploit their inexperience if the UConn defense of old somehow shows up.

I enjoy Friday night away football with friends as much as the next guy, but it's impossible to ignore that Connecticut is 0-7 and has absolutely nothing to play for at this point. It's also impossible to ignore the fact that there's a friggin' national championship banner going up inside the Yum Center tomorrow afternoon. That might have stolen a couple of excitement level decimal points.

Giving the zip-up a second shot after the UCF debacle because I really enjoy it and would prefer for it to have at least a .500 record should the opportunity to wear it in a non-CC Headquarters situation arise again.

We lose and I burn it. That's a promise.

We're having people over to the Headquarters for what should be a joyous celebration of Cardinal football, the start of college basketball season and Brandon Lytle's birthday, but no food choice has been made as of yet. If it happens at some point over the course of the next three hours, I'll announce it during this afternoon's taping of CN|2 Sports.

The young man has noticed the lack of attention he's been receiving in recent weeks. 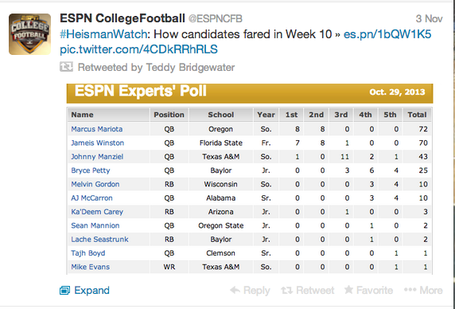 I'd expect him to respond as expected.

I was going to go with "Louisville records a shutout," but this feels like a step above that. Let's see how deep this thing can go.

No day greater than game day, let's get 'em!! #BeatLouisville

Yes, this is a student assistant. You'll have to forgive the actual members of Connecticut's 0-7 football team if they aren't doing too much shit-talking.

--Interim coach T.J. Weist is 0-3 at UConn. He took over for the fired Paul Pasqualoni after the Huskies began the year 0-4.

--Louisville's defense has given up 85 points this season, is allowing opponents an average of 80.5 rushing yards, and has forced 17 turnovers this season. UConn, meanwhile, has scored 115 points, is averaging under 77 yards rushing per game, and has committed 17 turnovers.

--Teddy Bridgewater has thrown at least one touchdown pass in 20 consecutive games.

--Connecticut ranks dead last in the country in sacks for, and is next-to-last in sacks allowed.

--Louisville has scored at least 20 points in 24 consecutive games. The last time the Cards were held below that mark was back on Nov. 12, 2011 when they fell to Pittsburgh, 21-14.

--Connecticut's last win was against Louisville.

--Larry Taylor is a loser.

--U of L has allowed just 47 total points in its six non-UCF games this season. The Cards surrendered 38 in their loss to the Knights.

--UConn is 2-21 all-time against ranked opponents. They've already lost to top 25 foes Michigan and Central Florida so far this season.

--When scoring 20 points or more in a game under the direction of Charlie Strong, the Cardinals' record is 31-7. Louisville is also 21-3 under Strong when holding opponents to 20 or fewer points.

--"I think there is a lot of hype for it and a lot of players are fired up. It's a nationally covered game and a Friday night game. I tell them the same things; if we can make more plays than them, we're going to win the game. That's got to be our focus. You have to use that hype, that momentum and intensity on the football field to make good decisions, to be physical, and to make plays. That's what it comes down to. Yes, our guys are fired up. But let's be fired up in the locker room after the game after we execute and use that energy and mentality." --UConn interim coach T.J. Weist

--"I told our players let's not look at their record, let's worry about ourselves. We need to go up there and get started well and get going good." --Charlie Strong

--"We just have to worry about us first and foremost. They could come in and potentially beat us if we're not on our P's and Q's." --Marcus Smith

--"This is a great opportunity for us to go out there and showcase what we have. We haven't done that a lot this season." --UConn LB Yawin Smallwood

--"Last year, they came in and stole one from us. We want to return the favor and go up and steal one from them on their home field this year." --Marcus Smith

--"I told our team, last year's game means nothing because it was last year. It's a totally different year, it's a whole different everything." --UConn interim coach T.J. Weist

--"We've got five more games left this season. We definitely do not want to be a part of one of those UConn teams that had the worst record ever so I feel like it's just playing for pride now." --UConn LB Yawin Smallwood

--"We're sitting here 7-1, wishing we hadn't lost the one, but it's over with now. You just like the way the team has developed and become a football team." --Charlie Strong

It's been real, Huskies.