Louisville Bounces Back With Rout Of Southern Miss

Share All sharing options for: Louisville Bounces Back With Rout Of Southern Miss

Louisville responded to its first loss of the season the way Rick Pitino teams typically do, and routed previously unbeaten Southern Mississippi 69-38 at the Yum Center Friday night.

Chris Jones came off the bench for the first time in his Cardinal career and wound up scoring a game-high 18 points. On the flip side, Jones finished with four turnovers and zero assists.

Starting in Jones' place was freshman Terry Rozier, who hit his first three 3-point attempts and finished the game with nine points. Fellow freshman Mangok Mathiang, who started in place of Stephan Van Treese for the first time this season, snagged seven rebounds and had three blocks.

The star of stars on this night, however, had to be the look on Chris Jones' face when Golden Eagle Michael Craig threw down one of the most vicious dunks the Yum Center has ever seen. 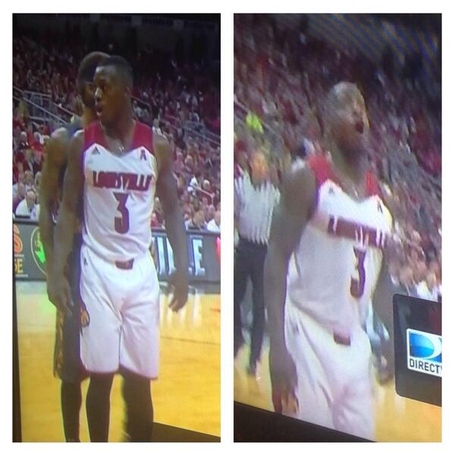 If you missed the dunk itself, I'm sure you'll be able to find it before you go to sleep.

After one of the most disappointing defensive efforts in years, it was extremely encouraging to see the Cards come out and put the clamps on a squad that had yet to lose through the first three weeks of the season. We also vicariously beat DePaul, which is a nice early holiday treat.