People freaking out about one bad game in November and Brayden Wolf's over here all like, "it's still Ls up."

If there had been any doubt before, Titus Teague cemented his place as one of my favorite all-time Cardinals on Saturday night with this Instagram post: 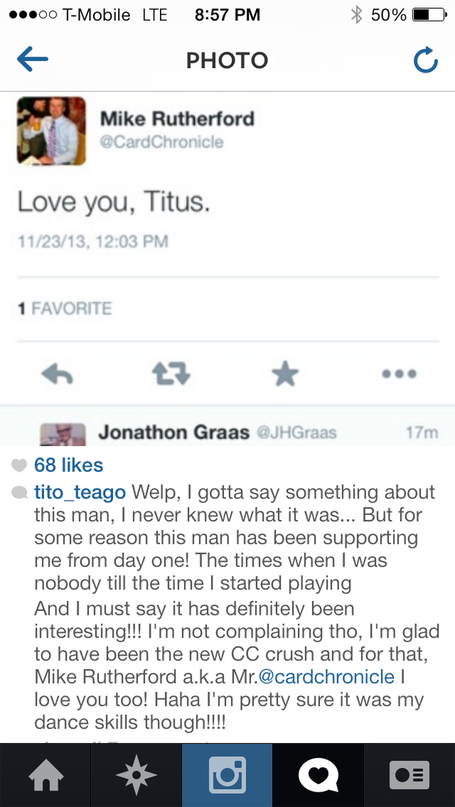 The Titus Teague thing started (of course) because he was wearing the famed No. 18 jersey of Arthur Carmody that I had purchased a couple years earlier, but the affection quickly became more about the fact that Titus is an awesome dude whom everyone at U of L seems to love...and who enjoys Space Mountain as much as the rest of us.

The dancing comment also led me to go back and relive the glory that of this moment (and this one), which was probably the highlight of what will always be one of the most memorable weeks in Card Chronicle history.

Titus, you brought us all a tremendous amount of happiness for the past four years, and I speak for everyone when I say that we wish you the best in whatever you choose to do going forward. Your legend will only grow around these parts.

Yahoo's Jeff Eisenberg says no one saw North Carolina's upset of Louisville coming, but that it's not the end of the world for the Cardinals.

Louisville certainly felt the absence of graduated shot blocker Gorgui Dieng and foul trouble for forward Montrezl Harrell, but one of the biggest reasons for North Carolina's 54.2 percent shooting was the Cardinals' uncharacteristically feeble transition defense. Time and time again, the Tar Heels would leak out in transition and turn a missed Cardinals jump shot into an uncontested fast-break dunk.

There were plenty of errant Louisville jump shots too because North Carolina geared its defense to make the Cardinals win from the perimeter.

A zone defense limited driving lanes and the length of the North Carolina frontcourt altered shots when Louisville did manage to attack the rim. Guards Russ Smith and Chris Jones had 36 and 18 points respectively, but the Cardinals attempted 30 3-pointers and dished out only three assists as a team, not exactly the formula for solving a zone.

The good news for Louisville is that a soft schedule affords plenty of chances to work out the kinks before the next test, a Dec. 28 road game at Kentucky. As for North Carolina, this win is a crucial momentum builder with back-to-back games against improving UAB and Kentucky up next.

The U of L men's soccer team saw its season come to a close with heartbreaking 1-0 double overtime loss at Michigan Sate in the second round of the NCAA Tournament on Sunday. The loss snapped the Cards' streak of three consecutive runs to the Elite 8.

"I thought there was a lot of growth this season and to see so many young guys playing significant roles in the success of the team was very positive," said coach Ken Lolla afterward. "In that regard, looking forward is very exciting. However, I still think there were a lot of areas where we didn't' get everything we could have this season and we really didn't hit our potential at the end of the season, which is a bit disappointing."

The Cards now look forward to their move to the ultra-competitive ACC.

Sunday wasn't all bad, if only because this happened: 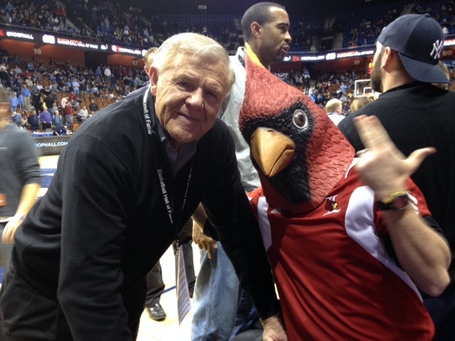 The finalists for each of college football's major awards have been announced, and it's a list that includes zero Cardinals. I thought Teddy would probably be a Davey O'Brien finalist, but I guess being the first quarterback drafted will just have to serve as a consolation prize.

The new "Year of the Cardinal" Maker's Mark bottle will only cost you a cool $2,000. I'm assuming that Montrezl's dunk in the championship game plays on the side of the bottle on a loop or something like that.

If Rose Murphy said it, then so it is.

@CardChronicle we are no longer CCBMs. Ms rose Murphy has dubbed us "the bird people" so it is written... So it shall be.

The media folks in Cincinnati are already talking Cards/Bearcats.

No, YOU don't know you're beautiful, Louis from One Direction. 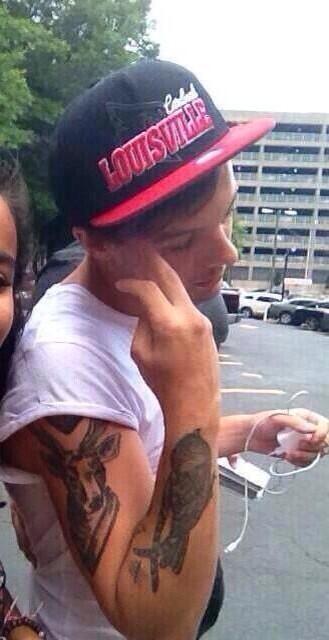 Step your game up, Biebs.

Louisville's next home basketball game is against Southern Miss on Friday, which just so happens to be the same night as Light Up Louisville. That being the case, the KFC Yum Center has constructed a special traffic plan for the evening. I'm sure it will work perfectly and no one will be frustrated.

Speaking of Friday night's game against Southern Miss, the Golden Eagles will come to town with a perfect 6-0 record, which includes a 75-68 win at DePaul. Basically, this may be as close as we get to a DePaul Day this season. For that, I am thankful.

A look back at the week that was in Cardinal sports:

So the C-J has a video (which includes an interview) from the Barren County courthouse where Kevin Ware appeared and agreed to pay $268 in fines on Monday.

Remember how much we made fun of the Lexington media's TMZ-esque coverage of Mike Hartline's arrest? It's starting to feel like we're about a year away from the same thing happening here.

Here's when I knew we were in trouble on Sunday:

Right from the get-go, it just didn't feel right.

Your complete 2014 Louisville baseball schedule has been released.

According to recruiting guru Jerry Meyer, new U of L signee Matz Stockman will be rated as a three-star recruit. Ok, but he's at least a seven-star Internet recruit.

Get this guy on the coaching staff yesterday. 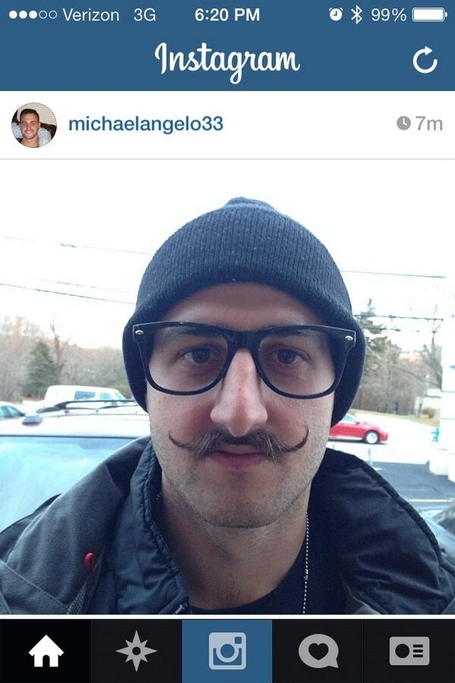 Cleveland State's coaches were none too pleased about the whistle they got inside Rupp Arena Monday night. A Bluegrass State holiday tradition as storied as "A Christmas Carol" at Actor's.

The biggest bright spot on Sunday was the U of L women's team fighting off a tough Florida State squad for a 69-59 overtime win at the Yum Center. The fourth-ranked Cards return to action Wednesday night when they head to Bowling Green to face Western Kentucky. They'll then round out their big week with a showdown at No. 7 Kentucky on Sunday at 1 p.m.

1. What was the biggest takeaway from Sunday's North Carolina-Louisville game: how well Carolina played or how poorly Louisville performed?

Andy Katz: North Carolina's performance deserves more praise than the concerns raised by Louisville's inability to defend in transition and inside. Those can be fixed. UNC has a go-to scorer in Marcus Paige and two potential rising stars inside in Brice Johnson andKennedy Meeks. This was as important a nonconference win as the Tar Heels have had under Roy Williams since winning the national title in 2009.

Dana O'Neil: I'll be the glass half empty here. I was flat-out stunned at how poorly Louisville played, especially defensively. This was the first real test of the season for the Cards, and they failed miserably, especially with their bread and butter. Their transition defense was lazy, their interior defense nonexistent. I'm pretty certain practice will be oodles of fun this week for Louisville, so I suspect these issues to be addressed, if not solved, quickly.

Myron Medcalf: I was impressed by UNC and the production that the Tar Heels' young bigs gave them in a huge game. Johnson and Meeks were forces inside, especially becauseMontrezl Harrell struggled with foul trouble all afternoon. Meeks and Johnson could give the Tar Heels an edge in the ACC if they continue to play that way.

My stance on Christmas activities before Thanksgivings has been well documented, but there are always going to be exceptions. 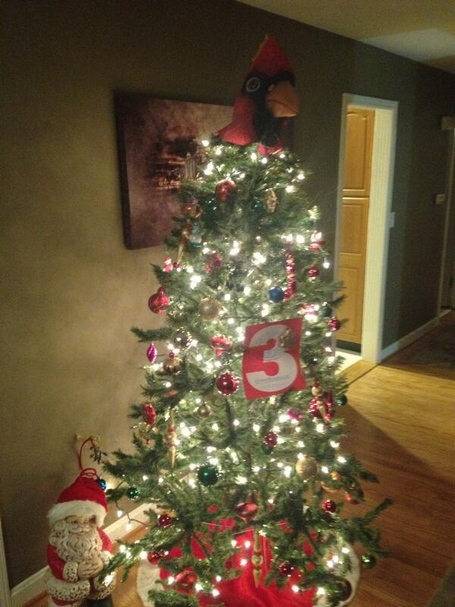 The lighting there is just perfectly terrifying.

It's an insider story, but ESPN's Jeff Goodman says it's not time to worry about Louisville yet.

The biggest mystery of the 2013-14 basketball season so far: How the hell can Seth Greenberg be 0-for-the-year on pronouncing Montrezl Harrell's name correctly when the kid was originally committed to play for him at Virginia Tech?

The obvious joke is "I guess that's why he's not coaching anymore," but it's not like the issue in question is a bad prediction or a widely-disputed Xs and Os claim. This is a person you had to have had a pretty close relationship with at some point, or at the very least a person whose name you had to have heard a fairly significant number of times.

Louisville has extended a scholarship to another 7-foot foreign big man. This time it's Michal Cekovsky, a native of Slovakia who plays for the same Canaris Basketball Academy squad as recent U of L signee Matz Stockman. Cekovsky is considered by many to be CBA's best prospect, and has also been offered a scholarship by Arizona.

And finally, I'll be joining the folks over at the Reddit college basketball page for an AMA (ask me anything) session later on today. Feel free to stop by and ask stupid ish that I can give stupid answers to.